How is 2015 panning out for you so far, I wonder? Most people, when asked this question, respond in one of three ways.

First option: everything is going swimmingly. The SDG negotiations are well underway in New York. Preparations are in hand for the Financing for Development meeting in Addis Ababa. And the UNFCCC is making stately progress towards a new climate deal, most recently agreeing a negotiating text in Geneva. Come December, and we will be able to celebrate.

Second option: 2015 has ‘disaster’ written all over it. Yes, negotiations are proceeding; and, yes, of course something will be agreed in Addis, New York and Paris. But the SDG framework will be incoherent, there won’t be enough new money to declare a breakthrough in Addis, and as for Paris, well, the most likely outcome is a weak agreement subject to five yearly review. That, by the way, is an optimistic version of the pessimistic point of view. Some people think that the G77 and the rich countries will end up so polarised that no agreement is possible. ‘Have you seen the negotiating text?’, they mutter to each other, ‘this feels like a Copenhagen in the making’ . . .

Third option: a world-weary shrug. ‘Yes, everything looks pretty gloomy just at the moment, the G77 and the rich countries are busy digging embankments and building emplacements, but it’s OK, this always happens, there is bound to be a last-minute breakthrough, and we will all live happily ever after’.

Personally, I think that the first position is unduly optimistic. The second and third positions are both plausible. What predisposes to one outcome or the other will be the skill with which countries negotiate the complex, simultaneous equation that links the SDGs, FFD and climate. There is a solution, but it will require careful choreography.

Just to be clear about the problem, it makes no sense to negotiate these three elements of the 2015 agenda in isolation from each other. There are many links between the negotiations, not least that the SDG framework refers to climate and that achieving goals in one sphere is contingent on them being achieved in another. One key link is money: ‘development’ finance as well as ‘climate’ finance, offering proof that richer countries are serious, as well as an assurance to poorer countries that it is safe to sign up. However, there are other links, for example through the FFD emphasis on wider ‘means of implementation’. Technology transfer would be an example. I will come back to that.

Are countries all aware of the linked nature of the negotiations, I wonder? Is there a common strategy? I worry that these various negotiations are being conducted by different people in different rooms. In the UN context, there are separate institutions responsible for each, though accountability eventually coalesces in the person of Ban Ki Moon. That is why I wrote about him fifteen months ago as Ben Hur, needing to hold in harness a chariot drawn by a team of sometimes headstrong thoroughbreds: not Ban Ki Moon, I suggested, but ‘Ben’ Ki Moon. Below that level, you often hear observers comment that the climate and SDG communities live in separate worlds. I don’t know to which world the FFD belongs. Are national governments well-coordinated? Some are, I’m sure, but not all.

As countries focus on the choreography of 2015, there are some key elements of context:

First, all the agreements in 2015 are under the UN umbrella, so require the unanimous support of all 193 members of the UN to achieve consensus.

Second, both the SDGs and the climate agreement are universal, i.e. global in scope, requiring action in all kinds of countries, rich and poor.

Third, the division of the world into two big blocs, viz G77+China on the one hand, and the developed countries on the other, still seems to hold. At least, the G77+China seem to work hard to hold the group together.

However, fourth, there are many different interests within the blocs, as between: Least Developed Countries, Low Income Countries, Lower and Upper Middle Income countries, and High Income Countries; or climate negotiating blocs like the Small Island Developing States; or informal groupings like the Cartagena Group of 27 developed and developing countries seeking an ambitious climate deal; or the 17 members of the Major Economies Forum; and, of course, within regional blocs like the EU.

Fifth, the actions required are ambitious for all countries, but especially for developing countries. Some are low income and genuinely resource-poor, and can expect continued aid flows. Others are in the process of graduating from aid and cannot expect to receive development aid in the medium term. All, however, will expect assistance with mitigation, adaptation and other adjustments required in a warming and decarbonising world. Hence the emphasis on ‘common but differentiated responsibilities’.

Sixth, the climate talks are complicated by notions of historic responsibility (‘why should developing countries pay for a problem they did not cause?’) and by the idea of compensation for ‘Loss and Damage’. There is no agreed algorithm for allocating future rights to emit CO2.

Seventh, there are real limitations to the cards available to different players. On the developing country side, the main tool is moral suasion, most evidently seen in the plea by island states that are likely to disappear if sea level rises. On the developed country side, the main tool is probably money, but in limited supply post-crisis, and with no enthusiasm for thinking of climate finance as additional to aid. That poses special problems at a time when oda is being concentrated on the poorest countries, whereas climate finance is needed equally by less-poor parties. Additional tools will need to be found.

Eighth, the timing is awkward, with concrete outcomes expected from the financial talks at the FFD conference in July, two months before the final negotiation of the SDGs in September, and four months before the opening of the climate talks at the end of November. Further, the SDG text will need to refer to climate, not knowing what the Paris outcome will be.

In this context, ninth, it is not helpful that the timetable for analysing the contributions countries expect to make to emission reductions, their so-called Intended Nationally Determined Contributions (INDCs), has slipped, with the UNFCC expected to produce a synthesis only by 1 November, just a few weeks before the Paris talks open. The current indications are that ‘contributions’ (technically not ‘commitments’) will fall well short of those needed, putting great pressure on negotiators.

Finally, tenth, there are only limited incentives to reach a deal, certainly on the SDGs. It will be embarrassing to have a weak outcome document in September, but in the end the world will continue to turn on its axis. The same, actually, may be true of the climate talks, since other drivers of change may be as influential - national and regional carbon trading schemes, for example, or technical change.

Faced with this level of complexity, my first call would be to the specialists at the Harvard Negotiation Project. I have admired their work ever since I first read Getting to Yes, but also since I attended one of the best-ever workshop sessions at Davos, back in 2003, with a team from Harvard and a small group of participants, including the chief Israeli and Palestinian negotiators, a senior general from NATO dealing with Milosevic, the head of the WTO, and some key environmental negotiators. If they could help with those varied and high-stake negotiations, then now is the time to start handing them retainers and consultancy contracts to work on the 2015 agenda.

Maybe Harvard is already on the case. On the off-chance that they are not, here are some personal thoughts of my own. No retainer or contract required.

There is, of course, a literature on brokering global deals. I have contributed myself, as have many others – Ngaire Woods, Ian Goldin, David Victor and Robert Falkner all spring to mind. My own eight point programme, rooted in work on UN reform, and I know, sorry, that I am always citing this, is as follows:

In practical terms, here are some specific ideas for 2015. The initial points are about leadership and management, but the substance follows.

To conclude, the main point is that the 2015 negotiations are all linked and need to be treated as one. A successful outcome is possible, but only with careful, integrated planning. The alternative is grim, especially with regard to climate change.

You might be a Prime Minister or President reading this, or just a citizen. In either case, here is a handy cut-out-and-keep prompt sheet on how to handle 2015. 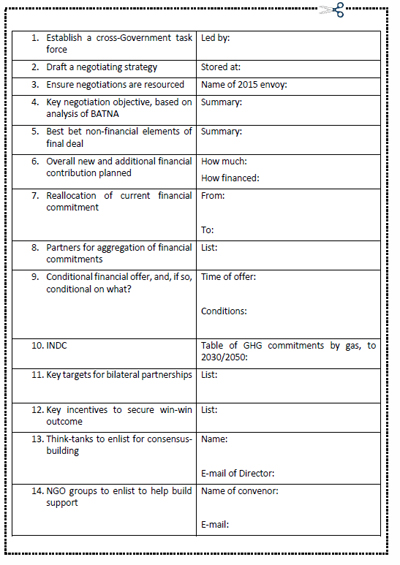