There are two answers to the question of what’s next on climate change. Actually, three. Or maybe four. The first is that we’re going to hear a lot more about INDCs, Intended Nationally Determined Contributions, essentially the country pledges that will form the basis of negotiation in the run-up to Paris. The second is that a big effort will be needed to make sure that the SDGs to be agreed in New York in September are climate compatible. The third is that in the real world, countries, cities, companies and households will continue to take action on climate change. And, finally, because these actions are necessary but insufficient, CO2 concentrations will continue to rise, as will the incidence of extreme weather events and the risk of irreversible long-term disruption.

The scene has been set by the publication of the various reports of the IPCC Fifth Assessment Report, particularly the Synthesis Report, which came out at the beginning of November, and also by UNEP’s Emissions Gap Report, also published in November. I represent CDKN on the Steering Committee of the latter, so will use that. It is mostly consistent with the IPCC.

The key thing to know from the Emissions Gap Report (EGR) is that there is a finite budget for greenhouse gases if we want a likely chance of keeping warming to 2oC – and that we are well on the way to exhausting it. It is important to distinguish between long-lived CO2 and shorter-lived other gases, like methane. In round numbers, the remaining budget for C02 is about 1000 Gigatonnes. Emissions are of the order of 35-40 Gt a year, and rising. That gives us 25 years at current rates. EGR uses integrated assessment models to estimate least-cost pathways for the future, and those suggest that the world has to reach zero CO2 emissions by about 2065. That’s not ‘close to zero’ or ‘on the way to zero’. That is zero CO2, full stop.

After that, the only option is to remove CO2 permanently from the atmosphere, by such means as planting trees to increase biomass, or carbon capture and storage. For non-CO2, the picture is similar, but the timescale is slightly more generous because the gases remain in the atmosphere for a shorter period. Even so, the zero emission point arrives before 2100.

Now, it would theoretically be possible to leave everything until the last minute, spend the budget, and then stop. However, that is not realistic – or desirable. As EGR points out, delay ‘will bring much higher costs and risks later on, such as:

Instead, EGR estimates optimal pathways to zero, again using integrated assessment models. I know that IAMs are dependent on many assumptions, and that they are controversial, but the general principle of staged decline is plausible. Here, EGR looks at all greenhouse gases, in gigatonnes of CO2 equivalent. Current emissions are about 54Gt and rising. The required figures are: for 2025, 47Gt; for 2030, 42 Gt; and for 2050, 22 Gt. Even then, some CO2 removal may be necessary.

Of course, the numbers are subject to margins of error, indicated in Figure 1 – and I don’t quite know why we did not stick to CO2 rather than shifting to all GHGs. Anyway, the picture is clear enough. 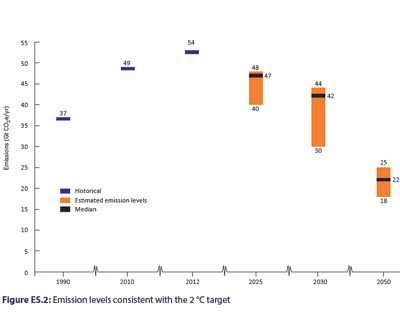 It is also worth noting that pledges need to be met for these numbers to hold. EGR reviews the state of implementation. It concludes that some countries or groups of countries are on track to meet their pledges, and others are not. And it also points out that some countries meeting their pledges are doing so because the pledge itself was unambitious. Anyway, Brazil, China, the EUEuropean Union 28, India and Russia are on the positive side of the ledger, while Australia, Canada, Mexico and the US are not: as EGR puts it, they ‘are likely to require further action and/or offsets in order to meet their pledges’.

The size of the gap puts the current debate in context. There has been a broad welcome, for example, for the EU’s recent Framework for Climate and Energy, and for the joint US-China announcement on emission reductions. These are undoubtedly important in political terms, and will help impart momentum to the negotiations in 2015. On the whole, however, these do not change the existing picture significantly. The EUEuropean Union commitment will contribute less than 0.5 Gt to the global reduction required.  The China commitment that emissions will peak in 2030 does not yet mark a major reduction. The US reduction represents a small acceleration in reduction over the existing target. There is a useful analysis of the US-China agreement by Taryn Fransen and colleagues at WRI. Google the agreement, and you will find a clear consensus that much more needs to be done.

This brings us to the INDCs, the country pledges expected in the first half of 2015. The format has been much discussed, with a debate about whether adaptation should be included, as well as finance. The core issue, however, is mitigation, and the core policy question is this: how will a maximum emission quantity of 42Gt in 2030 and 22Gt in 2050 be divvied up among the parties expected to sign a new climate agreement in Paris in 2015? That is a philosophical question, of course, and a highly political one. There are a couple of things to say.

First, the contributions of most countries will be symbolic but largely immaterial to the question of whether global targets are reached. That is because current and likely future emissions are highly concentrated. The World Resources Institute has an excellent compendium of emissions data, known as CAIT. This shows that in 2011, 15 countries or country groups (counting the EUEuropean Union 28 as one) accounted for 75% of all greenhouse gas emissions, including from forestry and land use. The other 160 odd countries in the database accounted for less than 25% between them. China was the largest emitter, accounting for 22% of the total, the US was second (13%), the EUEuropean Union third (9%), India fourth (5%).

There is an interesting illustration of this. When Japan reduced its 2020 pledge, after Fukushima, from a 25% cut from 1990 levels to a 3.9% cut on 2005 levels, the difference was equivalent to an extra 356 million tons of CO2 a year. That additional load on the atmosphere is equivalent to the total Co2 emissions of the 112 least-emitting countries in the world.

Second, aggregate emissions data say nothing about per capita contributions, which remain much higher in developed countries than developing ones. EGR shows total GHG emissions from OECDOrganisation for Economic Cooperation and Development countries in North America still to be above 20 MT CO2e/capita, whereas those for most regions of the world cluster around 5 MT CO2e/capita.

Third, neither aggregate nor per capita emissions provide an automatic template for future allocations. The issue of historic responsibility and common but differentiated responsibilities will certainly play a part in the 2015 negotiations. See, for example, a recent report on the global carbon budget by Global Carbon Project, examining different ways of calculating shares. The report concludes that some compromise will have to be found between future allocations based on the share of current emissions and allocations based on pure equity: they call this the ‘blended’ outcome. Figure 2 contains the key diagram. It shows the EU, for example, as being ‘entitled’ to between a minimum of 7% of global emissions (based on population) and a maximum of 13% (based on its current share): the ‘blended’ quota is for 10%.  (Don’t ask me why the EUEuropean Union share is different to the one in the CAIT database – probably a different set of GHGs). 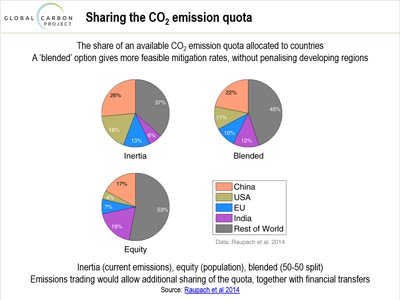 It may be that ‘facts on the ground’ shape the negotiation. I follow the Climate Group (@climategroup) on Twitter, for a constant stream of positive stories about mitigation actions, including investments in clean energy and the roll-out of other new technologies. EGR has also been a valuable source of encouragement, including this year on the potential of and high returns to investments in energy efficiency. The New Climate Economy Report similarly makes the economic case for transition to a green economy: I have reviewed it here. And, of course, CDKN is much engaged in supporting mitigation actions in the developing world.

Nevertheless, the fact remains that the gap between where we are headed and where we need to be is large. The world needs to find additional reductions of close to 17 GT in 2030, even if countries meet current pledges. There should be no ambiguity when INDCs come to be added up. Only one set of numbers matters: not intensity of carbon use, not per capita emissions, not rates of decline, but one simple estimate of future national GHG emissions.

Just finally, the other element in the equation for 2015 is the finalisation of the Sustainable Development Goals, with negotiations running through the first part of 2015 and the final text to be agreed in New York in September. I’ve commented before on the mutual inter-dependence of the climate and poverty reduction agendas, and on the somewhat patchy coverage of climate change in the current versions of the SDG goals and targets.

CDKN also has important work on this. Helen Picot and Nicholas Moss conclude that a stand-alone goal should be retained in the SDGs – but that this must be alongside the mainstreaming of climate change into the other goals, so that climate and development do not become siloed. Further, the SDGs should be drafted in a way that allows for interpretation in a nationally relevant way and that is useful for informing national development plans – for example, green growth strategies – as well as reducing countries’ vulnerability to climate change. Goals should be ‘climate smart’. Zero-Zero looks like a plausible long-term target: zero poverty and zero emissions.