Seven indivisibilities and a conundrum: how to deliver women’s empowerment

I was pleased to be asked to moderate the day-long High-Level Event on Women’s Economic Empowerment and Sustainable Development, held in Riga on 2 March. Normally, I don’t write detailed notes when I have been moderating, because there has been too much else to think about (Are we keeping to time? Why does that person in the fourth row have their eyes closed? What exactly was that last intervention about?). I am doubly cautious when I don’t normally write about the topic, as in this case. However, on this occasion, I thought I might share my framing of the conclusion at the end of the day. Others might or might not find it useful.

My conclusion reflected a very full day, put together by the Latvian Government as a contribution to the European Year of Development. There were 23 speakers altogether, including the former President of Latvia, Vaira Vike-Freiberga, the current and past EUEuropean Union Development Commissioners, development ministers from five countries, and other really excellent speakers from international organisations, research institutions, NGOs, and the private sector. The audience was pretty good too! Well done, Latvia. Videos of all the sessions are available here. There was a valuable background paper by Helen O’Connell, for ODI.

We tried to make the discussion as practical as possible, focusing on the positioning of gender in the post-2015 SDG framework, and the forthcoming revision of the EU’s Gender Action Plan. There will be an official report of the conference. This is not it. However, I suggested at the end that discussion during the day had been shaped by seven ‘indivisibilities’ (actually, if you watch the video, there were only six, I’ve added one). We also discussed an unresolved conundrum. I did not take detailed notes. This is a personal take.

The seven indivisibilities are:

I’m sure that people who work on gender will say either that all this is obvious, and/or that I have missed a lot. Probably both. Still, it seems to me that the seven indivisibilities capture some important elements of gender planning and gender action plans.

There is one more issue, that we did not resolve, the conundrum that I referred to earlier. It seems self-evident to argue that results are what matter, that results frameworks can drive policy and implementation, and that effective management of results requires measurement. More than one speaker in Riga, in fact nearly every speaker, talked about the importance of gender goals and targets in the post-2015 framework, and about the need for gender-disaggregated data to measure progress. These data needed to include data disaggregated by age, so as to capture the special problems of young girls and older women.

Well, yes, but there are two problems. The first is that we know the SDG framework is painfully over-loaded, currently with 17 goals, 169 targets, and, we learned last week, as many as 303 indicators. I’ve written and tweeted to death on this subject (see, for example, here and here). Bottom line: the currently proposed framework is unmanageable, lacking in logical structure, and impossible to use for setting priorities.

The second problem is the difficulty and cost of collecting data. Morten Jerven has written a number of blasts on this subject – see, for example, here. His four Venn diagrams have been widely quoted and are reproduced below.  His estimate of the total cost of collecting the data required by the current SDG framework is $254 billion over 15 years. 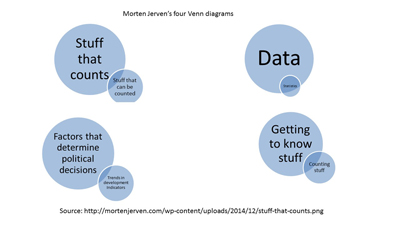 We discussed this conundrum in Riga, the difficulty of balancing the desirable against the practical. I offered a solution, which was to seek a small (very small) number of portmanteau targets and indicators, that could act as canaries in the cage. Under-five mortality of girls could be one such, or nutrition status. Others talked about participation in parliaments, or disparities in earnings. Debapriya Bhattacharya had a more radical suggestion: that no child’s gender should be determined at birth, and that children should be asked to choose a gender when they could see how the world worked! I don’t think that was serious.