The UN Secretary General published his long-awaited synthesis report on post-2015 on 4 December. I think he has hit the ball out of the park: not quite far enough, just yet, to secure ultimate victory; but a powerful stroke which provides strong indication of things to come.

I say this not because I think the Report is perfect, though I do think it is pretty good; but rather because Ban Ki Moon’s team have displayed nimble footwork and played an intelligently weighted stroke. Skip to the end to read my thoughts on how to play the next few overs (hint: drop the growth goal).

Taking back the stick

Let’s leave the cricket metaphors to one side and talk about substance. There was a problem awaiting Ban Ki Moon – I nearly said ‘trap’ - set by the General Assembly, which decreed in September that the main basis for the final stage of negotiating a post-2015 framework should be the report of the Open Working Group on post-2015, which reported in July. That must have come as an unpleasant surprise, since the assumption had always been that the SG’s report would provide the negotiating text. Instead, the GA announced that it

‘Decides that the proposal of the Open Working Group on Sustainable Development Goals contained in the report shall be the main basis for integrating sustainable development goals into the post-2015 development agenda, while recognizing that other inputs will also be considered, in the intergovernmental negotiation process at the sixty-ninth session of the General Assembly.’

The SG’s report as merely ‘another input’: oh  dear. The apparent downgrading might not have mattered had the OWG Report been a model of logic and concision, with a compelling and easily communicated narrative – but it was not. Instead it offered 17 goals and 169 targets, operating at different levels of detail and specificity: an incoherent and over-burdened Christmas tree. See my review here. I know lots of people like the report, and that others are worried about what might happen to favoured topics (e.g. sexual and reproductive rights, or political freedom) if the negotiation is re-opened – but I’m with those who say that the OWG framework is not satisfactory as a final outcome.

From that perspective, the Secretary General’s report plays the politics well. It is full of praise for the work of the OWG. However, in addition,

I read that as taking back the stick.

Some new angles and priorities

From Paragraph 60 onwards, and through to the end at para 161, we are on the SG’s turf. He says that the post-2015 agenda should include a ‘compelling and principled narrative’, building on current commitments with ‘concrete goals, together with measurable and achievable targets’. The agenda should be adjusted to the capacities of countries and ‘will require serious commitments for financing and other means of implementation’.

In practice, this may mean sticking to the 17 goals suggested by the OWG, but there is no specific proposal to that effect. Instead, para 63 says that the OWG report should be the ‘main basis for the Post-2015 inter-governmental process’ (NB the process, not the final post-2015 framework). The SG then proposes an ‘integrated set of six elements’. These are in Figure 1: eradicate poverty and fight inequality; ensure healthy lives, knowledge and inclusion of women and children; protect ecosystems; grow a strong, inclusive and transformatory economy; promote safe and peaceful societies; and catalyse global solidarity for sustainable development. ‘Responding to all goals as a cohesive and integrated whole’, the report says, ‘will be critical to ensuring the transformation needed at scale’ (Para 82). The goals also apply to all countries. 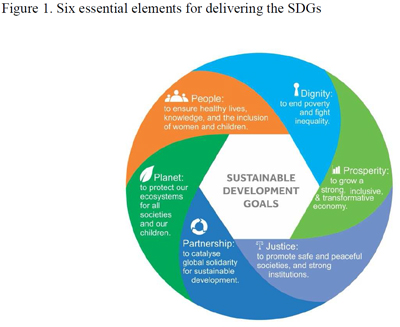 Having offered a framework, the SG turns to means of implementation, meaning finance and other instruments. The analysis is rooted in the work of the Intergovernmental Committee of Experts on Sustainable Development Finance (whose report I reviewed here) – but there are also some important new challenges. These are some of my favourites:

There are sections of the report which deal with technology, measurement of goals and targets, monitoring and evaluation, and data. I will leave others to comment on those, but confess to experiencing a guilty pleasure reading Morten Jerven’s broadsides on the cost and limitations of the so-called data revolution: see, for example, here and here. I expect there will be rejoinders!

Finally, there is an important section of the report which deals with ‘making the UN fit for transformation’ (paras 151 ff): ‘member states must be more coherent in their support, in particular as it relates to governance and funding of the UN system’. Quite right.

Options for the future work programme

Put all this together, and it means that ‘our work is a sobering and inspiring challenge’ – not presumably, just to accept the OWG Report, but to build on it.

There will be plenty of opportunities to do just that. The major summits of 2015 include Sendai on disaster risk reduction (March), Addis Ababa on financing for development (July), New York on the SDGs (September) and Paris on climate (December). In addition, however, the two ‘co-facilitators’ of the post-2015 negotiations, David Donoghue, Permanent Representative of Ireland, and Macharia Kamau, Permanent Representative of Kenya, have proposed no fewer than ten negotiating sessions of 4.5 days each between January and July. That is some construction project!

In the spirit of constructive, well, construction, I have a few comments to offer on the SG Report:

First, it is really good to have shown leadership in this document. The SG has a good team working on post-2015, led by Amina Mohammed. I hope all stakeholders will recognise that the SG report is an advance. There are some really important elements in the SG Report, including (to my mind, others will have their own list) the mainstreaming of climate change action and finance.

Second, the co-facilitators have developed a sensible outline for the final outcome document, summarised as follows:

‘It is envisaged that the outcome document to be prepared for adoption at the Summit in September 2015 would contain the following main components:

A further element proposed by some Member States - though this will require further discussion - is the possible implications of the post-2015 agenda for the UN system and its institutions ("UN Fit for Purpose").’

Third, I could have wished for more detailed references in the SG’s Report to the ‘fundamental values’ of the Millennium Declaration. To recall, they read as follows:

‘We consider certain fundamental values to be essential to international relations in the twenty-first century. These include:

Freedom.Men and women have the right to live their lives and raise their children in dignity, free from hunger and from the fear of violence, oppression or injustice. Democratic and participatory governance based on the will of the people best assures these rights.

Equality.No individual and no nation must be denied the opportunity to benefit from development. The equal rights and opportunities of women and men must be assured.

Solidarity.Global challenges must be managed in a way that distributes the costs and burdens fairly in accordance with basic principles of equity and social justice. Those who suffer or who benefit least deserve help from those who benefit most.

Tolerance.Human beings must respect one other, in all their diversity of belief, culture and language. Differences within and between societies should be neither feared nor repressed, but cherished as a precious asset of humanity. A culture of peace and dialogue among all civilizations should be actively promoted.’

Respect for nature.Prudence must be shown in the management of all living species and natural resources, in accordance with the precepts of sustainable development. Only in this way can the immeasurable riches provided to us by nature be preserved and passed on to our descendants. The current unsustainable patterns of production and consumption must be changed in the interest of our future welfare and that of our descendants.

Shared responsibility.Responsibility for managing worldwide economic and social development, as well as threats to international peace and security, must be shared among the nations of the world and should be exercised multilaterally. As the most universal and most representative organization in the world, the United Nations must play the central role.’

Perhaps they are all reflected in one way or another in the SG Report.

Fourth, it is definitely good to have fewer high-level goals, though personally I would have managed them slightly differently – as I suggested in my review of the OWG Report. A key issue is the need to separate ends and means, and to my mind a strong economy is a means to an end rather than an end in itself. I also think lumping health and ‘knowledge’ (=education) together is unhelpful. Take out the economy, separate education and health, and we would still have six goals, including ‘partnership’ (itself debateable, actually). Remember that in my review I added in nutrition, an important and topical preoccupation, as evidenced by the publication of the Global Nutrition Report. This could, however, be subsumed in a more general goal of well-being. Anyway, I concluded as follows:

‘I can perfectly well accept that the elimination of poverty, hunger, ill-health, and ignorance are intrinsic components of human development, and that full and fair citizenship for all, as well as a sustainable environment, should be at the same level. However, it seems to me that growth, industrialisation, energy, infrastructure, cities, trade regimes and finance are means to the overall goals, not ends in their own right.

It follows that the OWG has made the post-2015 framework far too complicated and difficult. Major simplification should be possible, and this would make communication far easier. In the previous paragraph I have the goals down to six. Sorted. And if anyone wants to add, they should explain why the item is an intrinsic good in its own right, rather than a contributing factor.’

Fifth, notwithstanding the above, I thought risk and resilience were somewhat underplayed in the Report: only four references to risk, for example, and only two of those linked to disasters; just three references to resilience; and no reference at all to ISDR or to the Sendai conference on disaster risk reduction.

Finally, but I realise this will be difficult, a slash and burn exercise is needed on the 17 goals and 69 targets. There are all sorts of reasons for this. To name just a few: simplicity and communicability; logical sequencing; cost of measurement; and priority-setting. A good start will be to eliminate repetition and overlap in the OWG text, and insist on rigorous logical hierarchies: that would eliminate probably a third of the overload at a stroke. Beyond that, perhaps there needs to be a systematic technical review with unambiguous terms of reference: to cut the secondary goals and targets to the minimum without losing content. There will be special need for portmanteau indicators: nutrition status might come back in here.

It is still a concern that the final outcome document will be aspirational in tone, even florid, but ultimately vapid: the SG’s report displays a disconcerting predilection for resonant but somewhat unsatisfying exhortation. The SG’s team and the two co-facilitators need to be really careful with the language.

On the other hand, the SG’s report is definitely a step towards common sense and useability. I’ve got a good idea. Why don’t we send Amina Mohammed away on a quiet retreat and just let her get on with it. A long weekend should do it.