Development Cooperation Report 2014: Forwards or sideways on Financing for Development?

I was glad to moderate the launch of the OECD/DAC’s magisterial Development Cooperation Report in Paris on 7 October. You can watch a video of the event here. Given that the Report of the Inter-Governmental Committee on Sustainable Development Financing was published only a few weeks ago (see here for my review), one key question I asked the audience and panellists to discuss was whether DCR 2014 takes us forward or sideways on Financing for Development. My answer? Forwards, I think, especially on ‘smart aid’. However, I still think (as per my ICESDF review) that we need more work on country-level needs and absorptive capacity. Perhaps the next phase of ODIOverseas Development Institute (London) research on development finance and the Age of Choice will provide that perspective. Annalisa Prizon is in charge. I am also looking forward to the European Development Report on Financing, led by Dirk Willem te Velde.

DCR 2014 is a serious piece of work. There are 21 chapters, written by over 40 named authors, some of them OECDOrganisation for Economic Cooperation and Development staff members, some not. There are also 14 short essays, by ministers and other luminaries. Immediately, we see that this is not an official statement by the Secretariat of the DAC, far less by its members. Rather, we have a compendium of analyses, views and suggestions, some of which may eventually carry through to policy, but some of which may not. The qualification matters, because there are some radical suggestions tucked away in the text, as we shall see.

That there is coherence to the document owes a great deal to Hildegard Lingnau and her collaborators in the DAC, notably Julia Sattelberger. They, I’m sure, would want to acknowledge Jon Lomoy, who runs the Development Cooperation Directorate of the OECD, and Erik Solheim, who chairs the DAC. The latter makes a characteristically feisty contribution, reminding us that this is a political discussion, not a technical one. As an example, here is the opening paragraph of his editorial:

‘There is plenty of money in the world that could be used for development. Just stopping the enormous sums illegally flowing out of developing countries could provide billions of dollars for poverty reduction. Redirecting fossil fuel subsidies to renewable sources of energy would reduce the pace of climate change and more than double investments in green energy. Every child would be enrolled in school and teachers celebrated as heroes if peace entrepreneurs were able to mobilise as much money as war entrepreneurs. Money can be allocated and used much more effectively if we choose to do so.’

Anyway, it’s worth setting aside a couple of hours to skim the 21 chapters, but my advice is to begin by skipping the Executive Summary and going straight to Chapter 1, which really pulls the argument together. Perhaps pause as you pass on Pg 25 of the Summary, which contains an overview infographic which tells the story (and on the website links to the various chapters). Here it is: 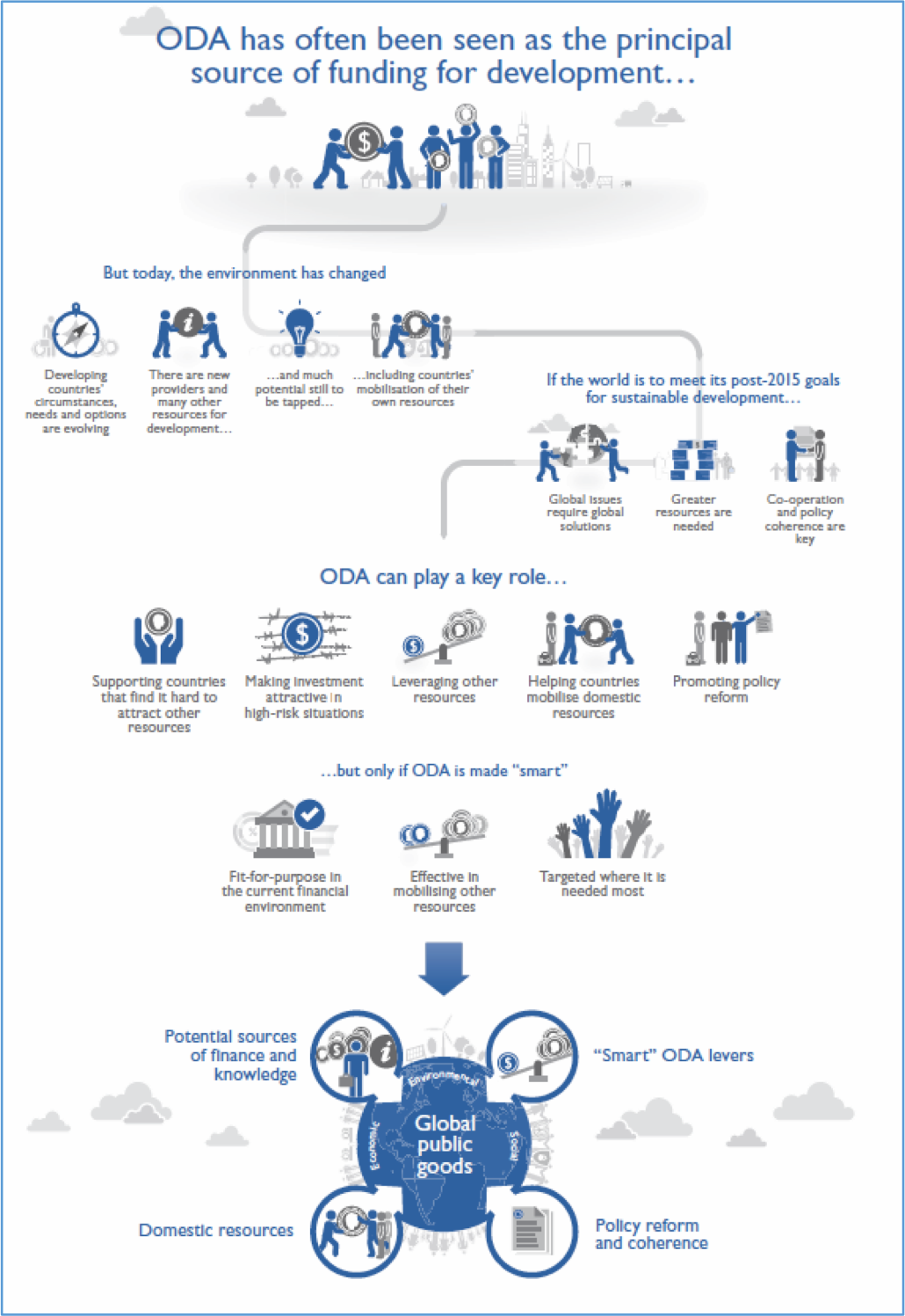 Chapter 1 spells the argument out in words:

Following the stand-alone Chapter 1, the next nine chapters review existing sources of financing for sustainable development. Suzanne Steensen does an especially good job reviewing ODAOverseas Development Assistance flows to different kinds of countries, creating five categories and demonstrating that ODAOverseas Development Assistance plays an especially important role (over 60% of external flows) in least developed countries. There is a good summary in Figure 2.3 (Pg 43), reproduced below. Steensen notes, however, that ‘ODA growth is slowing in those countries which need it most’ (Pg 46). The ‘new’ or growing business seems to be loans to Middle Income Countries.

Other chapters in this section deal with South-South cooperation, foreign direct investment, taxation, remittances, and, usefully, NGOs and Foundations. There are informative chapters on boom and bust cycles in FDI, and on the role of pension funds, sovereign wealth funds and other institutional investors. It is salutary to be reminded (Pg 104) that it is a myth that Foundations have the same priorities as the development community. 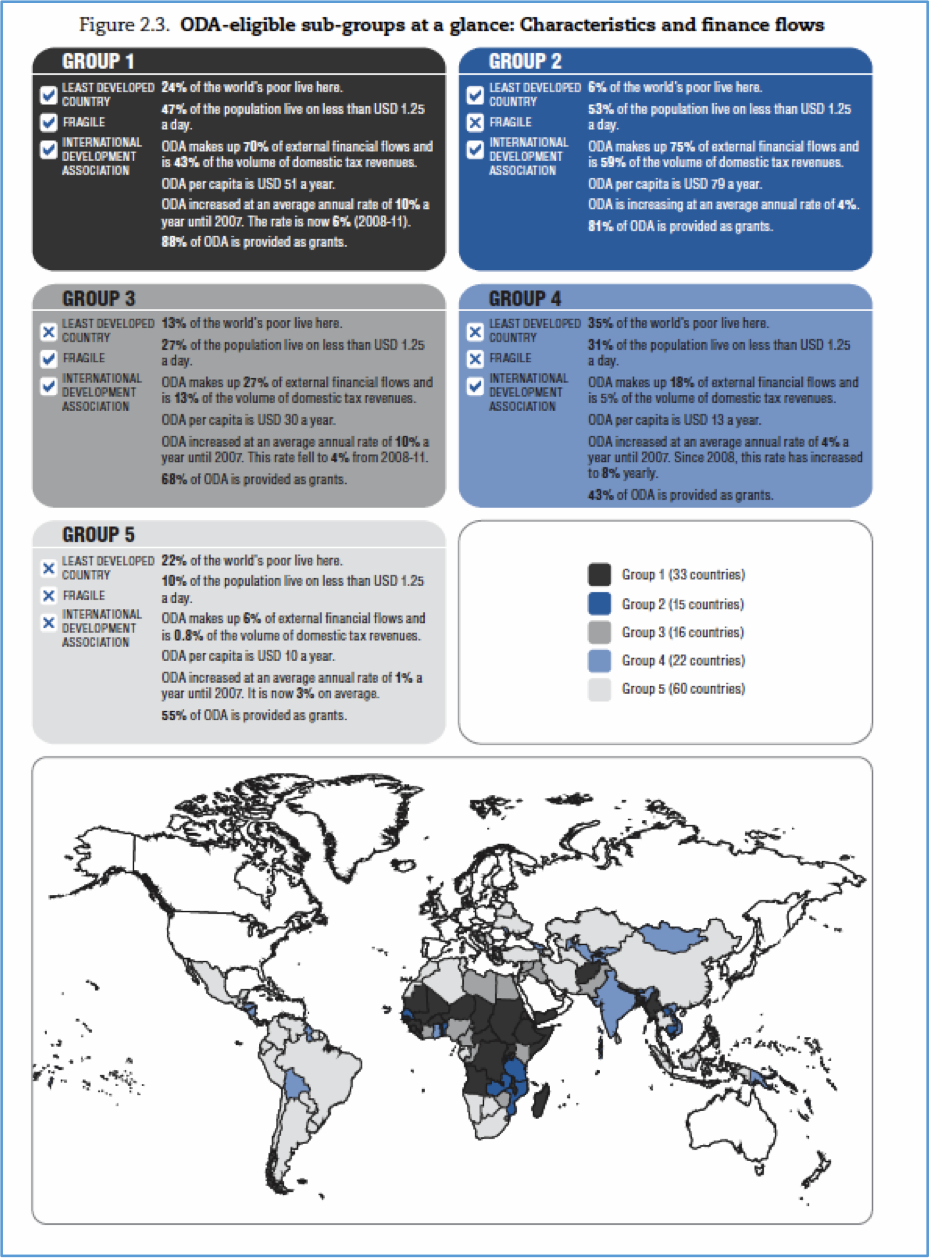 The next six chapters deal with mechanisms for increasing resources for sustainable development: regulatory regimes, tax collection, the control of illicit financial flows, and social business are all covered, along with innovative finance, and measures to leverage private sector investment.

Finally, five chapters deal with development finance post-2015 and the provision of global public goods. There is material here on climate change, peace and security, aid for trade and fragile states, among other topics. For example, Jan Corfee-Morlot and Stephanie Ockenden unpack green finance, with an analysis of the Rio markers, as in the diagram below:

This is a 250-page report (plus 150 pages of annexes), so I am not going to try to summarise everything, but there are some excellent killer facts, useful for your next PowerPoint (well, anyway, mine). For example:

There are also many practical suggestions and some radical proposals, including these:

Now, I said at the beginning that the report was ‘magisterial’. I looked up the meaning to be sure, and magisterial is defined as ‘having or showing great authority’. That sums it up. This report is really an invaluable compendium and summary of the debate.

As to the exam question of whether this takes us forward or sideways, well, let’s be honest, the overall narrative is becoming familiar. I won’t repeat the summary of the ICESDF (but see my review for the framework, the nine overarching principles, and the 29 main recommendations, as well as links back to previous work on the topic by others. There is obviously a good deal of common ground. As I observed:

‘All these documents emphasise the importance of country leadership and of domestic revenue. They all acknowledge that different countries have different needs. They all emphasise the role of the private sector. They all call for international finance to be greater in scale and better-managed. They all recognise the need for better regulation, including with regard to taxation. And finally, they all recognise the need for investment in global public goods.’

There are also unanswered questions. These are the ones I identified in my review of ICESDF, and they remain unanswered, I think:

Where the DACDevelopment Assistance Committee (of the OECD) is especially strong, however, and does take us forwards, is in the area you would expect, viz. the role of concessional finance. This is the bottom half of the infographic, where the report argues:

There are chapters dealing with most of these points, but let me pick out one in particular, by Mariana Mirabile, Cecile Sangare and Claudia Schmerler, which deal with pooling mechanisms, guarantee schemes and equity and mezzanine finance. These options are much discussed in the world of financing for development, and often not well understood. This chapter provides helpful explanations and a useful summary of experience. There are also two individual essays, by. Pierre Jacquet and Owen Barder. The former observes (Pg 140) that ‘risk mitigation is at the core of a modernised, reinvented role for ODA.’

As this discussion moves from the realm of policy debate to policy action, it will be important to link it to DACDevelopment Assistance Committee (of the OECD) work on the definition of ODA. This is highly relevant to the way in which loans are treated, to climate finance, to funding of peace and security, and to important questions about who is eligible for concessional finance and who is not. All this was being discussed as I sat waiting for the launch event to begin, and indeed was so exciting for DACDevelopment Assistance Committee (of the OECD) members that we had to delay the start of our event. It is not for me to reveal the content of privileged discussions at OECDOrganisation for Economic Cooperation and Development headquarters, but my strong advice is to read Box 1.2 of the Development Cooperation Report (Pgs 32-3), and then keep a watching brief on the High Level (=ministerial) Meeting that will take place on 15-16 December.

Note: There’s obviously been plenty of commentary on this report. I recommend:

# RE: Development Cooperation Report 2014: Forwards or sideways on Financing for Development? — Tesfaye 2014-11-30 15:13
Hi Simon. As always an excellent report. I'll not hang on explaining how good the report is for it shows it is already. However, my concern is of what is missing out of this report i.e. 'how to' guide the ODA flow to constructive means - the possible mechanisms have not been briefed. It could be theoretical or highlighting best practices. I can call it a rainbow approach as there will be no one solution that can fix it all. How about attaching a climate tag for all oda's being directed to these countries as that is a practical sustainable solution or other methods... You're good at this, I'm sure you can come up with tones of ideas. I've not read the report so what ever I'm throwing here could be wild, but I've read your recent post and it's spot on. Unless there are parallel mechanisms, the INDCs and the SDGs i think will yield not the result expected. This report conclusively highlights ODA flows and it's quantity...Lots of facts have been unfolded here. So the onus is now that we know the facts, what happens next or what's the best way forward from this data?
Cheers,
Reply | Reply with quote | Quote
Refresh comments list