The SDGs: a transformatory challenge for NGOs

The new SDG Framework – or the global goals as we are encouraged to call them – provide both an opportunity and a challenge for NGOs. Of course, there will be lots of pet topics represented, and every NGONon-governmental organisation will find a hook on which to hang its pitch to the public and to donors. One problem is that there may be too many hooks, encouraging individual NGOs to spread themselves too thinly. More interestingly, though, the new Global Goals challenge NGOs to think in an integrated way about the goals as a whole. Perhaps an entirely new approach will be needed?

I had this dilemma in mind as I travelled to Cologne to speak to the marketing and communications specialists of the global Fairtrade movement. This movement brings together three producer networks, 25 Fairtrade organizations, Fairtrade International, and FLOCERT, the independent certification body of the global Fairtrade system. It has been astonishingly successful in creating links between producers and consumers: 1.5 million farmers and workers, generating nearly 950 million euros in producer revenue from sales, and an additional 95 million euros in premium paid to producer organisations, to invest in economic or social infrastructure. In the UK alone, retail sales of Fairtrade certified products in 2014 amounted to £1.74 bn, and the premium paid to £25m.

The global goals are famously wide-ranging and comprehensive (Figure 1). The fair trade movement does not need any lessons from me on how to engage with the individual goals. On 14 October, just a couple of weeks after the SDG Summit in New York, they published a report entitled ‘Sustainable Development Goals and Fairtrade: the case for partnership’. This identified the key action points for Fairtrade as in Figure 2, identifying 7 entry points of special interest to small farmers and workers around the world. 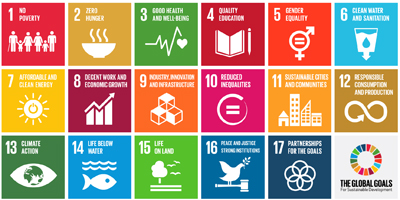 Entry points for fair trade in the new global goals. 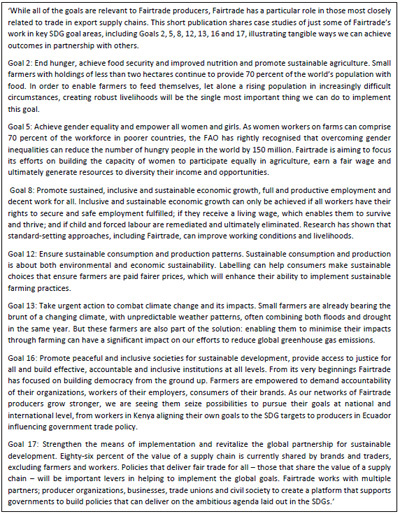 What, then could I add? I decided to make three points.

First, the context for fair trade is complicated. There are significant commercial pressures in most consumer markets, pushing down consumer prices and making premium payments less easy to secure. The commodity ‘super-cycle’ has come to an end, with a negative impact on the international price of some core fair trade commodities. Sugar cane from ACPAfrica, Caribbean and Pacific origins presents particular problems because of changes to the EUEuropean Union trade regime, but also because of increased focus on the role of sugar in causing the epidemic of obesity. At the same time, the development context is changing, with tight aid budgets more narrowly focused on fragile states and humanitarian problems (including, in Europe, spending on refugees). Public opinion remains quite variable, with strong support for development in some countries, but less in others, and with support for the idea of paying more for fair trade products also variable. In Europe, for example, as Figure 3 shows, Eurobarometer surveys show that support for fair trade is concentrated in the north-west part of the EU. 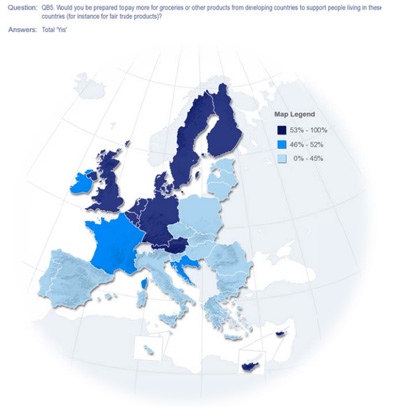 On the more positive side, aid donors have a renewed interest in growth, in trade, and in aid for trade. The new EU trade strategy, published on 14 October, is an example. It talks specifically about fair and ethical trade, saying that

‘Policymaking needs to be transparent and the debate needs to be based on facts. Policymaking must respond to people’s concerns with regard to the EU’s social model. The Commission must pursue a policy that benefits society as a whole and promotes European and universal standards and values alongside core economic interests, putting a greater emphasis on sustainable development, human rights, tax evasion, consumer protection, and responsible and fair trade.’

Specifically, the EUEuropean Union Commission promises action as in Figure 4.

The SDGs also provide a positive context, but, and this is my second point, they also pose a serious challenge. This is because they put environmental sustainability on a pillar alongside poverty reduction, and imply a major shift in the way the world economy is structured. There will be many drivers of change, but I focused on climate change as the key example. To cut a long story short, complete decarbonisation of the world economy will be required well before the end of the century, with radical action starting immediately. This will impact production systems, trade patterns and prices, and consumption. Will the African flower industry survive, for example, if airline fuel has to bear a carbon tax? Can commercial production of crops for export survive if petro-chemical based fertiliser ceases to be available? And how will consumption patterns change if consumers become ever more conscious of food miles, and decide to buy local? The changes could all impact severely on fair trade producers – and sooner than might be expected.

At the same time, climate change will impact on producers, even if temperature rise can be held to the international target of 2 degrees. Extreme weather events, including droughts, floods and storm damage will become more frequent and more severe – the current El Nino event is just one harbinger of the future. And long-term, there will be severe impacts on production. I showed the maps in Figure 5, illustrating the areas where coffee can be grown in Uganda today, and where it will be possible if temperature rises 2 degrees. The decline in area is genuinely shocking. In general, around the world, the impact of climate change is to push areas suitable for coffee to higher alititudes, up to 400m in many cases – and of course many countries do not have sufficient land at higher altitudes for the industry to survive. A similar story can be told for tea.

Areas suitable for coffee production in Uganda, today and with a rise in temperature of 2 degrees. 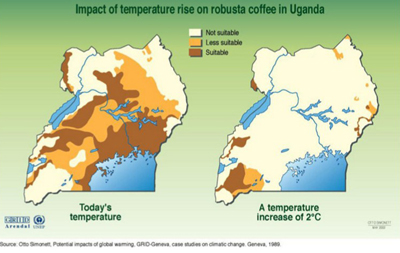 Thus, the global goals bring to the foreground an issue that would anyway become evident even if the goals had not been formulated in the way they have – namely that it will not be enough just to carry on with business as usual. Transformation will be required, with large scale and often unanticipated adjustments required.

The third point, then, is that there are options for fair trade organisations, as there are for other NGOs. I suggested that there might be three of these:

First, to carry on helping poor farmers to escape poverty, with a strong focus on improved productivity and on social organisation, also including gender issues, as in the current model;

Second, to range more widely across the new global goals, perhaps including more work on different aspects of the supply chain, and picking up some key goal areas like democracy and participation.

Third, to place the organisation in the vanguard of global transformation, really focusing on being a partner of choice to all stakeholders as they manage the transformation.

The first two options are consistent with fair trade’s mission and current experience. They are reflected in Fairtrade’s  own work on the SDGs. The third option is more radical. It would, for example, imply mainstreaming mitigation and adaptation in every single stage of the movement’s project cycle, designing new programmes and mobilising new resources.

It is not for me to write Fairtrade’s strategy. In any case, I am told they already have a new strategy, just approved. Some interesting points came up in Cologne, however, as we discussed the options There was recognition that there were genuine choices to be made, about how to spend resources, and how to work with partners, including in the private sector. There was concern that the agenda should not be overloaded; some thought that global transformation should be thought of as a long term goal, with current and planned models the basis for immediate action. Someone suggested that there were interesting links to make with sustainability movements in developed countries, linking fair trade town movements to transition town campaigns. Finally, someone suggested that business partners in fair trade would probably be looking for a one-stop shop to help implement the SDGs, and that Fairtrade organisations should be able to offer comprehensive coverage. One interesting current initiative: we were told that a company in the Netherlands is marketing climate-friendly Fairtrade coffee. And Fairtrade International has just published a new climate standard, to be launched formally during the climate talks in Paris.

I’m sure these debates will be running in many NGOs as they contemplate how to use the SDG framework. As a former trustee of the UK Fairtrade Foundation, it was a pleasure to see the fair trade movement engaging so actively and so early with the new agenda.