UNEP’s annual Emissions Gap Report, just published, contains some very important analysis about how the world is getting on with the tough job of reducing carbon pollution. It also contains the material needed to construct a narrative for Paris and beyond. The latter is potentially controversial, so let’s begin with the facts. There are six key take-aways.

First, total emissions are still rising, and will continue to do so. UNEPUnited Nations Environment Programme estimate that total Greenhouse gas emissions in 2014 amounted to 53 Gt; by 2030, they estimate that the figure on current trajectories will have risen to 60 Gt.

Second, there is quite a bit of back-sliding on pledges countries made to reduce emissions by 2020, even though some were not especially ambitious. An analysis of performance by G20 countries shows that at least 4 have more work to do if they are to fulfil their promises. Overall, the G20 will come close to meeting its target, mainly because of over-achievement by China.

Third, country pledges for Paris, INDCs, have made a contribution, but only a partial one, to the further reductions needed by 2030. Over 155 countries have submitted pledges, some unconditional, and some conditional, dependent on finance or technical support. UNEPUnited Nations Environment Programme show that likely emissions on the current trajectory before INDCs amounted to about 60Gt in 2030, and that the level needed to keep the world on a least-cost path to 2 degrees is 42Gt in 2030. If all unconditional INDCs are implemented, the expected level of emissions in 2030 is 56 Gt; the figure might be 54 Gt if conditional INDCs are fully implemented. That means INDCs have ‘filled’ 22-33% of the gap that existed before the process began. See Figure 1. 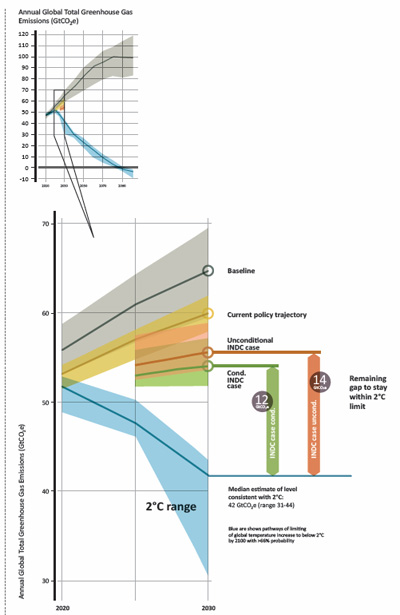 Fourth, the temperature rise implied by the conditional and unconditional INDCs submitted is that there is a two thirds chance of warming being held to 3 – 3.5 degrees. If only unconditional pledges are considered, the figure could be as high as 4 degrees.

Fifth, there is a large amount of action being generated by various non-state actors, including cities, groupings representing sectors like cement, and private sector companies. These may, but may not, reduce emissions further: it is not clear how far such initiatives have already been factored into national INDCs. For the period to 2020, a degree of additionality is expected over and above current pledges, perhaps as much as 70 per cent. This could contribute up to a further 2 GT of emissions reduction in that year. No analysis is available yet for the period after 2020.

Sixth, there is potential for further reductions, for example in energy efficiency, renewable energy and forestry. The technical potential is available to fill the emissions gap.

These six take-aways are broadly consistent with other analysis, including that by Carbon Action Tracker and by the UNFCCC. The main difference has to do with the temperature implication, where others have cited 2.7 degrees rather than 3 degrees or higher. This, however, is mainly a statistical artefact. The lower figure is associated with a lower probability of success (50 percent) and the higher figure with a higher probability (66 per cent). UNEPUnited Nations Environment Programme follows the IPCC in using the higher standard.

We now need to enter the world of interpretation. There are both pessimistic and optimistic perspectives.

A pessimistic take on the figures would be to say that the INDCs, for all the attention paid to them, have simply failed to deliver pledges on the scale required. Up to 75% of the work still has to be done, even if countries fulfil their pledges - and time is running out. Every year in which the world as a whole deviates from the least-cost pathway raises the cost, increases the risk, and cuts the number of years until the carbon budget runs out. Not all countries have failed, of course. Some have qualified as the ‘poster children’ of the moment: Bhutan, Costa Rica and Ethiopia are often mentioned. Others, however, have done too little: the CAT league table has 13 countries rated as ‘inadequate’ among those it assessed, including Australia, Canada and Japan, as well as several emerging economies.

A more optimistic take on the figures would be to say that the level of international cooperation represented by INDCs covering 155 countries is unprecedented, and that significant reductions will follow. Yes, there is still a lot to do, but many countries will have pledged conservatively, so with luck will exceed their commitments. Further, the contribution of non-state actors may prove to be greater and more ‘additional’ than presently thought. There are many technological and policy options in the toolbox or in the pipeline, so if Paris agrees a regular and early review process, as now seems likely, then there is still time to bend the curve further towards 42Gt in 2030.

It should not be surprising that official spokespeople tend to the optimistic view – see, for example, comments by Christiana Figueres and Achim Steiner. They genuinely feel that their efforts in building partnerships and brokering deals have not gone unrewarded. They are optimistic about the potential of the review process. Further, they think, probably rightly, that success in Paris depends on maintaining unity of purpose and a sense of shared achievement. There will be enough pitfalls to deal with around issues of finance and Loss and Damage, to name but two, without throwing the talks into disarray over the level of INDC commitments.

Personally, I have found it hard to formulate a position. It is hard to read the UNEPUnited Nations Environment Programme findings without thinking that someone should call for – even better, deliver - more effort and additional commitments in Paris. Couldn’t someone pull a rabbit out of the hat? It is also very tempting to start looking for scapegoats at the tail end of the CAT list. I have spent some time looking for material on what a 3 degree world would actually look like, and wondering how plausible it is in the real world to roll out the various technical and policy options people say are waiting to be drawn upon.

Finally, though, I think all those are questions for the day after Paris ends. Let’s celebrate what we have, bank the Paris agreement before anyone changes their mind, and then move forward - fast.

(Declaration of Interest: I am on the Steering Committee)