How to avoid the winner’s curse: lessons for a new nutrition policy

Nutritionists must think they have won the lottery. A high profile in the post-2015 framework. Money flowing in, from Governments, philanthropists and the private sector. Even, nutrition indicators around the world improving.

None of this has happened by accident, so not a lottery win in that sense. I’ve written before about the politics of putting nutrition on the agenda, including efforts by Lawrence Haddad, which resonated at the highest level. As the advertising slogan has it, ‘you have to be in it to win it’.

Still, it looks as though the good times are rolling for the nutrition community. That is unequivocal good news, but also raises potential problems. After all, we know that lottery wins often end badly – in penury, depression, sometimes suicide. What are the pitfalls, and how can they be avoided?

There are, I suggest, four main pitfalls, and four ways to avoid the risks.

How can the risks be avoided?

2. What are the pitfalls?

Going on a bender

The first pitfall lottery winners face is the temptation to ‘go on a bender’: to revel in the win and waste the money without thought for the wise investment or the longer-term. ‘Spend, spend, spend’ as one famous winner (Viv Nicholson) defined her philosophy in 1961. Or, to quote the Northern Ireland footballer, George Best, ‘I blew hundreds of thousands of pounds on wine, women and song – the rest I just squandered’.

Nutritionists may face that temptation in a slightly different form: allowing the bureaucracy to mushroom; responding to inappropriate political imperatives; over-funding programmes without proper planning or evaluation; scaling up too quickly; wasting too much time at high-profile meetings in London, New York or Davos.

The second pitfall, well-known to lottery winners, is the proliferation of financial advisers who arrive on the doorstep the day after the win. Some are honest. Some are well-informed. Some are both honest and well-informed. Some, however, will be unscrupulous, charging high margins, recommending unsound investments, sometimes even running away with the cash. It is really hard for the new lottery winner to know who to trust.

Nutritionists who win the lottery of funding face the same problem of a surfeit of advice. Rather than financial advisers, the people knocking on the door in their case will be donor agencies, NGOs, and even universities and think-tanks. Just as financial advisers vie for attention, so too do outside and domestic experts. Many will want to be chosen to provide technical assistance, to help write the national plan, to be the agency of choice for implementation. But how to choose? And how to avoid being misled?

Being seduced by the snake-oil salesmen

Lottery winners find another group of people knocking on the door: those who offer ingenious solutions to problems. You have a bad back? I have just the (expensive) treatment you need. Worried about your children’s education? Let me tell you about a wonderful private school I know. The neighbours no longer to your taste? Come and see this housing development I can recommend.

There is no shortage of technical solutions on offer to the newly-empowered, newly prosperous nutritionist: new crops perhaps, new supplements, new vaccinations, new forms of therapy, new approaches to community development. Some will be evidence-based and appropriate to the local circumstances. But all? And how to discriminate between the snake-oil salesmen and the genuine purveyors of essential innovation?

Being overwhelmed by impecunious relatives

A fourth pitfall facing lottery winners is the impecunious relative – or perhaps not quite impecunious, just relatively less rich than the winner. The letters and calls pour in, from family near and far, and often from complete strangers too. Most lottery winners want to help and some are extraordinarily and injudiciously generous. Some bankrupt themselves in the process.

In developing countries, there will be no shortage of impecunious relatives, casting jealous eyes on the upgraded offices, the new cars, the state of the art computers, the invitations to travel, that all go with winning the development funding lottery. Some may be very close at hand – perhaps in other parts of the Ministry of Health, starved of funds as the aid money is targeted at special purpose vehicles to support nutrition and other fashionable causes. Others may be somewhat further away, in other Ministries linked to food, like agriculture or commerce, or even in central units under the auspices of the Prime Minister or Vice-President. Beware the grasping hands of the disaffected!

None of these is a trivial risk. Many lottery winners prosper, of course, living into old age, surrounded by grateful family members and other beneficiaries of their largesse. A surprising number, however, do not. How can the risks be avoided?

3. How can the risks be avoided?

Obviously, the way to avoid the risks of winning the lottery is to follow the opposite road to those who fail: try to avoid going on a bender, choose the right financial adviser, keep the snake-oil salesmen at bay, and lock the door against impecunious relatives. Easier said than done, but sound advice all the same.

When it comes to nutrition, the lessons can be translated into somewhat more practical options. There are three or four worth considering.

First, nutritionists would do well to remember, in fact to paste onto their wall, the principles of aid effectiveness, originally adopted at the High level Forum on Aid Effectiveness in Paris in 2005, and further refined at subsequent meetings in Accra, Busan, and Cancun. There are five basic principles: ownership, alignment, harmonisation, a focus on results, and mutual accountability.  Ownership is the fundamental principle for nutritionists to hold onto, a vital bulwark against the financial advisers, the snake oil salesmen and the impecunious relatives. It is described by the OECD/DAC as in Figure 1. Nutritionists should never forget who is the boss.

A second lesson is that nutritionists need knowledge and skills that stretch beyond the boundaries of nutrition science and programme design, also to understand how organisations work and how policy is formed. It is tempting to recommend Machiavelli’s The Prince, or Sun Tzu’s The Art of War, but there are many more modern books on how to make things happen within organisations, how to understand policy processes, and how to be a policy entrepreneur.

Rebecca Sutton has written a useful guide to the policy process, and ODI’s programme of work on Research and Policy in Development (RAPID) has many resources. Merilee Grindle from Harvard is another very good source of thinking on policy and policy implementation: see, for example, this powerpoint on political analysis of policy reform initiatives. The World Bank has a source book on political, social and institutional analysis of policy reform.

Charles Handy’s book, Understanding Organisations, is a valuable guide to organisational culture and the dynamics of power. ‘Anyone’, he says, ‘contemplating, or involved in, a process of influence needs to reflect upon his source of power, and thence the range of methods of influence that it suggests’. Power can derive from someone’s charisma (their personal power) or physical strength, but also from position, or from control of resources. Are nutritionists bigger and more powerful than others? Probably not. Are they more charismatic? Sometimes, no doubt. But more likely, they will depend on careful analysis of who supports and who opposes their programmes, on building alliances, and on deployment of the right resources at the right time.

When I worked on food security, I developed the fictional story of Frederick and Judith: Judith the nutritionist and head of the food security unit, Frederick a rival at the Ministry of Commerce. We based a whole week of an intensive course on the organisational issues embedded in the case. I’ve posted a scan here.

Do the themes which underpin Frederick and Judith’s conflict still hold? Do the strategies and solutions? I think so. Read my chapter on organisational issues in food security planning, including the story of Frederick and Judith, in the book I edited jointly with Steven Devereux. At the end of that chapter, I summarised some of the lessons, as in Figure 2. 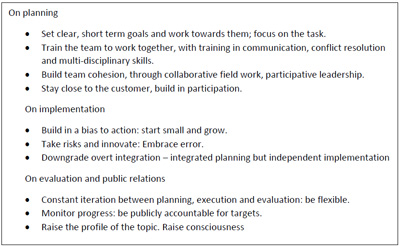 More recently, I have been concerned with How to Win the Argument on Climate Change, touching similar themes on how to tell the story, how to deal with opposing interests, and so on. There is a five point plan:

Make use of global networks

Being a lottery winner can be isolating. Making the case for action on undernutrition and delivering change can also be lonely. It is important to remember, however, that others around the world face similar problems. Friends are invaluable. So are international networks. For some years when I worked on food security, I was a member of the UN Advisory Group on Nutrition. It was inspiring and invigorating to sit with people like Alan Berg, Philip Payne, Nevin Scrimshaw, and George Beaton: great names all. Later, I benefited from extensive networks on food security.

Networks are essential for policy entrepreneurs, but they do not magic themselves into being. Hence, nutrition leaders need to build the social capital they need to sustain themselves. Email, Facebook, Twitter, websites: these turn out not to be the waste of time they are sometimes portrayed to be.

I also think Advisory Groups can be valuable to provide support and sometimes protection during change processes. When well-managed, they play a role akin to that of governing bodies in think-tanks or research institutes: no so much overseeing due diligence in this case, but keeping staff honest to their mission, and also offering a bulwark when resistance is fierce.

Remember what is important

Finally, a key message to nutritionist lottery winners is never to forget the real world challenges that brought them into the field – nor the results than can be achieved with good programming. Some came to nutrition policy from science; others from the experience of working with malnourished children; still others from the fire of food crises and famine. What unites them is a focus on reducing under- (and now also over-) nutrition, to save lives and improve livelihoods.

# RE: How to avoid the winner’s curse: lessons for a new nutrition policy — Desmond Whyms 2015-07-20 11:14
Thanks Simon for such a clear and practical analysis. Sorry to have missed you in Brighton – I did the Transforming Nutrition course last summer, and found it stimulating, useful as well as great fun!

You shine light onto some sensitive areas that rarely get addressed; namely the seemingly inevitable proliferation of initiatives, institutions and global jamborees that accompany increased attention and resources, but risk distracting us from what is really needed: namely accountable and coordinated multi-sector actions and progress at country level.

Very welcome also is your reiteration of our need to focus on development good-practice, and particularly the Paris Declaration 5 principles. These are still highly valid and needed, though in recent years attention and rigour have diminished: thelancet.com/.../...)61533-0/abstra ct

Two issues you don't mention, and which I would love to hear your views on are: i) the Scaling Up Nutrition movement, and how this could now build on the excellent foundations it has laid in increased advocacy and commitments, and ii) the potential for a country-led "deliverology" style scorecard approach which could help ensure high-level championing of progress in a few key areas, from each of the relevant sectors.

We know that nutrition needs a complex multi-sectoral response, with health, agriculture, education, WASH, Social transfers etc. all doing their part; but unless key targets can be captured in a simple and focussed scorecard for senior leaders to own and drive, that complexity can result in disengagement and paralysis.

If countries have a respected senior nutrition champion, a well-run coordinating forum, and some simple and practical tools they can use to track progress and accountability from all partners and sectors, we could start to see a significant upshift in nutrition results.
Reply | Reply with quote | Quote
Refresh comments list