On 26 April, KPMG and ODIOverseas Development Institute (London) launched the new Change Readiness Index. The idea of an Index (then called the Capability Index) was introduced at Davos in 2011. It built on ideas I had developed in earlier work for the Commonwealth Secretariat at the Commonwealth Finance Ministers’ meeting in Cyprus in 2009. I was delighted to be part of the partnership between KPMG and ODI, and to launch the index at KPMG’s 2012 International Development Conference in Geneva. ODI’s work was led by Karen Ellis.

Here is may take on what the index is trying to achieve, and what it tells us. There is more information, including a full data set and interactive graphics, on the KPMG website.

Countries succeed or fall in the modern world depending on their ability to ride the wave of domestic and global change. A new index ranks Chile, Taiwan and Malaysia in the top ten among developing countries; but also, controversially, Tunisia, Kazakhstan and Peru. At the other end of the scale, Zimbabwe is an obvious member of the bottom ten; but so, surprisingly, are donor darlings like Ethiopia and Mozambique.

Many factors shape growth: natural resources, human and social capital, and ‘sunk’ investment in infrastructure. The current conventional wisdom points to the quality of institutions as the key determinant, with an emphasis on the business environment, and on the transparency and accountability of political institutions. The World Bank, for example, carries out a country political and institutional analysis (CPIA). The World Economic Forum has developed a global competitiveness index. The Commonwealth Secretariat developed an economic resilience index.

The new index, developed by KPMG with the Overseas Development Institute in London, focuses specifically on the capacity to manage change – on inputs and capacities, not outputs and outcomes. Do leaders have the will and capacity to respond quickly to global shocks, like the food, fuel and financial crises that have beset the world since 2008? Do they consult regularly with business and civil society? Are they ready to seize new trading opportunities created by new technology? It is not hard to imagine countries where the answers to these questions are ‘yes’; and others where the answers are ‘no’.

KPMG and ODIOverseas Development Institute (London) have brought together some 29 indicators, grouped into three categories: social, governance and economic (Figure 1).

Figure 1: the dimensions of capability to manage change 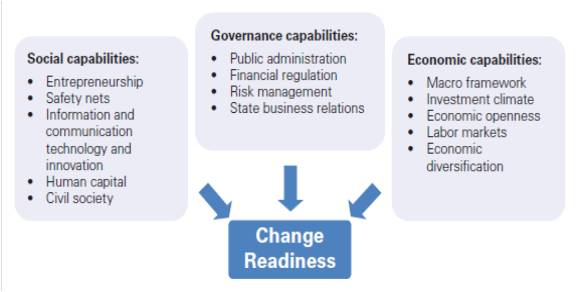 Data has been collected for 60 countries, some from secondary sources and some via expert surveys conducted on the ground. The results are instructive (Figure 2, and see the full results in the appendix). 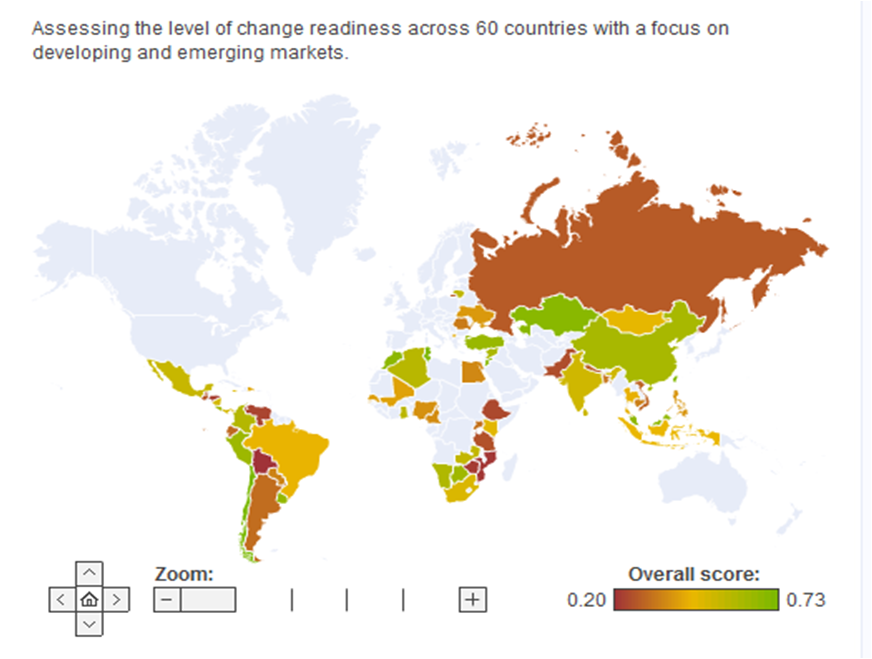 Compare Chile, for example, ranked first, and Brazil, ranked only 31. Chile’s high score is based on its competitive economic policy and sound macroeconomic management; Brazil is held back by poor regulation and higher levels of corruption. Both countries have had successful economies in recent years, but the index sounds a warning: Brazil lags behind Mexico, Colombia and even Peru in its readiness to face the future. It is little consolation that Argentina fares even worse.

Similar stories can be found in other regions. In Asia, Malaysia (ranked 7) out-performs Thailand (32). GDPGross Domestic Product growth in the two countries has been similar, so why is this? The index points particularly to governance and the quality of institutions. In Africa, Ghana out-ranks Zimbabwe for similar reasons.

Change readiness matters to developing countries for two reasons. Development itself is about change: managing the transition from agrarian economies to industrial and then service-based sources of livelihood; dealing with rapid urbanisation; incentivising and facilitating the constant upgrading of firms to protect competitive advantage. In addition, globalisation means that countries are ever more exposed to technical and financial changes which originate elsewhere – whether in the trading rooms of Wall Street or the laboratories of Bangalore. The global crisis in 2008, for example, destroyed over 100,000 textile jobs in Cambodia, and slashed income from flower and horticulture exports in Kenya and Ethiopia, by 35% and 50% respectively. In Kenya, the stock exchange fell by 48% in the year to February 2009.

Changes like these are global in reach and can be long-lasting. Take one example: the fear of climate change is driving a revolution in energy supply which will destroy and create jobs on a global scale. Joseph Schumpeter would recognise the need for countries to recognise the potential for ‘creative destruction’, and take the necessary steps.

Some do. Look at the way China has moved into the renewable sector, partly for domestic reasons, and partly to seize a market opportunity. During the financial crisis, some countries were better prepared and managed better: Bangladesh, Mauritius and Tanzania are all examples, by virtue of greater readiness and better capability.

It is important to be clear that the difference between readiness and unreadiness is not about ideology. The change readiness index rewards macro-economic stability and labour market flexibility, for example, and those can be achieved in both market and non-market systems. I like to think of the index as reflecting the values of the Boy Scouts, where ‘be prepared’ is the motto. It is interesting to note that there are Scout Associations in more than 160 countries world-wide. The young people in those countries are ready. Are their leaders also? 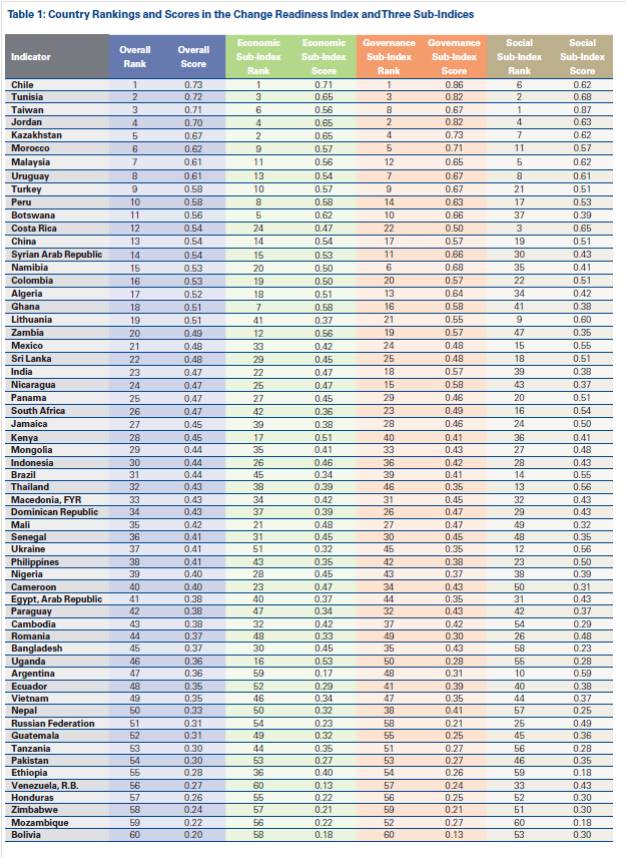 # Can readiness be learned? — Guest 2012-05-13 15:49
I have a hunch this is more important than the aid effectiveness agenda. Can readiness be learned/acquire d? How?
Reply | Reply with quote | Quote
# Omissions — Guest 2012-06-15 06:23
Very interesting. Does the omission of all of the South Caucasus and Central Asian countries (bar Kazakhstan) reflect the lack of reliable data for these countries, or were there active choices made about which countries would be studied and which wouldn't? It is a shame to see so many countries missing!
Reply | Reply with quote | Quote
Refresh comments list