Time to end the tying of EUEuropean Union oda?

The conclusion is that a rather high share of EUEuropean Union aid is tied (at least a third), and that current rules will exclude the UK from significant parts of the EUEuropean Union aid programme. The rules should be changed whether or not the UK were to be part of the EU, but certainly before the UK leaves. This should be on the agenda of the Commission, the Member States, the European Parliament, and on the developing country side, including the ACP.

By way of introduction, remember that the OECD/DAC has a position which disapproves of tied aid. It says on its website that

‘Evidence has shown that "tied" aid - offering aid on the condition that it be used to procure goods or services from the provider of the aid - can increase the costs of a development project by as much as 15 to 30 percent. Untying aid, on the other hand, avoids unnecessary costs and gives the recipient the freedom to procure goods and services from virtually any country.’

Untying aid was a key plank of the Paris Declaration on aid effectiveness, agreed in 2005. An evaluation commissioned by the DACDevelopment Assistance Committee (of the OECD) in 2009 concluded that

‘The overall picture is very positive in terms of progress by DACDevelopment Assistance Committee (of the OECD) donors in the formal untying of their aid, removing legal and regulatory impediments to the procurement of goods and services outside the donor’s own market. The proportion of fully untied bilateral aid rose progressively from 46% in 1999-2001 to 76% in 2007, and for LDCs it has increased from 57% to 86 %. Taking into account multilateral aid, the proportion of untied ODAOverseas Development Assistance has risen to 83% overall. The changes over the past 10 years indicate that the 2001 Recommendation on untying of aid, together with other international agreements such as the Paris Declaration, have had an overall positive impact on further untying aid. But there are important qualifications. Free-standing technical cooperation (TC) and food aid were excluded from the Recommendation and both remain significant ‘grey areas’, with 30% and at least 50% respectively still reported as tied, and the tying status of significant proportions not being reported by some donors.’

The most recent data from the DACDevelopment Assistance Committee (of the OECD) are for bilateral oda only, and show that 20% of bilateral oda was untied in 2015, equivalent to $US 20bn. Equivalent data do not appear to be available for multilateral oda. Six countries report oda as fully untied, including EUEuropean Union Members Denmark, Ireland and the UK. The lowest proportions are in the range 30-50%, including again some EUEuropean Union Members (Austria, Czech Republic, Poland, Slovak Republic and Slovenia, with Greece bottom of the class at 14.5% untied). 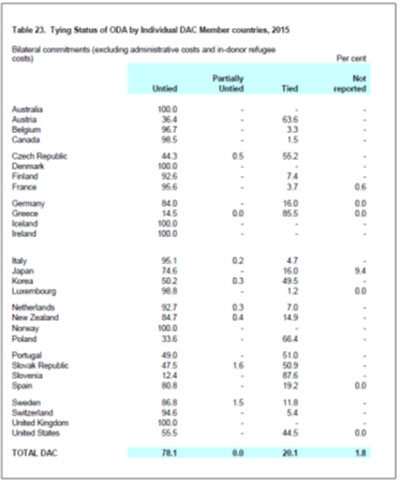 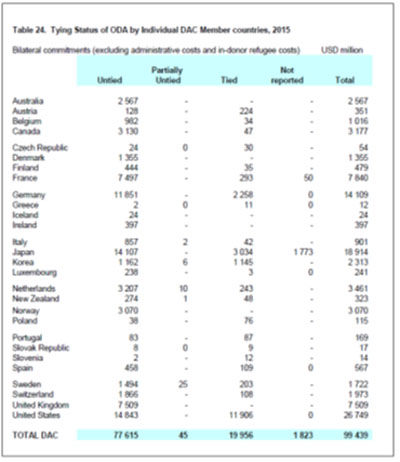 The EUEuropean Union already has too much tied aid

If it is true that the EDF (European Development Fund) and the DCI (Development Cooperation Instrument) are regarded as tied, then it is hard to see how the EUEuropean Union manages to reach 65.6% untied aid. These two instruments alone accounted for over 50% of EUEuropean Union oda in 2015, with other instruments, as we shall see, rather less likely to be untied.

The rules would exclude the UK after Brexit

A more detailed picture of EUEuropean Union tying rules can be gleaned from the EU’s own regulations. The EUEuropean Union website gives ‘rules of nationality and origin’, pasted in for ease of reference at the end of this note, with the following key statement of eligibility:

‘Participation in procedures for the awarding of contracts or grants is open to international organisations and to all natural persons who are nationals of, and legal persons which are effectively established in:

The DACDevelopment Assistance Committee (of the OECD) profile of the EUEuropean Union gives the ten largest recipients of EUEuropean Union oda as in the Table below. None of the top seven would be eligible for UK engagement after Brexit, though the bottom three, Afghanistan, Mali, and DRC would all qualify as LDCs. 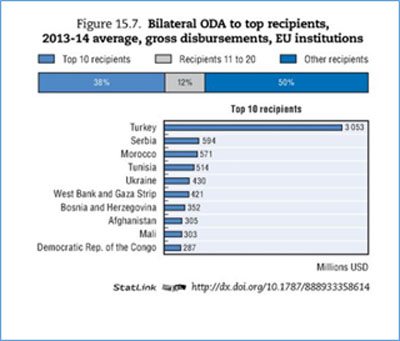 Importantly, the Common Implementation Regulation, from which the above analysis derives, does not apply to humanitarian aid. To access these funds, it is necessary for organisations to sign a Framework Partnership Agreement.  Article 7 of the Humanitarian Regulation says that

‘Non-governmental organizations eligible for Community financing for the implementation of operations under this Regulation must meet the following criteria:

(a) be non-profit-making autonomous organizations in a Member State of the Community under the laws in force in that Member State;

(b) have their main headquarters in a Member State of the Community or in the third countries in receipt of Community aid. This headquarters must be the effective decision-making centre for all operations financed under this Regulation. Exceptionally, the headquarters may be in a third donor country.’

Thus, UK institutions would be excluded, except in exceptional circumstances. One such might be membership of the Council of Europe. Apparently

Finally, with regard to research, the Regulation governing Horizon 2020 specifies that an ‘associated country’ may participate, where an associated country is defined as ‘a third country which is party to an international agreement with the Union, as identified in Article 7 of Regulation (EU) No 1291/2013’. That Article appears to exclude most third countries, except under certain circumstances (see box). 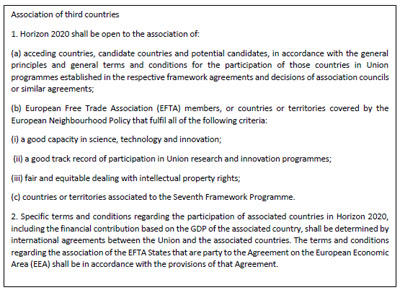 Conclusion: act now to untie EUEuropean Union aid, for the benefit of all

Putting all this together, it does look as though the UK would be excluded from a significant share of EUEuropean Union oda. There might be some special circumstances, and no doubt some UK organisations will establish EUEuropean Union subsidiaries in order to be able to access funding. However, a better option for all concerned, including developing countries, would be for the Regulations to be amended as soon as possible. As noted at the outset, this would benefit all parties, including the EUEuropean Union itself.

2.3.1. The rules on nationality and origin

For each external financial instrument (including EDF), specific rules on nationality and origin may apply. These rules can be found in the following legal acts:

External financial instruments financed from the Budget: As from 15 March 2014, the rules on nationality and origin laid down in the CIR apply to all calls for proposals and tenders launched under these instruments. This includes also award procedures launched after 15 March 2014 under the previous external financial instruments, with the exception of calls for proposals and tenders under IPA I or procedures launched under financing decisions or financing agreements expressly setting out different rules (ie.: other than the standard reference to the basic act). In the latter case, the different rules can be reconstructed by using the previous versions of the PRAG applicable at the time of adopting the financing decisions or of signing the financing agreement.

EDF: As from 20 June 2014, the rules on nationality and origin laid down in Decision No 1/2014 regarding the revision of Annex IV to the Cotonou Agreement apply to all calls for proposals and tenders launched under the EDF.

OCTs: Regarding OCTs, from the entering into force of Decision 2013/755/EU of 25 November 2013, specific rules on nationality and origin apply to grant and procurement procedures.

For each external financing instrument, the countries corresponding to the rules on nationality and origin are listed in Annex A2ato this Practical Guide.

Rules for experts and international organisations:

Likewise, the nationality rule does not apply to international organisations participating in a procurement or grant award procedure.

How to verify compliance with the nationality rules?

For the purpose of verifying compliance with the nationality rules, the tender dossier and the guidelines for applicants require the following from tenderers and applicants:

natural persons must state the country of which they are nationals;

legal persons must state the country in which they are established and provide evidence of such establishment by presenting the documents required under that country's law.

If the contracting authority (or evaluation committee) suspects that a candidate, tenderer or applicant does not comply with the nationality rules, it must ask the candidate/tenderer/applicant to provide evidence demonstrating actual compliance with the applicable rules.

the legal person is formed under the law of an eligible State, and

its real seat is within an eligible State. "Real seat" must be understood as the place where its managing board and central administration are located or its principal place of business.

This is to avoid awarding contracts to firms which have formed “letter box” companies in an eligible country to circumvent the nationality rules.

The decision on whether or not candidates/tenderers/applicants are eligible is taken by the contracting authority (usually on the basis of the information and evidence provided during the evaluation).

Sanctions: When verifying compliance with the nationality rules, careful attention has to be made regarding entities which are nationals of or effectively established in countries against which the EUEuropean Union has adopted restrictive measures9. Notably, a case-by-case analysis of the scope of the restrictive measures is necessary in order to establish their exact impact on eligibility rules in a specific procedure.