Is ICAI getting there?

I know that ICAI is still quite controversial – see for example this Twitter conversation , led by Owen Barder. My view is that they are ‘getting there’: boosted by a triennial review which has sharpened their mandate; overseen in a better-stuctured way by a sub-Committee of the House of Commons International Development Select Committee; and gaining the confidence to make over-arching and analytical comments about DFID. A new Commission is currently being recruited, to take office next year, so we have to hope momentum will be maintained and further improvements made.

This is the third time I have reviewed ICAI’s work. See here and here for previous comments and suggestions. My reviews contribute to the work of the Select Committee, to which I am a Specialist Adviser.

This year’s annual report is well done, comprehensive in its coverage of ICAI’s work (including follow-up on previous years’ reports) and with a useful analytical overview of findings to date. Note that the Select Committee took evidence on the annual report on 8 July, from ICAI and from DFID.

The triennial review of ICAI confirmed its usefulness and made suggestions about the future balance of work, to which ICAI is responding, especially with more thematic reports and relatively fewer project reports).

The timing of ICAI’s Annual report is such that it pre-dates both DFID’s annual evaluation report (see here for the 2013 edition) and the annual Departmental Report (see here for 2013). It would be useful to consider all these together, in terms of coverage as well as lessons learned.

There still remain questions about the relationship between ICAI, the NAO (briefly covered in the Report) and DFID’s own evaluation work (not covered at all).

The ICAI report devotes ten pages to reviewing follow-up from previous years’ reports. In general, it considers that ‘DFID has responded very well to a number of our recommendations’ (Pg 24). However, ‘we remain concerned about how long it took to address some issues. . . (and) we have noticed a lack of consistency in some of the Year Three management responses from DFIDDepartment for International Development . . . We believe that a consistent approach is required: that if DFIDDepartment for International Development accepts that improvements are required and indeed it states that it is already doing some of the necessary work, it should fully accept ICAI’s recommendations and give full management actions’. (Pgs 24-25).

The Report summarises the main results of the 12 reports published during the year. The list of reports and the overall scores are given below. Two reports were awarded the highest score (green), five green-amber, four amber-red and one red.

The report also lists a total of nine overall lessons from its work. Its overall conclusion is that ‘DFID at its best is capable of outstanding performance and is rightly recognised as a global leader on many aspects of development assistance’ (Pg 26). However,

There are some quite sharp challenges embedded in these comments. For example:

It is a pity that ICAI is not always clear about the standard against which it is comparing DFIDDepartment for International Development activity. It does sometimes feel as though ICAI is setting an impossibly high standard, so that DFIDDepartment for International Development is bound to fail. The learning report was a case in point. ‘Who does this better?’, one wants to know, in general, in Government, or in the development sector? More comparisons would definitely be useful.

It is also interesting to compare ICAI’s learning with those in DFID’s own evaluation summary. As noted, the 2014 report is not yet available. However, the 2013 report contains some useful insights, organised by sector of interventions and identified as ‘initial indications’. Some points are: 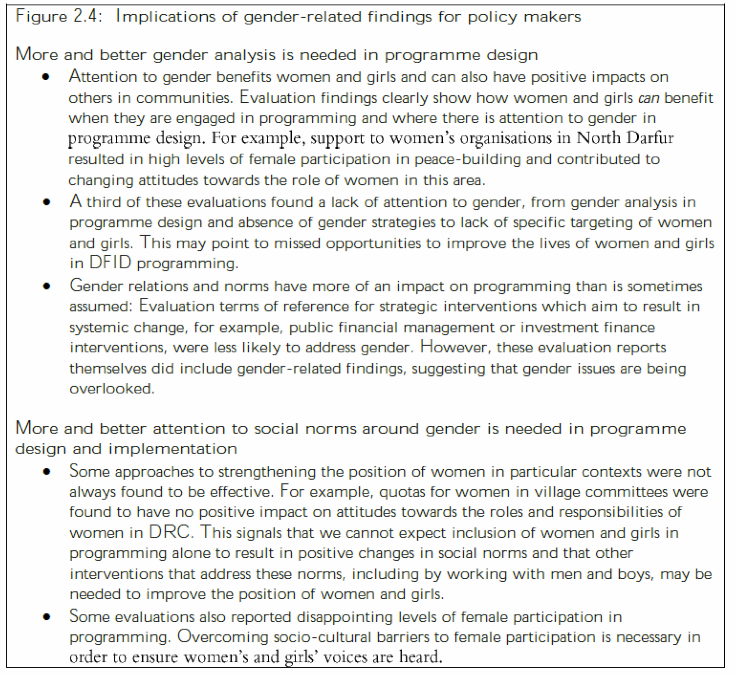 Two interesting questions from this list (presumably to be updated in 2014) are (a) whether they are qualitatively different to those obtained by ICAI – which reflect on the question of whether or not ICAI offers real value-added; and (b) whether or not ICAI has taken this work into account in formulating its own recommendations.

An important question is whether the 2014-15 work programme is adequate to follow-up on strategic issues raised, as well as fulfil ICAI’s other mandates. Nine reports are planned for 2014-15, giving a good range of work. They are listed below. The multilateral report will be a useful adjunct to the planned Multilateral Aid Review.

Another issue is whether ICAI should be less coy about ‘policy’, as in the following statement at the beginning of the Annual Report:

‘The International Development Committee, chaired by Sir Malcolm Bruce MP, is the House of Commons select committee that provides oversight of the Government’s aid policy – a clear difference between their and our responsibilities, as policy is outside of our remit. ‘

In fact, ICAI reports (a) examine DFID’s policy work (for example, in country assessments), and (b) have implications for policy. Would it not be more honest, and interesting, to make policy issues central to the analysis of aid impact? This could be done without trespassing on the policy remit of the IDC. Indeed, it might well enhance complementarity.

Finally, none of the above should be taken to suggest that there is not more work to do. The Select Committee report on ICAI, forthcoming, will doubtless make many useful suggestions.