A new case must be made for aid. It rests on three legs.

This blog was first published on the Oxfam blog maintained by Duncan Green, From Poverty to Power. See: http://oxfamblogs.org/fp2p/a-new-case-must-be-made-for-aid-it-rests-on-three-legs/.

Is the tide turning on aid? Famine in Africa has rekindled both media and public support.  By 20 March, the Disasters Emergency Committee had raised £24m from the public in only six days. Red Nose Day on 24 March provided another opportunity to demonstrate support. And on aid more generally, the Secretary of State for International Development, Priti Patel made a forceful speech at the BONDBritish Overseas NGOs for Development conference of UK NGOs on 20 March, making the case for action to tackle poverty, and celebrating UK leadership in international development.

So, have the critics in the press been seen off? Can the aid community stand down? No, for two reasons.

First, the dilemmas are real. Critics of aid adduce evidence on waste, corruption, or support for unsavoury regimes. Sometimes, they also raise more analytical concerns about the lack of evidence that aid contributes to growth. Or they make the point that aid on a large scale replaces domestic tax-raising, and thus undermines the relationship between a Government and its people. The recent UKIP policy paper, arguing for an 80% cut in UK aid, cites the Nobel prize winner, Angus Deaton, on the point about growth, and the renowned political scientists, Daron Acemoglu and James Robinson on taxation. Here, humanitarian aid is fine, and perhaps also health, but the rest is not.

In response, it is not enough simply to acknowledge the need to improve efficiency, or cite the undoubted benefits of aid: tackling disease, saving lives, and educating children. Some poor people do live in middle income countries whose Governments could do more, especially if they faced up to the need to tax the rich. Pakistan? Others do live in countries whose Governments have unacceptable records on human rights. Rwanda? Ethiopia? Myanmar? And capital flight, tax evasion, and poor behaviour by private sector companies – all these exist. Making the case for aid must recognise complexity, long chains of causality, and the hard grind of effecting institutional and political change.

In addition, and while it is true that the ultimate aim of aid is to tackle disease, save lives, and educate children, it may not be possible or right to target those issues directly. A generation ago, much aid was, indeed, spent on building health centres or primary schools. That was the right thing to do, because there was simply no money in newly-independent poor countries. Today, however, only 31 countries fall into the World Bank classification of ‘low income’. Of those, no fewer than 27 are classified by the OECDOrganisation for Economic Cooperation and Development as ‘fragile states’, suffering political, security or environmental weakness. The OECDOrganisation for Economic Cooperation and Development points to violence both as a key cause and symptom of low capacity – and says that the failure to address violence means that ‘development financing is out of touch with reality’.

Further, poverty in poor countries often results from problems at global level, or in countries far removed from the front line. Action on climate change is a case in point, impacting on those most vulnerable to droughts or storms, but needing action globally, and in high-emitting developed and emerging economies.

Thus, the new case for aid needs to rest on three legs.

First, understand the problem. This year, for example, humanitarian relief is essential to tackle famine in South Sudan, Yemen, Somalia and Northern Nigeria. But these famines are all man-made and will persist unless political solutions are found. We need to hear from those who understand the causes of conflict, and from the diplomats, generals and politicians. Who, really, has a five-point plan to resolve the conflict in South Sudan or Yemen?

Second, match the instruments to the need. The term ‘aid’ covers many options, from funding health centres and schools, to be sure, through to roads, ports, support to human rights bodies, election monitoring, and even policing. Aid donors have to make choices about what to provide.  A new aid agenda implies radical refocusing of aid on the underlying causes, and muscular conditionality on core issues like human rights and democratisation. British aid initiatives like the Conflict, Security and Stabilisation Fund, the Prosperity Fund, or the International Climate Fund, offer new options for cross-Government working on non-traditional aid issues.

Third, tell a better story and take the public on a journey. The conventional wisdom is that the British public responds well to a case for aid which focuses on local interventions which help individual families, less well to more abstract concerns with global threats like security or climate change. But working with China or India to reduce carbon emissions matters. So does support to the South Sudan peace process. So does working with international business to create new manufacturing jobs. New aid needs new roots in the public mind. 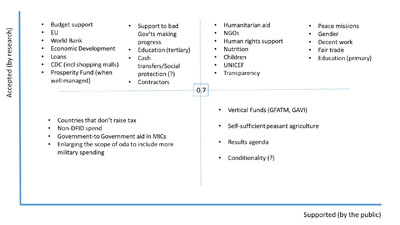 I am completely aware that not one single entry in this Figure is uncontested. And, as always, the details matter: there is, for example, an active debate about whether humanitarian aid should be provided in cash or kind. The point, though, is to emphasise that any discussion of aid needs to begin by recognising its complexity.

A nuanced discussion of aid matters because a hurricane is threatening the consensus on international development. The crisis of faith in globalisation threatens to disrupt traditional routes to growth and poverty reduction, especially via labour intensive manufacturing, supported by free trade. Automation and the deployment of robots will disrupt and restructure the global jobs market. And the imperative of climate action, in all countries, will reconfigure markets and prices around the world. Aid had better be ready to deal with these: to take on future challenges, not relive those of the past.

Note: in case anyone would like to download the matrix and play with it, I have posted a Powerpoint version here. I would be curious to know how you get on.

You can also vote on whether we should make a new case for aid. See here.