Where next for the global climate negotiations?

Where next for the global climate negotiations?

UN Environment’s 2017 Emissions Gap Report, launched this week, has received wide media coverage – and rightly so. I declare an interest, having sat on the Steering Committee since 2012.

The EGR narrative has always tried to achieve a balance between alarmism about the slow pace of emissions reduction and enthusiasm about the potential of technology and policy options.  Thus ‘Pay attention, we are on a trajectory to warming of well over 3 degrees – so get on and save the forests or invest in renewable energy’. That has meant lauding the various international agreements, especially Paris, but also e.g. Kigali (HFCs) and Montreal (aviation); and also reinforcing a point that Christiana Figueres made at the time, that Paris was the departure station not the arrival station.

This year’s report is faithful heir to the meta-narrative, but in my view (and this is a personal perspective) adds to it in important ways:

The Emissions Gap Report is far from the only contribution to the debate on climate action. Just in the last few days, the WMO has issued an alarming report on CO2 concentrations in the atmosphere, PwC has published the 2017 edition of its Low Carbon Economy Index, and Thomson-Reuters have identified the 250 most polluting businesses. This, after all, is the pre-COP season, in which competition for headlines is most fierce. But I do commend the EGR as an authoritative and comprehensive review. The Executive Summary is here.

I have pasted into an Appendix some of the telling diagrams, as well as the box on why extreme weather events are not included in the calculations of least cost trajectories. Figure 1 also contains some of the best ‘killer facts’ from the report (in some cases simplified for communication purposes).

However, really the key issue to focus on is how to impart momentum to further action. 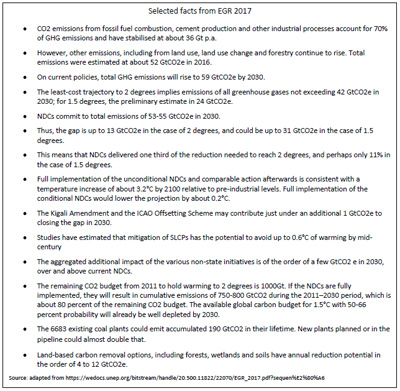 This is what EGR says about the political process:

‘The Facilitative Dialogue and the 2020 revision of the NDCs are the last opportunity to close the 2030 emissions gap.

The key messages (in the Report) send a set of strong signals to the Facilitative Dialogue process scheduled to take place under the aegis of the United Nations Framework Convention on Climate Change (UNFCCC) during 2018, and suggest that ambition should be significantly enhanced in the new and updated NDCs that will be submitted in 2020.

If the climate targets in the Paris Agreement are to remain credible and achievable, all countries will need to contribute to significantly enhancing their national ambitions, augmenting their national policy efforts in accordance with respective capabilities and different circumstances, and ensuring full accounting of subnational action.

Furthermore, a strong commitment to facilitating and stimulating widespread, equitable and accountable innovation will be needed, to ensure that the best the world can offer in terms of cost-effective technology, policy and business models is available wherever needed. Non-state actors need to adhere to high standards of accountability in this respect. Missing the 2020 option of revising the NDCs would make closing the 2030 emissions gap practically impossible.’

Frankly, it was news to me that countries would be expected to deliver revised pledges in 2020. Figure 2 is a diagram from Carbon Brief that summarises the process, based on paras 23 and 24 of the Paris Agreement: a ‘Facilitative Dialogue in 2018’, and, in 2020, ‘countries with 2025 targets communicate their second round of climate pledges, while countries with 2030 targets communicate or update their pledge’. The key word is ‘or’, which allows for the possibility that countries with 2030 targets simply re-confirm the commitments they made in Paris. Has that changed? Will it change at this year’s COP?

Perhaps the Facilitative Dialogue in 2018 will mandate an acceleration of the already-agreed process. In that case, countries will have to scramble to produce new pledges in time for the 2020 COP. It seems to me there are three options:

In an ideal world, option (2) might be preferable, but is a big ask. Countries have a lot of other things on their plate just now. The US, of course, has left the Paris Agreement. In the case of the EU, a new NDCNational Development Council will be shaped partly by Brexit, due to happen in 2019. And although it is true that the papers are filled every day by stories about the falling cost of solar energy, the diffusion of electric vehicles, and the improvement of battery storage, it is also the case that there are stories about the difficulty countries like the UK and Germany are having in meeting existing commitments.  In fact, most G20 countries have work to do even to meet existing pledges (EGR:xvii). 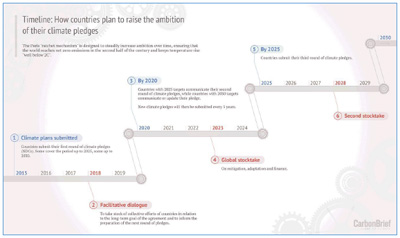 That is why Option (3) might be the best way forward. It need not be unambitious. It is notable, for example, that some high-emitting G20 countries have produced pledges which are higher than projected emissions under current policies, so that more ambitious pledges should be easy to achieve (EGR:20): Russia falls into this category (EGR:24). Others may be able to demonstrate faster reduction than planned by accounting better for non-state initiatives. It is never clear whether ambitious pledges by cities and companies are already accounted for in NDCs, nor, indeed, whether they will actually be delivered. But as the analysis in EGR demonstrates (Pgs 25ff and Figure 5 below), the best, most careful estimates of the impact of non-state initiatives suggest a substantial contribution to closing the gap, at least some of which is likely to be additional to NDCNational Development Council commitments. As noted, more transparency and better accounting are required. This could be a task for the Global Climate Action Summit, convened by Governor Jerry Brown of California, and due to be held in San Francisco in September 2018. In any case, better accounting of current policies and trajectories could impart real momentum to the 2020 COP.

Of course, that will not be enough. The EGR makes clear that early action by 2020 is both necessary and cost-effective in the long run. Total greenhouse gas emissions need to peak by 2020, but are predicted to continue increasing until 2030 under current policies. Given the lags in implementing new policy, especially in the case of large infrastructure, the sooner new commitments are made, the better. It will be especially important to phase out coal, and deal with fossil fuel subsidies. As the report notes, ‘between 80 and 90 percent of coal reserves worldwide will need to remain in the ground, if climate targets are to be reached. This compares with approximately 35 percent for oil reserves and 50 percent for gas reserves.’ (EGR:xv). Managing the politics will of course be key.

EGR does, however, offer grounds for optimism that the emissions gap to 2030 can be filled. It is remarkable, it says,

‘that a large part of the potential consists of just six relatively standardized categories: solar and wind energy, efficient appliances, efficient passenger cars, afforestation and stopping deforestation. These six measures sum up a potential of 15–22 GtCO2e, making up over 40 percent of the total potential. All these measures can be realized at modest or even net-negative incremental costs, and in most of the cases there are proven policies that can be replicated.’ (EGR:xix).

This ‘saving’ of CO2 would be enough to fill the gap, even to 1.5 degrees. It would also deliver considerable co-benefits, like reduced pollution. So, countries have every incentive to accelerate.

Appendix: Some key diagrams from EGR 2017 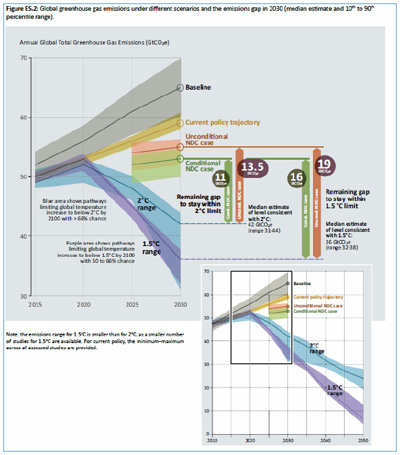 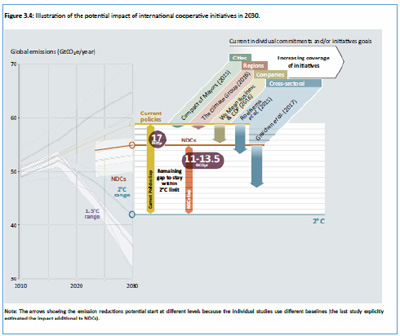 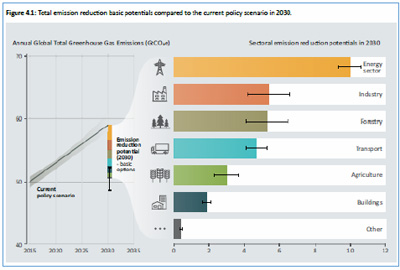 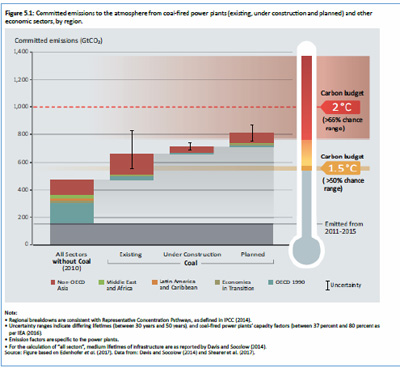 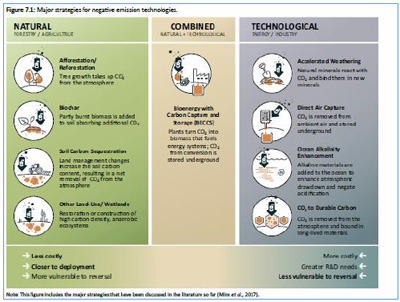 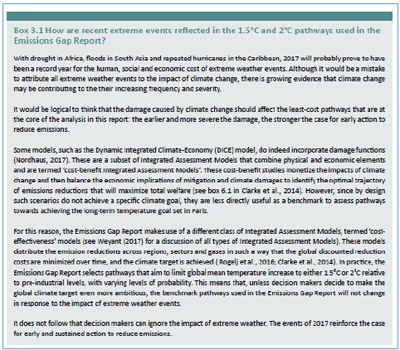 # G20? — Neil Bird 2017-11-06 13:48
Good blog, but I was surprised that you did not include any bullet point on the G20 members in your ‘selected facts from EGR 2017’; such as members of the G20 “collectively generate around three quarters of total global greenhouse gas emissions” (page 5). This focus on the performance of the G20 is refreshing, as it shows where the responsibility for action lies, and what individual country trajectories currently look like (Figure 3.3 – which would have been a very useful addition in your blog appendix) .
Reply | Reply with quote | Quote
Refresh comments list