I coined this slogan for leaders when writing up the climate change thread of the ODI Global Reset Dialogue. The climate change dialogue ran alongside threads on global governance, economics and rights, moderated respectively by Sara Pantuliano, Rathin Roy and Irene Khan. I was trying to capture the flavour of contributions by our climate change leaders (Mary Robinson, Teresa Ribera, Adair Turner, Laurence Tubiana and Leena Srivastava), but also to draw on my own experience of thinking and writing about (and to a limited extent, living) the business of leadership in global development.

There is of course a huge literature on ‘leadership’: 2.6 billion hits on Google, over 4 million even on Google Scholar. The literature ranges from political leadership, through to leadership in different institutional contexts, including research institutes and think-tanks. ‘Leadership’ is often distinguished from ‘management’ (see Figure 1, courtesy of Dorling Kindersley, somewhat disparaging of managers, I feel), but there is a relevant literature on ‘managing change’, as well as on ‘leading change’: 4 million hits on Google Scholar for the first, 6 million for the second. And just to make matters more complicated, there is also a literature on how change happens: skip Google, but Duncan Green’s book is a useful primer. I reviewed it here, describing it as ‘an aspirational playbook for social activists in developed and developing countries’. 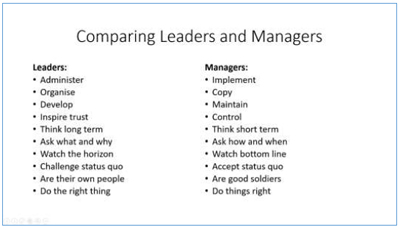 In my experience, of the policy world, change happens when three things come together. The first is leadership. The second is civil society action. And the third is the power of a good idea. Duncan covers civil society action. All the work on think tanks covers the power of a good idea – there is lots elsewhere on the website on how to frame and disseminate ideas (see here).  So, what about leadership?

I have written about leadership before, notably in the context of climate change (e.g. here, with a five step plan for how to win the argument on climate change). I have also had a few favourite books on the topic over the years (Figure 2); and recently discovered that a much-admired historian, Doris Kearns Goodwin, has a new book about US Presidents, called simply ‘Leadership’. Reading list alert: she has a four page bibliography on the topic, covering topics like communication, emotional intelligence and crisis management.

There are a couple of themes to the work I have done. Mainly, it is important to connect, and tell a good, inspiring story, but also not to stop there: implementation matters.  Robert Caro on Kennedy (the Camelot dreamer) and Johnson (the machine politician) was inspirational in that context.

The story matters, which is where the Motivate comes from in 'Motivate. Mobilise. Manage. Repeat' (3MR). Jonathan Haidt is great on our moral tastebuds, or read Sam Leith on the art form of rhetoric. You will find me in presentations trying to cover the moral range from care to liberty (Haidt) and taking care to follow Mark Antony in Shakespeare’s Julius Caesar and sequence ethos, logos and pathos (Leith). Simple stories and images work best (see the five step plan on climate change), but there are choices to make in development: is it best to favour empathetic stories about the plight of people in poor countries, or to emphasise self-interest, and what happens if the two sets of messages are somehow contradictory or cancel each other out? Oxfam initiated important work on ‘finding frames’ back in 2010-11, and others have been active since in exploring what works with whom: see for example the work of the Development Engagement Lab.  Know and segment your audience, I guess.

Political leaders need the space within which to act, which is where civil society comes in. Sometimes politicians win over the populace. Sometimes, they in turn are won over by the arguments of civil society. Sometimes, they may feel irresistible pressure (think Marcus Rashford this summer on food vouchers for hungry children in the UK). And sometimes, politicians may themselves seek to bolster support by asking civil society to be active in a particular area: ‘Reverse Lobbying’ is a recognised term and another ‘thing’ on Google. Make Poverty History in the 2000s contained all four elements, including reverse lobbying of NGOs by Downing Street, to support increases in aid. Beware, however: movements and alliances need not be benign. As I observed about Duncan Green’s book ‘Sauce for the goose, I fear, can also be sauce for the alt-right gander.’ Brexit, anyone? The rise of the populist right?

Anyway, that is the Mobilise in 3MR. How about Manage?

This is LBJ rather than Kennedy, counting the tally sheets in the Senate, and plotting the pathway through Congress for the Civil Rights Act. Andrew Adonis picks up the theme and emphasises the importance of implementation in his memoir of being an education minister. There are twelve lessons, which are about building support as well as about implementation (Figure 3). Note, however, the importance of thinking about reform as a marathon, not a sprint, and the need for leaders to micromanage constantly, but only important issues. Data plays a role, here. I am not a great fan of detailed administrative targets, but Instruction to Deliver, by Michael Barber, offers an account of how delivery at this level was managed in the Tony Blair era. 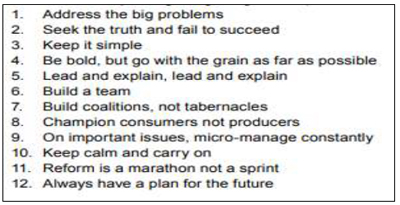 Finally, a key lesson in development is about the importance of learning by doing: process planning, as we used to call it in rural development, as opposed to blueprint planning (see, for example, Robert Chambers' classic book from 1983, drawing in this instance on work by Korten), or in food security (e.g. here from 1996 and here from 2001) . This thinking has been developed under the umbrella of Complexity Theory (see e.g. Ben Ramalingam’s book, Aid on the Edge of Chaos, and my review here) and Adaptive Development. The latter is described on the ODIOverseas Development Institute (London) website as follows, with a manifesto for Doing Development Differently (Figure 4):

‘ways of working that focus on testing, adapting and learning in all areas of our research, be it work on justice, conflict, service provision or democracy. It requires liaising with reformers to identify, debate and refine problems, and being politically smart about how donors navigate diverse contexts.’ 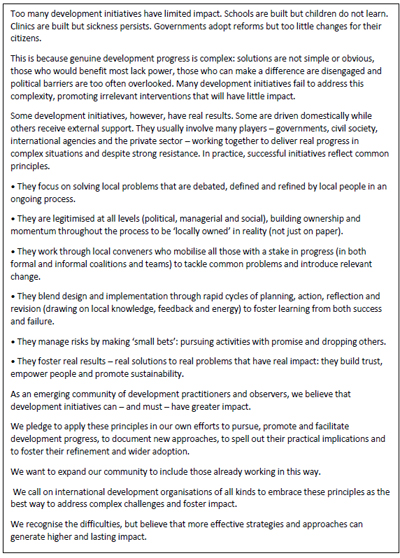 See especially the fourth bullet of the manifesto, which calls for ‘blending design and implementation through rapid cycles of planning, action, reflection and revision (drawing on local knowledge, feedback and energy) to foster learning from both success and failure’.

Is this relevant to the current debate in the UK about so-called Government U-turns in dealing with COVID-19? Should a change of plan be seen as a sign of weakness or a sign of strength? I raised this point on Twitter the other day. Anne Tallontire commented: ‘The issue is acknowledging it, learning and adapting from the mistake, not blustering and blaming’.

The challenge is to apply the principles of 3MR to current problems. The climate leaders made a good fist of this for ODI. Some key points (though read my full blog here):

(For anyone interested in Doris Kearns Goodwin's leadership lessons (more than 70 in total!), I have posted here the subheadings of her four chapters on transformational, crisis management, turnaround and visionary leadership, each dealing with one aspect of the work of one US President).