How to avoid a climate disaster: The solutions we have and the breakthroughs we need by Bill Gates

How to avoid a climate disaster: The solutions we have and the breakthroughs we need

‘There are two numbers you need to know about climate change’, Bill Gates’ new book begins. ‘The first is 51 billion. The other is zero.’

This framing of the GHG challenge – 51 Gt now, zero as the target – runs through the narrative. Each topic – manufacturing, agriculture, transport, and so on – is introduced by the share of the 51Gt it currently contributes: 31% for manufacturing, 19% for agriculture, 16% for transport etc . . . The framing gives shape to the book and helps distinguish the relatively easy (e.g. renewable energy) from the very hard (e.g. cement).  It also leads Gates to identify the technological priorities needed (Figure 1), and to make recommendations about the leadership that Governments need to show in enabling and supporting transition. A key task is to reduce the ‘green premium’ – the extra cost of adopting climate-friendly technologies. 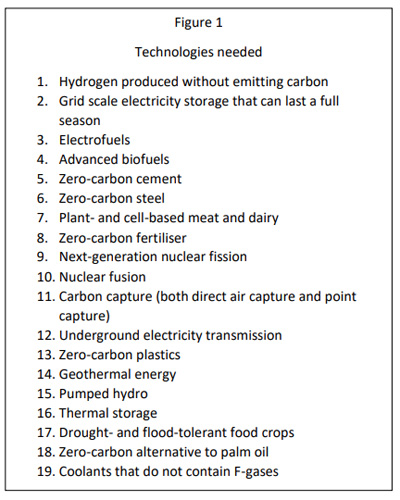 All this is pretty helpful, and enthusiasts for a mission-led approach to innovation, as in Mariana Mazzucato’s new book, will find the approach resonates. Gates emphasises that it is necessary to work on technology, policy and markets at the same time.

He does not, rightly in my view, think that complete decarbonisation can happen by 2030, but usefully emphasises that decisions made in the 2020s will determine whether or not net zero can be achieved by mid-century. And he makes this important point about a net zero goal:

‘It might seem like ‘reduce by 2030’ and ‘get to net zero by 2050’ are complementary. . . . (But) not necessarily. Making reductions by 2030 the wrong way might actually prevent us from ever getting to net zero. Why? Because the things we’d do to get small reductions by 2030 are radically different from the things we’d do to get to net zero by 2050. . . . For example, if ‘reduce by 2030’ is the only measure of success, then it would be tempting to replace coal-fired power plants with gas-fired ones . . . But any gas plants built between now and 2030 will still be in operation come 2050 . . . ‘We would meet our ‘reduce by 2030’ goal, but have little hope of ever getting to zero’.

The six chapters which deal with the different slices of the 51 Gt are sometimes tendentious, but always informative. Gates is a proponent of nuclear power, not least because it uses a great deal less cement, steel and glass than solar, hydropower, wind or geothermal. He sees some merit in plastic. He has an open mind on artificial meat. He has some reservations about the long-term potential of electric vehicles. And, as Figure 1 suggests, he has a practical list of innovations that might be pursued, including carbon capture and nuclear fusion.

All this sounds pretty techy, as you might expect from Bill Gates. ‘I think more like an engineer’, he says, ‘than a political scientist’. He admits to being a ‘geek’, and a ‘pretty big nerd’ about infrastructure. But it is important to note that his perspective is strongly humanist, informed by his work with the Gates Foundation in developing countries.

Gates constantly emphasises the need of the poor for more energy, better access to transport, and just more stuff. He is highly aware of income disparities. And he argues for a just transition. A chapter on adaptation focuses mainly on developing countries. The CGIARConsultative Group on International Agricultural Research gets a plug, there is material on forests, as well as on adaptation in cities. The vulnerability of women is emphasised, and overall,

‘rich and middle-income people are causing the vast majority of climate change. The poorest people are doing less than anyone else to cause the problem, but they stand to suffer the most from it. They deserve the world’s help, and they need more of it than they are getting’.

The last two chapters offer a plan for getting to zero. Both the supply and demand for innovation need to accelerate. On the supply side, this mean quintupling clean energy and climate-related R and D, making bigger bets on high-risk, high-reward R and D projects, directing R and D to the greatest need – and doing all this in partnership with industry. On the demand side, prices, regulations, procurement practice and infrastructure spending all need to be improved. Governments at all levels have parts to play; and so do individuals, as consumers and activists.

It is easy to imagine advocates of degrowth bristling at the technology-driven approach adopted by Bill Gates. There is very little here on the need to address overall limits to growth, or the glaring disparities in emissions between rich and poor countries. For a clear perspective on this topic, see Jason Hickel, in his debate with Stephane Hallegatte. It is also interesting to ask how different a strategy would look if it were built bottom-up up from the climate compatible development plans of individual (developing) countries. There is nothing here on Loss and Damage, for example; nor on the trade prospects of emerging economies in a carbon-constrained world.

It would also have been good to have Bill Gates championing universities, research institutes and industrial capability in developing countries, as well as in developed. A postscript on the lessons from COVID does not mention the crying need to improve access to intellectual property on vaccines and the industrial capacity to make vaccines in Africa. What is true of vaccines is surely also true of the technologies for climate-related innovation.

Overall, however, Gates’ book is analytical and informative. It is enlivened by personal anecdotes, is reasonably transparent about how Bill Gates spends his own money in the climate space, and does not hide from criticism of issues like his use of a private jet. Josh Daniel is credited in the acknowledgements as a writing partner. He deserves praise.