Kate Raworth’s book on doughnut economics has received ecstatic reviews – George Monbiot in the Guardian even describes her as the J.M. Keynes of the twenty-first century. She doesn’t need a further encomium from me. For the record, though, I have been a fan of the doughnut since Kate first launched the idea in an Oxfam Discussion Paper in 2012; and also a fan of her writing and communication skills. High quality analysis and communication are both in evidence in this book.

The new book is more than a simple presentation of the doughnut - of the socially just and environmentally safe space between, on the one hand, planetary boundaries, and, on the other, social and economic minima (Figure 1). Kate’s target is no less than the hegemony of economics: the narrowness of its goals, the limitations of its theory, the poverty of its method, and its failure to reach out to other ways of thinking. The scars of her early, and apparently unsatisfying education in economics are deep.  In a revealing tweet on 15 April, Kate replied to an(other) admirer: ‘I set out to write the book I that I wish I could have read as an undergraduate’. 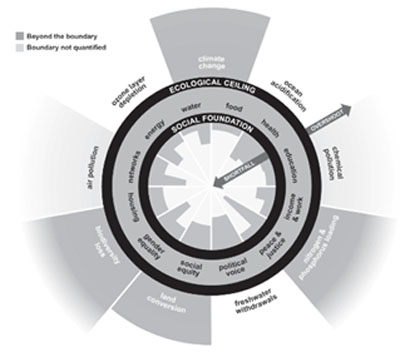 So what should undergraduates be taught? And what ways of thinking are needed more generally by ‘twenty first century economists’? There are seven of these, each of which is the subject of a chapter in the book:

A summary of the seven changes required in ways of thinking is given diagrammatically, as below (and apologies for the poor quality image): 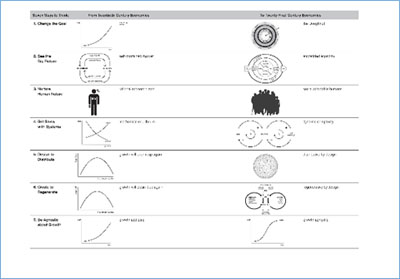 This is all presented as a challenge to orthodox thinking, but also as a manifesto. There are specific proposals throughout, from alternative ways of measuring progress, through careful use of behavioural nudges, to open-source intellectual properly, better city design, and reform of global finance and taxation. In the last chapter, Kate announces that ‘we are all economists now’, and calls for activism to deliver a doughnut-compliant world.

The book ranges widely. Kate has mined her undergraduate economics notes (Ricardo, Smith, Keynes, Hayek, Samuelson, Solow), added some contemporary thinkers to her library (Joseph Stiglitz, Ha Joon Chang . . .), and collected lots of nice examples and quotations. It was fascinating to learn, for example, that the board game Monopoly was originally designed by its creator, Elizabeth Magie, with two sets of rules, one to illustrate the evils of predatory capitalism, the other to illustrate the benefits of social solidarity and cooperation. How interesting that only the former survived. Also interesting to read about financial nudges undermining social responsibility: when parents at nursery schools in Israel were fined for picking their children up late, they regarded the fine as a payment which legitimised their action, stopped worrying, and became not more punctual, but less.

The seven ways of thinking are intuitively and intellectually attractive. But does the book range widely enough, and is the list complete?

On the first question, it was surprising to find, given Kate’s history at UNDP, with the Human Development Report, and at Oxfam, how little there was in the book of development economics. One can search in vain: for the work of Dudley Seers on the limitations of the special case of high income economies, or on alternatives to GDP; for ILOInternational Labour Organisation on redistribution; for dissenting economists, like Hans Singer, on the problems of neoliberalism and the Washington Consensus; for Frances Stewart, Richard Jolly and Andrea Cornia on alternatives to structural adjustment; for Jeff Sachs, or Bill Easterly, or Paul Collier or Dani Rodrick. Even Amartya Sen only gets one mention. There is only one Human Development Report mentioned in the bibliography, and only one World Development Report: yet both championed environment, redistribution and other themes in the 1990s.

There is an important clue to how Kate thinks about development in a passage on inequality, which downgrades inter-country inequality and instead poses the modern-day challenge as one of dealing with intra-country inequality. Citing Andy Sumner, she says that ‘for the first time, ending human deprivation is becoming as much a question of tackling national distribution as of international redistribution . . . the new geography of deprivation puts tackling national inequalities high on the agenda of ending poverty for all’. In fact, Sumner makes the point even more clearly. Kate quotes him as follows: ‘a fundamental reframing of global poverty is approaching, and the core variable to explain global poverty is increasingly national distribution and thus national political economy’.

No-one can quarrel with the argument that the number of low income countries is falling. However, to draw the conclusion that national distribution is the only remaining issue must surely amount to charging off down the wrong path. There is no discussion of global public goods: Inge Kaul is another economist not mentioned. The role of trade in lifting hundreds of millions out of poverty is not acknowledged, apart from a brief plea for fair trade. Tax avoidance is discussed, but conflict, migration, the arms trade, drugs – the global public bads which shape outcomes in many developing countries, and the stuff of much debate in the fields of development economics and development studies - none of these really feature. With global forces so powerful, protectionism and isolationism on the rise, and global institutions so fragile, any manifesto must surely include proposals to nurture and rebuild multilateralism. Is that an eighth way of thinking?

An eighth way of thinking is certainly needed in climate action. In addition to the seven core ways of thinking, development economists who work on climate policy focus on topics such as: international regime and negotiating frameworks, as in the UNFCCC; the scope for international carbon taxes and/or carbon tariffs; and international technology transfer. They also emphasise that climate action will require a new industrial revolution on a global scale, one which will disrupt and dislocate current ways of working , creating winners as well as losers: social protection and action to support transition in disadvantaged and forgotten communities also plays an important part. This is about much more than redistributive justice, land taxes and the like, as discussed in the chapter on inequality: it is about sectoral and regional balance, gender, age, and the structure of the real economy.  A recent paper provides an overview of the issues. Perhaps ‘leave no one behind’ amounts to a ninth way of thinking?

Do these gaps and additions invalidate the value of the doughnut as a heuristic, or the search for grand narrative. No, this is a book to be celebrated. Ways of thinking 1-7 certainly help focus on the right policies, for example in assessing the contribution of the private sector or dealing with growth. In this respect, Kate’s framework will help keep researchers and policy-makers honest: it is a template which will hold them to account.

But there is fertile territory for a second edition.

# RE: Doughnut Economics: Seven Ways to Think like a twenty-First Century Economist Kate Raworth — Robin Stafford 2017-05-10 14:29
Simon - I think Kate has written a very different and more ambitious book to the one you may have been looking for. Without trying to speak for her, I see it as aiming to cover a far wider field than just development or even just economics, and to be read by a much wider audience than, dare I say it, policy and academic folk in the development world.

As result she includes topics such as systems thinking and complexity, and has made it very readable. Certainly compared to too many dry and dense development tracts I've read! To achieve that, of course she has had to be selective in the material she has used, but as a result it is a manageable length and not too crammed with references. The positive reception it has received suggests Kate has been pretty successful in her aims
Reply | Reply with quote | Quote
# Another Turning Point — Tim 2017-05-10 15:44
As a Development Studies undergraduate in the mid 1980's it was Fritjof Capra's Turning Point that did the rounds among students dissatisfied with wondering "Why Economists Disagreed"!

Look forward to reading Kate Raworth's take on our current predicaments and how much being "agnostic on growth" will finally become the benchmark in the commercial world.

Omissions? The struggle we now face is that everything is being turned inside out - the doughnut is a great way to capture that fundamental change; I would suggest this is due to the Internet. We are only at the start of this change and societal impacts are going to be manifold. I will look for bridges from the 20th to the 21st century but will allow for the omissions as narratives today speak from the individual back to society not a demand that everything should have been referenced. After all, how many business and leadership books cover in essence very similar ground.