Do Not Disturb: a challenge to development actors on human rights and authoritarian development

Do Not Disturb: a challenge to development actors on human rights and authoritarian development

I am not in a position to judge the accuracy of Michela Wrong’s dissection of the political history and current situation in Rwanda. But she is highly respected in the development community, and her new book, Do Not Disturb, is forensic in its detail and an unsettling, even shocking, read. The book is garnering enthusiastic reviews (e.g. here by Edward Clay and here by Phil Vernon, both experienced observers of the region). If Michela Wrong is even half right about political repression, extra-judicial killings inside and outside the country, destabilisation in the DRC, and corruption, then (a) she is a brave woman for speaking out, and (b) she lays down a challenge to aid donors and other development actors.

Michela Wrong is not alone. There are many headlines just now about killings and poor judicial processes in Rwanda, with calls for change from the UN Human Rights Council, the European Parliament, and the UK and US Governments. The country is hosting the Commonwealth Heads of Government in June, and it will be surprising if its human rights record is not on the table: Lord Ahmad, Minister of State in the UK’s FCDO, said on 3 February, using diplomatic language, that: ‘As host of the 2021 Commonwealth Heads of Government Meeting and incoming Chair-in-Office of the Commonwealth, we look forward to Rwanda championing Commonwealth values of democracy, rule of law, and respect for human rights’.

The challenge to donors is a familiar one. In fact, there are multiple challenges. Does progress with respect to economic, social and cultural rights trump a bad record on civil and political rights? Is authoritarianism a staging post on the road to liberal democracy? Does history (in the form of a genocide) justify turning a contemporary blind eye? And, most important, what are the options open to outsiders, including those who provide large amounts of aid?

Rwanda is far from the only place where these questions are asked. Uganda and Ethiopia are two other current examples. How about Myanmar? China? Russia? Belarus? The latest annual report from Freedom House, just out, is entitled ‘Democracy Under Siege’, and says that

‘As a lethal pandemic, economic and physical insecurity, and violent conflict ravaged the world in 2020, democracy’s defenders sustained heavy new losses in their struggle against authoritarian foes, shifting the international balance in favour of tyranny. Incumbent leaders increasingly used force to crush opponents and settle scores, sometimes in the name of public health, while beleaguered activists—lacking effective international support—faced heavy jail sentences, torture, or murder in many settings.

These withering blows marked the 15th consecutive year of decline in global freedom. The countries experiencing deterioration outnumbered those with improvements by the largest margin recorded since the negative trend began in 2006. The long democratic recession is deepening.’

Michela Wrong has been on the case for a while, of course, and not just in Rwanda. In 2016, we invited her as an after dinner speaker to an ODIOverseas Development Institute (London) conference on the future of development agencies. She had been writing about Rwanda and the general problem of political malfeasance in ‘donor darlings’ (see e.g. here and here), and duly laid into the senior representatives of the world’s aid agencies. Finally, one of them spoke up. ‘We know’, he said, ‘we know. You really are not telling us anything we don’t know about these regimes. But the question is, ‘what are we to do?’’

That, it seems to me, is where the rubber hits the road for aid donors. Cut off aid? Cut off all except humanitarian aid? Cut off government-to-government aid, leaving just work through NGOs? Cut off budget support? Suspend preferential trade arrangements? Agree sanctions? Consider military involvement? Look for other levers? Or carry on as before, just perhaps investing a bit more in justice reform or journalism training, hoping that a quiet word in the leader’s ear will encourage change?

These questions have been the meat and drink of political scientists in research institutes, think-tanks and Government agencies. ‘Getting to Denmark’ was always an unrealistic ambition in the short-term (Fukuyama), with ‘good enough governance’ the more limited target (Merilee Grindle). ODIOverseas Development Institute (London) researchers, led by David Booth, talked about ‘going with the grain in African development’ (e.g. here), the principle being that there was some potential in regimes characterised by ‘developmental patrimonialism’.

Others have been more cautious about the long term outcomes. For example, new research from the Africa Centre for Strategic Studies suggests that ‘the lack of legitimacy and accountability are at the root of many of Africa’s armed conflicts, reflecting an inability of these political systems to accommodate participation, contestation, and power-sharing. Nic Cheesman has recently written that ‘although negotiated and smooth political transitions are not impossible, they are less likely in heavily divided societies and have been rare in sub-Saharan Africa. Funding African authoritarian regimes may therefore look like a good decision in the short run, but developmental gains may subsequently disappear.’

Tim Kelsall, now with ODI, has responded, ‘taking issue with Nic Cheesman’s characterisation of the (ODI) Programme, . . . his contention that authoritarian development is unsustainable in Africa, and the assumed implications for policymakers.’ In brief:

‘While it may be unrealistic to think that a vibrant multiparty democracy could even survive in the political contexts of Ethiopia or Rwanda, let alone oversee an equivalent level of development, it is less far-fetched to think that those states could be governed with somewhat less repression than they currently employ, and yet still achieve most of their economic goals. The ambition should be progress on all types of rights ie economic, social and civil, not necessarily equally or evenly, but without one taking precedence to the complete exclusion of the other.’

It is above my paygrade to try and adjudicate as between these views. However, the implications are important for development cooperation. Tim Kelsall wrote about authoritarianism, development and democracy in 2014, and offered the following decision tree for governance advisers working on authoritarian regimes. The bottom left hand corner is especially relevant to current concerns. The question is ‘how is the human rights situation?’, and there are two options: ‘not good, but could be a lot worse’, in which case the answer is to continue support while continuing to advocate for human rights; and ‘appalling’, in which case ‘think about whether discontinuing support would improve matters’. 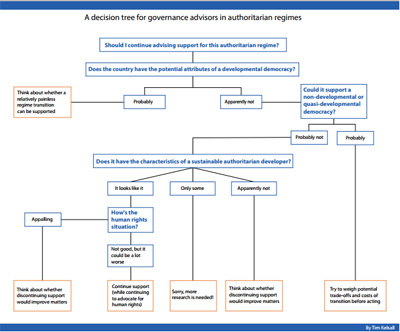 That is a good start.  It would really help to have a definition of ‘appalling’! But also, the list of donor options above suggests that a more nuanced discussion is needed.

In my experience of working in or on countries characterised by patrimonial or authoritarian governance, and in those with civil war, humanitarian aid is non-negotiable, with support to NGOs not far behind. Humanitarian aid is not easily ring-fenced from political interference, however, as illustrated by the frequent invocation of International Humanitarian Law. The EUEuropean Union is the latest to engage on this topic, with an enhanced policy championing IHL, to protect both civilians and aid workers.

At the other end of the scale, budget support is usually the first domino to fall, as it just has for the EUEuropean Union in Ethiopia. That leaves quite a bit in the middle, including sector support, ‘state-building contracts’, and individual projects. Clearly, donors have difficult hands to play. They do not want the poor who benefit from aid projects to pay the price of poor governance. They know conditionality has limited impact. But they also know that the taxpayers in their own countries who pay for aid simply hate corruption and ‘waste’. In their shoes I would think about how game theory might help them negotiate with recipients, re-reading the work of Paul Mosley and Elinor Ostrom. But I would also be looking for non-aid levers of influence.

Donors do take human rights seriously, and ministers often come into office with strong statements about an ethical foreign policy, or the non-negotiability of rights. The UK Integrated Review of Security, Defence, Development and Foreign Policy, just published, emphasises the value of open societies, and of ‘universal human rights, the rule of law, free speech, fairness and equality’.

In my experience, though, ministers quite quickly adopt a pragmatic position, focusing on ‘direction of travel’: helpng countries move, in Tim Kelsall’s phrase, from ‘appalling’ through ‘not good but could be better’, and then perhaps eventually to Denmark. Nevertheless, these are difficult and uncomfortable compromises. Military coups and egregious human rights abuses rightly cause outrage: see e.g. Myanmar and the Uighur in China.

In any case, the starting point for any policy has to be a clear-eyed assessment of the human rights situation in a country, and its implications. Donors say ‘they know’, but some of the most uncomfortable reading in Michela Wrong’s book relates to the way in which, she says, (some) donors allow their judgement to be clouded. They ‘need to be needed’ . . . are ‘desperate for success stories’ . . . adopt a ‘hard-nosed attitude to the odd army massacre, journalist’s disappearance or opposition leaders’ assassination’ . . . are ‘prey to groupthink’ . . . and are ‘historically naïve’. Citing historian Gerard Prunier, she says this can be ‘seen as a lingering form of racism’.

The new head of USAID, Samantha Power, is the latest to be tested on this issue – to stand at the point of choice on the decision tree. She brings a strong human rights perspective to her role. Her book, ‘The Education of an idealist’ is a clarion call in that respect. Will she reframe action on human rights, for the US and other donors?