Challenges for the activist think-tank

Challenges for the activist think-tank

Some think-tanks focus exclusively on research and policy engagement. Some describe themselves as ‘change hubs’, providing an open, collaborative space for programme design as well as research. Some describe themselves as ‘think and do tanks’, piloting innovative programmes. Some have political affiliations. Some go even further, and actively work with, support and join with campaigning groups. There is a continuum, with pure think-tanks at one end and activist think-tanks at the other.

For examples of activist think-tanks, consider the mission statements of the New Economics Foundation and Positive Money (Box 1). Both carry out research. In addition, the former ‘works with people igniting change from below’; and the latter describes itself as a ‘research and campaigning organisation’.

Both these organisations are supported by Partners for A New Economy. This is a donor collaborative, which explicitly sets out to

‘bring new thinking and approaches to traditional economics, (by supporting) “change catalysts”. (These) play a pivotal role in helping to repurpose our economic system, and together they’re helping to build a movement for an economic system that’s fit for the challenges of the 21st Century.’

There is a similarity here with the research departments of NGOs, which offer often excellent support to policy and campaigning work: think, for example, of policy work at Oxfam or Save the Children. But to the extent that activist think-tanks are still independent think-tanks, they face a number of challenges that more traditional outfits do not.

I wanted to explore these challenges, and did so in January 2022 with current and future think-tank leaders at the On Think Tanks School for Think-Tankers. This was the fifth time I had worked with the School, and, as in previous years, I asked them to work with me on a ‘pizza night’ training case – there are now 7 of these, covering policy engagement, various dimensions of think-tank governance, the management of cross-cutting issues in think tanks, and think-tank management in times of crisis.

The office was closed and everyone had left, but in one corner of the building a light still burned. Cecilia wanted to go home to her family, it was pizza night, and she had hardly seen the children all week. But there was a Board meeting coming up, and as Director of the think-tank, it was preying on her mind.

In the old days, Cecilia had been careful to nurture an image of neutrality and objectivity among her staff, emphasising careful peer-reviewed research. Individual researchers could take positions, but the institution did not. Cecilia had always been sure to maintain a good balance of different perspectives on the Board. But the sands, she felt were shifting. She herself was passionate about delivering real change, and so were many of her staff. Walking round the office, she would notice that many staff had pictures of Greta Thunberg pinned to their walls; many also wore the badges of campaigning groups, like Extinction Rebellion. Some members of the Board, too, were committed activists. She expected to see them any day, gluing themselves in protest to the entrance doors of one multinational or another.

Cecilia could see the attraction of being more outspoken, and of linking up with campaign groups; even of being, in some sense, a campaign group. But mulling things over with her Chair, she could also appreciate the risks. Indeed, the Chair had asked her for a briefing at the next meeting. What differences was she proposing? What were the benefits? What were the risks? And how could the risks be mitigated?

That was a serious challenge. Cecilia pulled off a page from her pad, and wrote a heading:  Challenges for the activist think-tank. She needed to fill that in, answering the four questions the Chair had posed. but it was too late to do more. She thought of the pizza and her mouth began to water. Margarita, she wondered? Or Quattro staggioni? It was time to go home. Cecilia rose, stretched, and switched off the light.

I asked School participants to answer the four questions the Board Chair had posed, in the format below (Figure 1), and suggested some entry points, as in Figure 2. As usual, they did great work, and I have drawn on their ideas in reaching my own conclusions: thanks to them. There are seven points. 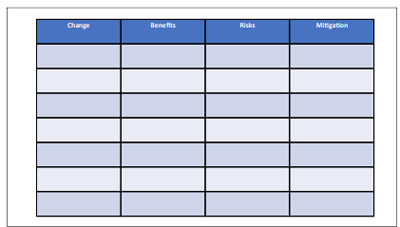 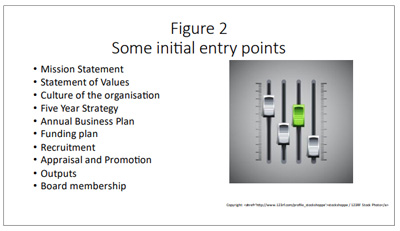 First, be robust about wanting to change the world. That drive, after all, is why we work in think-tanks, rather than University Departments or pure research institutes. All think-tanks, in one way or another, set out to frame the debate, and use their outputs to shift the Overton Window (Box 2). 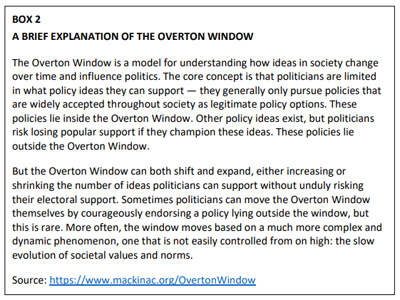 Second, understand that analysing the forces which shape change, including those unleashed by campaigning organisations, is central to the policy work of think-tanks, of whatever kind.  There is a large literature on how think-tanks engage with the policy process (see for example the ROMA model from ODI, or the Kaleidoscope model from IFPRI); but also a large literature on the art and science of activism (for example, the excellent play-book by Duncan Green, ‘How Change Happens’, and his recent thoughts on helping protest movements engage with policy-makers). If activists make use of the Alinsky principles (Figure 3), the least we should do is be aware. 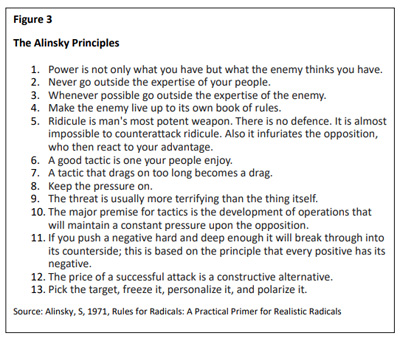 Third, accept and encourage informal links between the staff of think-tanks and campaigning organisations, whether or not the think-tank describes itself as ‘activist’. Even when the institution is careful not to take a formal position or declare an allegiance, many staff members will have links to campaigning organisations which are active in their field. They may help research or write or review reports, or sit on advisory boards, or speak at events. They may even, as Cecilia observed, go on demonstrations or glue themselves to the door of a multinational.

There are benefits to the campaigning organisations and their campaigns, but also to the think-tank: it is useful to be connected to debates and channels of influence, for example, and staff may feel more motivated.

There are some risks to the think-tank, however. Not all campaigning organisations staff want to support are necessarily benign; and not all are seen by Governments (and potential funders) as legitimate.  That is why it is important that staff act, and are identified as acting, in a personal capacity.

Fourth, be aware that both the benefits and the risks rise as the degree of overt and formal activism rises – if the sliders in Box 2 are moved to a higher register. Imagine. A new and more assertive mission statement. Explicit campaigning objectives in the strategy and business plan. Staff recruited and rewarded for campaigning skills. New products, aimed at a campaigning audience. And new funders courted and secured.

On the one hand, all this will offer a more direct connection to some aspects of the policy process. It may be the case, for example, that the think-tank is much more closely connected to non-specialists and to local campaigning groups. New avenues of influence may open up. New funding may be secured.

On the other hand, the quality and legitimacy of research may be questioned, and funding from traditional sources may be at risk. Activist think-tanks may find that their research is not taken seriously (‘they would say that, wouldn’t they?’). They may find that their political access is diminished or funding cut if a political party they have been supporting loses power.

Fifth, think about mitigating actions the think-tank can take. There is much to be said for preserving a diversity of views on the Board, for example. It is also more necessary than ever to assure the quality of research, using advisory panels and peer review. The more funding can be diversified, the better. And financial reserves are crucial to provide a cushion in case campaigning has adverse consequences.

Sixth, as participants in the On Thinks School suggested, consider becoming more activist slowly: try it on a small scale before plunging into the deep end. Choose your battles carefully. And be sure to communicate well with all your stakeholders.

And, finally, remember that even non-activist think-tanks already have many tools to help deliver change. Consider carefully whether those tools are being used to best advantage.