I was glad to return to Geneva, to the Winterschool for think-tankers, this time to work with young think-tank leaders from around the world on policy-relevant research and influence.

We worked on the case study below, adding one more slice of pizza to last year’s set on think-tank governance:

‘The office was closed and everyone had left, but in one corner of the building a light still burned. Cecilia wanted to go home to her family, it was pizza night, and she had hardly seen the children all week. But there was a Board meeting coming up, and as Director of the think-tank, it was preying on her mind.

Quite often, the Board meeting was concerned with routine subjects: the annual Business Plan, for example, or a review of the risk register. Those topics could be difficult and challenging, she knew, and needed careful preparation. This time, however, the task was even more difficult than usual.

The Board had asked her to focus on climate change, and tell her what the think-tank was going to do to help deliver a successful outcome to the climate talks in 2020. This was the year in which countries would have to deliver new pledges, and somehow bridge the ever-growing gap between what was needed to save the planet and what had so far been promised.

That was quite an ask, Cecilia thought. Was she supposed to solve this problem all by herself? Surely not, but she certainly wanted the think-tank to play its part.

Cecilia pulled off a page from her pad, and wrote a heading:  ‘Climate Change: what the think-tank needs to do’. She needed to fill that in, but it was too late to do more. She thought of the pizza and her mouth began to water. Margarita, she wondered? Or Quattro staggioni?

It was time to go home. Cecilia rose, stretched, and switched off the light.’

The PowerPoint is here, and has references to useful materials, including the ROMA suite from ODI, and IFPRI's Kaleidoscope model. See also my own piece on Winning the Argument on Climate Change: A Five Point Plan.

The participants did a great job. I have summarised the discussion in ten points, as below. There are some important lessons, some familiar from the literature on bridging research and policy, others new. I especially liked the participants' idea that commitment and enthusiasm could be built by taking up a programme of action internally. In the case we studied, climate change, for example, this could be by introducing a policy on emissions, especially flights, or by setting up a recycling group. 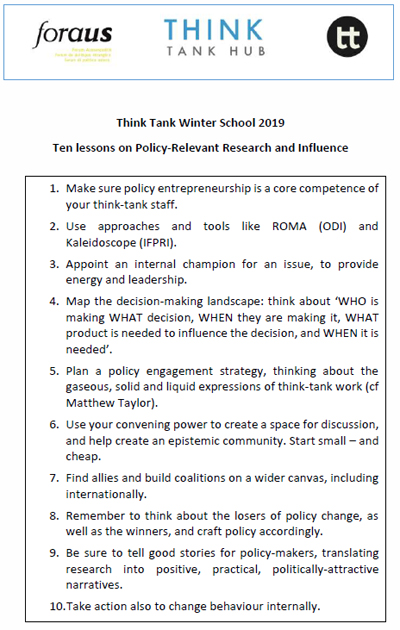