This piece was written jointly with Mikaela Gavas and first published on www.international-development.eu

Have the Parliament's guns been spiked?

Elections to the European Parliament will take place in May this year. New MEPs will have to exert influence in subtle ways. We propose eight initial tests of the manifestos.

On the face of it, this should be a really important moment in international development: decisions made this year will directly affect whether the EUEuropean Union will be able to live up to its commitment to sustainable and inclusive development, as well as its potential as a leading player on the international stage.

Under the Lisbon Treaty, the Parliament acquired new powers, which it has not been slow to use (Box 1). For the first time, the main political groupings in the Parliament are planning to nominate candidates for the Presidency of the Commission, an innovation which proponents hope might amplify the impact of every vote cast among the EU's 28 Member States.

Substantively, this is an important moment too. The elections will be held against the backdrop of immediate international crises: from the Central African Republic and South Sudan, through to Syria. The new Parliament will have an immediate role to play in helping set the new development framework for post-2015, and in helping the world reach a deal on climate change (there will be a sequence of summits and high-level meetings on these topics, coming to a head at the end of 2015).

On the other hand, it is not quite clear yet how well the pan-European political process will actually work. The main political groups' manifestos are not available yet. Last time, there was broad strategic consensus between them on aid and development issues.

Furthermore, even if there are differences between the pan-European party manifestos, it is far from clear how faithfully these will be reflected in the manifestos of member parties in the Member States.

There is also a possibility that the entire election will be dominated by weariness following the euro zone crisis, or general scepticism about the EU.

An oddity of the European elections is that they are out of sync with the main policy and budgetary processes of the EU. Remember that the EU's Multiannual Financial Framework (MFF) was approved at the end of 2013 , appropriating funds and shaping detailed allocations for the period 2014 to 2020. Detailed policy will be shaped by the Regulations covering different instruments, relating to the same period, and mostly in the final stages of approval. From an aid perspective, country programming is well underway, which means that the strategic priorities and sectoral aid spending up until 2020 will be fixed before the elections take place. The Foreign Affairs Council of Member States, meeting in December 2013, agreed the future policy on financing development and on policy coherence for development, and laid down markers for the Commission's future work on results frameworks in aid spending. Meanwhile, work is well underway on the EU's position for the climate change talks and on its comprehensive approach – linking development, defence and diplomacy – in conflicts like those besetting parts of sub-Saharan Africa.

Does this suggest that the role of the new Parliament is limited; that all that is left is the job of holding the executive to account for the implementation of decisions taken by others? Have the Parliament's guns been spiked?

Up to a point, perhaps. But there remain important powers and opportunities for the new Members of the European Parliament (MEPs).

Opportunities for a new Parliament

First, the European Parliament has an important role to play in the approval of the next EUEuropean Union leadership team.  As soon as the MEPs come to office, they will need to elect the new Commission President, followed by an intensive hearing process with each Commissioner, culminating in a decision on whether or not to approve the entire new Commission, as well as the new High Representative/Vice President of the European Commission (HR/VP). The timeline of this process is set out in Box 2 (below). 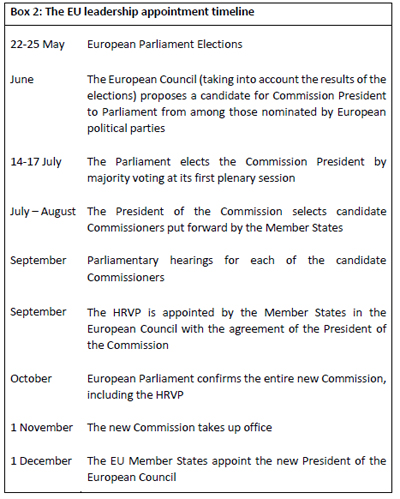 Second, holding the executive to account is not a trivial task. In addition to its role in budgetary control, the European Parliament has frequent hearings and exchanges of views with European Commissioners, the HR/VP (who is required to appear before the European Parliament's plenary session six times a year) and newly appointed Heads of Delegations and EUEuropean Union Special Representatives.

On spending, Parliament does not appear to carry out a formal review of the European Commission-prepared annual report on development and external assistance policies and their implementation. It should. In the meantime, however, the Ep will want to monitor performance. In addition, there are now no less than three development spending benchmarks that have been set in the new Development Cooperation Instrument (DCI): 27% of the 'Global Public Goods and Challenges' thematic programme on climate change and environment objectives; 25% of the thematic programme on social inclusion and human development; and 20% of the entire instrument on health and education.

Third, even on those items agreed, the legal process provides for parliamentary input. The details are not entirely clear, but the European Commission and the European Parliament agreed to a process of 'strategic dialogue' on the DCI which gives MEPs the right to exert ex-ante political control on the objectives, priorities and allocations included in Multiannual Indicative Programmes before they are adopted.Given that the rollout of country programmes is expected to continue beyond May, MEPs will have a role in scrutinising aid programming this year and during the mid-term review process.

Fourth, there are review processes built into the financial frameworks. In negotiating the 2014-2020 MFF, MEPs wanted to ensure that the newly elected Parliament and the new European Commission would have an opportunity to shape the budget.So, by the end of 2016 at the latest, the Commission will present a review of the current MFF's functioning, accompanied by a legislative proposal for a revision of the regulation. Furthermore, in 2016, country programmes and aid allocations will undergo mid-term reviews.

Fifth, there will be issues that have not been fixed. These include normative frameworks (e.g. post-2015), parliamentary requests for legislation (e.g. on EUEuropean Union donor coordination), and own initiative reports (e.g. on the European Year for Development in 2015).

Sixth, there will be preparation for the future, including: the next MFF (the Commission proposal is due by 1 January 2018); a successor to the Cotonou Agreement between the EUEuropean Union and the ACP; and discussion about the possible budgetisation of the European Development Fund (EDF).

Seventh, there will be a whole series of 'events' to which Parliament will have to respond, including human rights issues, humanitarian crises, election monitoring, etc..

Eighth, there are other institutional opportunities for influence, such as the ACP-EU Joint Parliamentary Assembly.

All this implies that being elected to the European Parliament is not a passport to powerlessness, but an opportunity to exert influence in various subtle ways. MEPs – and the parties they represent – will have the opportunity to exercise legislative, budgetary and supervisory powers, and to manage relations with national parliaments.

The need for a transformatory approach

To what end, then, should influence be exerted?

The initial response is that the main priority of the Parliament will be to support effective and efficient use of aid money, ensuring that programming and delivery adhere to global principles of aid effectiveness and the EU's own commitments in this area. Key principles include:

The EUEuropean Union has also made a major commitment to focus aid on the countries that need it most, reducing bilateral aid to middle-income countries (except those in the EU's neighbourhood).

The 2014-2020 MFF has committed as much as €51.4 billion to external assistance. The EDF will provide an additional €30.5 billion. The Member States, acting through the Council, have strongly encouraged the Commission to focus aid on concrete results. The Parliament will have a key role in monitoring progress.

Traditional aid, however, although necessary, is not sufficient, for two reasons.

First, the financing landscape is changing rapidly. The poorest countries do still need traditional grant aid, but there are only 36 on the current World Bank list. More countries are beginning to emerge from their dependency on aid. There is also increased focus on developing countries' ability to raise tax domestically, or to access international capital markets (see for instance the recent Commission Communication on financing for development). A new finance agenda requires the EUEuropean Union – and hence the Parliament – to engage more seriously with issues related to global financial stability, banking regulation, the investment policies of the private sector, taxation and capital flight. The core discussion of the G20 on these issues, for instance, is of prime development concern.

Secondly, the scope of development is much wider than merely aid. The EU's most recent report on Policy Coherence for Development, endorsed by the Foreign Affairs Council in December 2013, covered such areas as trade, migration, agriculture, energy, fisheries, agriculture, climate change and security. Decisions on these matters taken in Europe have an impact in developing countries. For example, the biofuels mandate, designed to increase the share of renewables in the EU's energy mix, has been criticised for leading to higher food prices in developing countries.

The implications of this wider remit for development cooperation policy and practice are transformatory. Similar conclusions were reached at an EU Change-makers' conference in June 2013. The meeting concluded that EUEuropean Union development cooperation will need to be transformed to remain relevant: 'relevance in the future', it was suggested,  'will require high-level skills in brokering global deals, better use of financial instruments, improved partnerships, and effective joining up across policy domains'.

Challenges for the European institutions

Many MEPs recognise the need for a cross-cutting perspective. They are handicapped, however: first, by the timing of decision-making, which, as noted above, remains out of sync (although there are plans to bring parliamentary and budget cycles together); and, secondly, by the way the Parliament's work is organised in single issue committees (though committees are able to offer opinions on each other's work). This is not unique to the European Parliament, as many national legislatures are similarly organised.

This problem also arises in the Commission, and in relations between the Commission and the European External Action Service (EEAS). The EEAS was reviewed in 2013. It remains to be seen whether the HR/VP will be given greater responsibility over different external portfolios – and whether the incoming HR/VP will have the time and ambition to be more active in that regard than the current incumbent, Baroness Ashton.

What to look for in manifestos

There is substance underlying all these points: what should the position be on migration from developing countries, for example, or what emissions targets should the EUEuropean Union adopt? It is not our purpose here to suggest what commitments should be made, either in the Europe-wide manifestos, or the plethora of national documents which will accompany them, and which will probably have greater prominence in the election campaigns.

There are, however, some questions than can be asked of all manifestos.