This is a bad-tempered complaint about ambiguity in European policy-making. Some will argue, following Henry Kissinger, that constructive ambiguity is the trick that conjures consensus where only disagreement exists. Others, following the literary critic William Empsom, will argue that seven types of ambiguity enrich our reading of the text. Hm. I doubt that William Empsom, eminent though he was, ever had the pleasure of studying a European Union communiqué. Although, actually, he did not die until 1984, so who knows?

My particular beef is the process that produces policy in the EU, where ‘policy’ means strategic direction rather than legislation. My case study is the policy on trade and development, prepared and completed in the first quarter of 2012.

This is how I thought the process worked. First, the Commission produces a policy paper, called a Communication. This is then discussed by Member States, and eventually by the Council, which issues Council Conclusions. The Council trumps the Commission, so the Conclusions become the policy. Note that the European Parliament is not involved at all in this process, since it has rights only over legislation and not over policy.

What happened in the case of the new policy on trade and development?  On 27 January 2012, the European Commission published a Communication on ‘Trade, Growth and Development: Tailoring trade and investment policy for those countries most in need’. On 12 March, this was discussed in the Council, which adopted Conclusions on the subject.

The Communication is about 20 pages in length. It is the first on the topic since 2002, and is intended to set out a direction of travel for the next decade. The table of contents is reproduced in Figure 1. The paper (a) reviews changes in the world (‘the great reshuffle’), (b) summarises what the EUEuropean Union has achieved over the past decade in terms of trade and investment policy with respect to developing countries, and (c) lays out an agenda to 2020 or so, for the EUEuropean Union itself and within the multilateral context. There is also a short section on what developing countries must do. 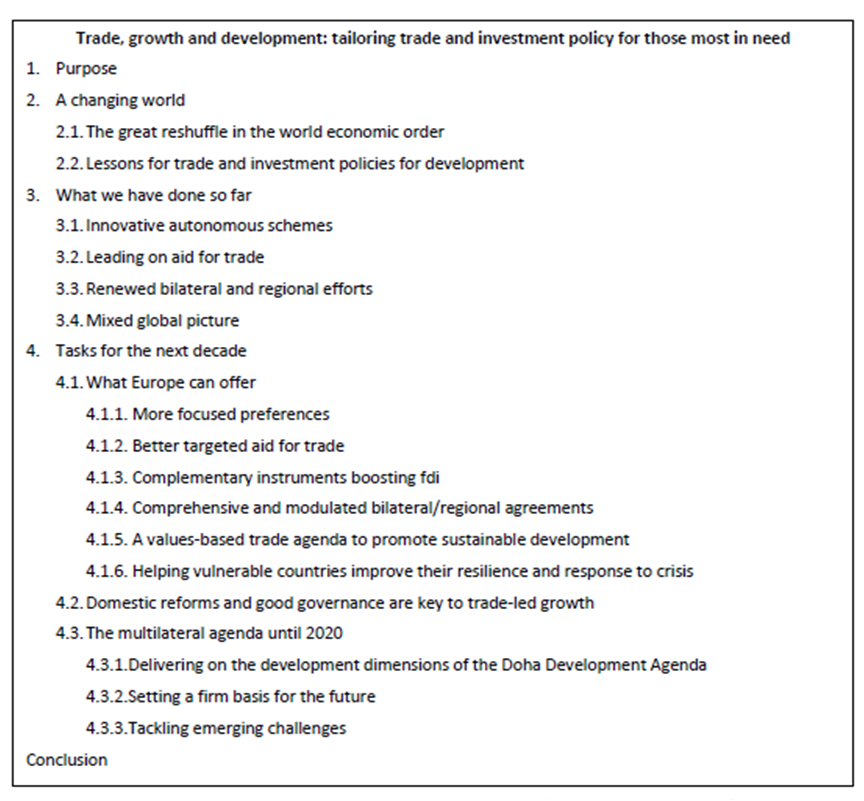 The Council conclusions are altogether more flimsy. The 3 page text is reproduced here. It consists of 34 short paragraphs, each of which begins with a verb. The Council, we learn, recalls, recognises, acknowledges, emphasises, and even welcomes (twice). Nowhere does it agree, approve, instruct, mandate or otherwise decide; or, come to that, disagree or not approve.

Those of us outside the magic circle are then left with the tedious, tedious task of trying to work out which statements in the original Communication have been picked up by the Council and which have not, and which new ideas have been inserted by the Council. How are we to interpret changes of emphasis between the two texts? Which text, we wonder, is the real policy; and, equally important, which text do the various EUEuropean Union institutions think is the real policy? You might expect that the Communication would be rewritten following the Council discussion, and issued as a final version of the policy: no such luck.

We have struggled with this problem in the past, for example with respect to European Commission proposals on the Millennium Development Goals, back in 2010. Mikaela Gavas and I found then that the Council accepted many proposals from the Commission, but omitted others and added some points of its own. Quite often, in these exercises, the Council scales down Commission ambition, especially with regard to oversight and coordination by the Commission.

Others have also struggled with this issue. In 2008, the UK House of Commons European Scrutiny Committee carried out an enquiry ‘into the arrangements for the preparation, consideration and approval of the Conclusions of the European Council and the Council of Ministers’ and the role of different institutions, including the Commission. It concentrated mainly on the question of whether draft Conclusions and the detail of Council discussions are in the public domain or not, but it also contained various (and not entirely consistent) comments on the legal status of Council Conclusions. Thus, the Committee itself opened its report by saying that

‘The Conclusions of the European Council are politically binding on the Member States and have a major influence on the direction of ECEuropean Community and EUEuropean Union business.’ (para 1)

It went on to report as follows:

Annex I of the Presidency Conclusions of the Seville European Council (21-22 June 2002) set out “rules for organising the proceedings of the European Council”. Paragraphs 12 and 13 say: “The conclusions, which shall be as concise as possible, shall set out the policy guidelines and decisions reached by the European Council, placing them briefly in their context and indicating the stages of the procedure to follow on from them. (para 6)

Note especially the wording that the Conclusions are ‘binding on the Member States’, but also that they ‘are not legally binding . . . but constitute a political commitment’. Which is correct? And are we to understand that Council Conclusions are binding on Member States, but not on the EUEuropean Union as a whole? On the Commission?

This is all very confusing, because the ‘European Council’ (composed of Heads of Government) is not the same as the Council of the EUEuropean Union (composed of ministers), with the two having somewhat different powers. The European Council sets political directions, whereas the Council of the EU is a pillar of the legislative system, alongside the European Parliament. It is obviously necessary to specify which Council is being referred to.

In the case of the trade and development policy, the key proposals for the next decade are contained in Chapter 4 of the Communication, and in paras 19-33 of the Council Conclusions – and note that ‘Council’ in this case refers to the Council of the EU. Table 1 contains an illustrative comparison – illustrative only, because it really is not the job of an amateur Kremlinologist sitting in Brighton to decode the inner workings of the Brussels institutions.

Table1: Illustrative comparison of Commission Communication and Council Conclusions on Trade and Development, 2012 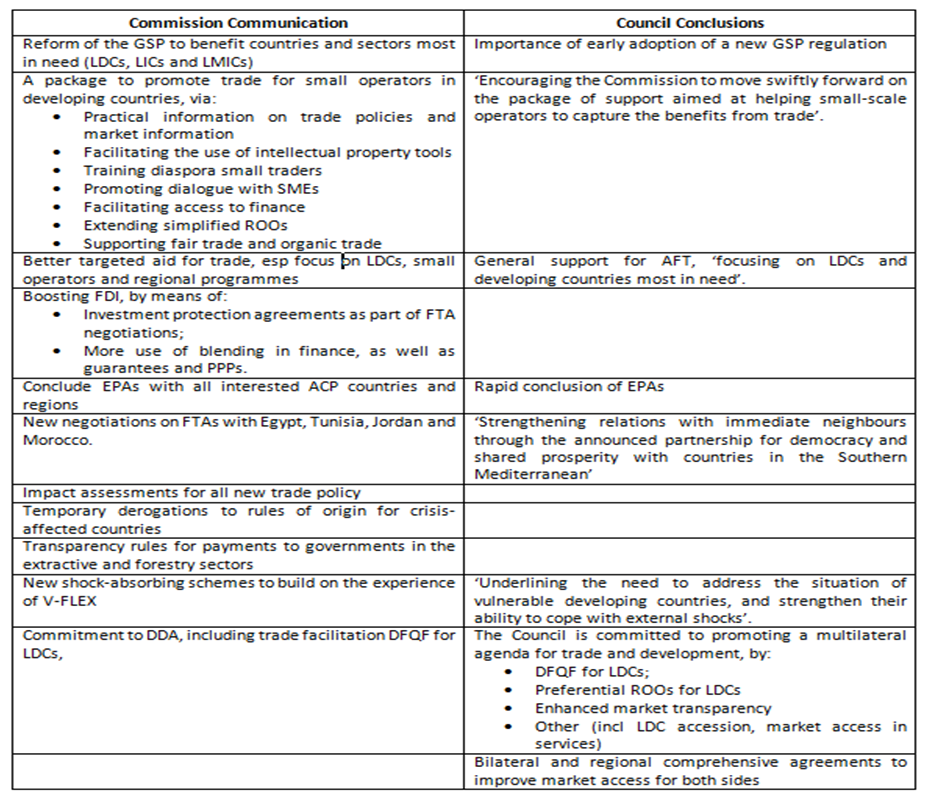 Frankly, it is really difficult to tell what has been agreed from the Communication and what has not. In some cases, the distinction may not matter because formal legislative proposals will have to work their way back through the system. However, this will not always be the case. In any case, the Commission presumably needs unambiguous guidance on what legislation to bring forward.

The problem lies partly with vocabulary, partly with lack of detail in the Conclusions, and partly is a matter of interpretation. For example, when the Council says that it ‘underlines the need to address the situation of vulnerable developing countries, and strengthen their ability to cope with external shocks’, does that amount to a mandate to extend V-FLEX, or does it not? And does the Council agree to temporary derogation of Rules of Origin for crisis-affected countries, or does it not? Sometimes, the Conclusions appear weaker than the Communication, sometimes stronger. For example, what does the Council mean by trade agreements which ‘improve market access for both sides’, given statements elsewhere about the dangers of accelerated reciprocity? Finally, what on earth does the Council mean by concluding right at the end of its Conclusions, that it ‘invites the Commission to provide a report to the Council on implementation of the communication and the follow up to these conclusions in 2015’? Does that mean that it accepts the communication? In which case, why not say so?

Remember, I am using trade policy as an example, not particularly as a matter for discussion in its own right. Trade policy may not be the most egregious example of ambiguity in policy-making.

There are only two possible explanations for this behaviour by the European institutions. Either some clever game is being played, in which interests are being served by ambiguity. It might be the case, for example, that the Commission does not really accept that it can be trumped by the Council, so maintains the Communication as its own policy, expecting to negotiate with the Council during implementation. Alternatively, it might be that policy-making is incoherent and incompetent. Personally, I think both are probably true – and equally unacceptable. Ambiguity can enrich our reading, as William Empsom showed. On the other hand, he defines one type of ambiguity in a way that resonates with EUEuropean Union policy-making: ‘two words that within context are opposites that expose a fundamental division in the author's mind’. Even worse, ambiguity can occur when ‘a statement says nothing and the readers are forced to invent a statement of their own, most likely in conflict with that of the author’.

It is not difficult to suggest what ought to happen: a draft policy should be issued by the Commission and re-issued in amended and final form when the Council has issued its Conclusions. Both the Council and the Commission need to behave differently. The Council needs to be much more concrete in approving or amending the policy, paragraph by paragraph, and line by line, using the right vocabulary to do so. The Commission needs to make sure it issues a final policy which incorporates the Council’s changes. And, by the way, the European Parliament needs to muscle in on this whole process and insist on accountability for policy.