Andris Piebalgs is playing poker with EUEuropean Union development policy – but, do you know what, there’s a mirror behind him, and we can see his hand. Furthermore, it’s not such a bad hand. Why doesn’t he just put his cards on the table and scoop the pot?

I don’t play poker, and maybe it doesn’t work like that. But when I read the new Green Paper on EUEuropean Union development policy, my first reaction was to say ‘take off the dark glasses! Put that cigar back in the ashtray! Raise the blinds! Come clean on what you want! And just do it!’.

The Green Paper is billed as a milestone on the way to a rethink of EUEuropean Union development policy, with proposals on ‘modernisation’ to be made in the second half of 2011. There are other milestones, including the new Green Paper on budget support, and policy papers on finance, climate change and other topics: watch the Commission website for details on papers and consultations.

There’s no problem with any of that. I’ve called previously for an updating of the EU Consensus on Development, and for better articulation of the Commander’s Intent in European Commission development policy. We talked quite a bit about updating the narrative of development policy in our European think-tanks report earlier this year, ‘New Challenges, New Beginnings’.

Note, though, the emphasis in the Green Paper on EUEuropean Union development policy, rather than European Commission policy – in other words, on what the entirety of the 27 Member States should do, rather than what the Commission should do on their behalf. I’ve run a word search on the Green Paper. The word ‘Commission’ appears only a dozen or so times, mostly in connection with where to send comments, and otherwise on steps the Commission proposes to harmonise Member State actions, for example through single EUEuropean Union Country Strategy documents or new Joint Strategies for Inclusive Growth.

This is not terribly surprising, but the Commission will be missing an important trick if it does not focus on its own policies and programmes. As I never tire of saying, the DAC multilateral aid report has shown that the Commission is the largest single supplier of oda in the world, bigger than the World Bank, and almost the whole of the UN. See the DACDevelopment Assistance Committee (of the OECD) diagram below. If the Commission wants to maintain that position when the next Financial Perspectives are set, and when the next EDF replenishment is agreed, then it’s time to start speaking with the authority it has earned, and focusing on the key issue of comparative advantage of Community action, rather than repeating its need to coordinate the Member States. And let’s not forget trade, foreign policy and climate, in all of which the European Commission has competence. We can argue for ever about cooperation versus consolidation, and I hope people will cast their votes on my new ‘swingometer’. However, none of us should forget that we are riding the largest bull elephant in the parade. For now. 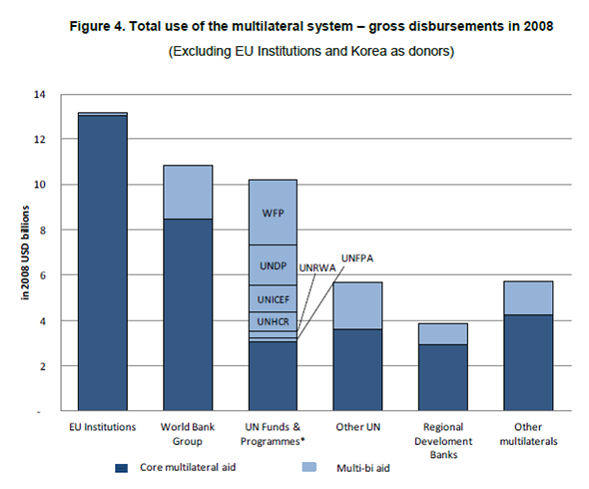 That was a digression. The central point is that the Green Paper is a bluff. There are words to satisfy every special interest, but the real intent is different. Readers can skip over the sections on the MDGs, social inclusiveness, security and even governance. They should not worry too much about the words on NGOs or development education or partnership. They can even pass quickly over climate change and food security. Instead, they should hone in on two sections: first, section 3.1, which deals with inclusive growth; second, section 4.2, which deals with energy and development.

How do we know these sections are important? Why, because Andris Piebalgs has told us so, in his letter to development ministers back in June, published on his personal blog. Among other things, he said then that

‘I would like to seek your help in refocusing EUEuropean Union development policy on jobs and sustainable growth in the developing world, on leveraging the aid spent, and on increasing the efficiency with which we grant aid.’

‘I believe that we need to consider very seriously how we can move from a grant-focused approach towards increasingly a blended grant and loan based aid policy, focused on using EUEuropean Union development funds to leverage investment in infrastructure in developing countries, and particularly Africa. For example, as I am sure you know, less than one-third of people living in sub-Saharan Africa have access to electricity, and many that do have such access have no reliable supply. . . Could we even work together, with our partners in the developing world, aid agencies and the EU’s energy industry, to aim that within two decades all global citizens have access to reliable and sustainable electricity?’

The Green Paper picks up these themes, with repeated references to leverage, catalytic impact, risk-sharing with the private sector, investment promotion, new technology and support to innovation. The growth section (3.1) makes a strong case for growth, emphasising decent work and social protection as the ultimate prize, and targeting investment, credit, regulatory reform and innovation as priorities for intervention. The energy section (4.2) picks up the same issues, with a special focus on Africa, and a list of issues which includes financing, regulation, technical training and regional integration of energy markets.

I am pretty sympathetic to this. The policy prescriptions are consistent with what has been learned from the Growth Commission, the work of the International Growth Centre, or even the G20 Development Working Group. It’s good to have decent work as a key objective. There’s already quite a donor track record on infrastructure, for example through DFID’s work on ‘Joining Up Africa’, and the commitment of multiple donors at the London event with that title in March 2010.

Others are better placed than me to comment on the detail. ODI, for example, has a whole team working on investment and growth, another working on business and markets. Organisations like REEEP, the Renewable Energy and Energy Efficiency Partnership, are sources of expertise on energy. The World Bank is only one of the international agencies withlong experience in this field. There is also substantial work underway on development finance, including the issue of blending grants and loans: development finance institutions have experience of using subsidies to support investment in infrastructure. There is not much in the paper on the international context, but that can also be remedied.

There are two wider issues we should also focus on. The first is what Andris Piebalgs might mean by ‘refocusing’. The second is what lessons can be learned for European Commission rather than EUEuropean Union comparative advantage.

On the first, it is hard to judge the implications for the European Commission’s aid spend, or for wider policy. The latestAnnual Report on European Commission external assistance, published in June 2010, shows about 10% of European Commission oda being used for economic infrastructure and services, including transport, communications and energy – just over €1bn in 2009, compared to nearly €4bn for social infrastructure, including health and education. I haven’t checked, but my guess is that this is a higher percentage than for the Member States. Does ‘refocusing’ mean a bigger share? In which case, how big? 15%? 20%? We are not given options in the Green Paper.

The second issue is European Commission comparative advantage. Historically, the Commission has been seen as having a comparative advantage with respect to infrastructure. Certainly, DFIDDepartment for International Development now spends very little in this area.  The latest Statistics on International Development show DFIDDepartment for International Development bilateral expenditure on transport and energy as being only £172m in 2009/10, from a total bilateral budget of £4bn, i.e. 4%. The case for the European Commission to lead needs to be made, however.  How do we know that the World Bank is not a better lead (including the IFC)? Or the African Development Bank? Would it make a difference if the European Investment Bank had a larger development programme? Or if there were more opportunities for blended finance in a European context? Again, it would be good to see some evidence-based analysis of this question, and some options.

To come back to the poker game, it will be a pity if discussion of the Green Paper does not focus on these two issues. A pity, too, if it becomes so concerned with the substance of how to deliver growth that the wider implications are missed.

There is, however, one final problem. Growth and infrastructure do not in themselves drive a new development policy or a ‘modernised’ European consensus on development. The issues are much wider – indeed touching on all the other topics mentioned in the Green Paper, as well as many others. But in my view, the Green Paper is not a good starting point for that discussion, and is ambivalent about whether it is really a growth paper, or the launch of a wider review. The Green Paper doesn’t say enough about future challenges, or about differentiation among developing countries. It doesn’t provide enough information about how aid is spent. And it certainly does not contain the discussion we would need of trade, finance, migration and other policies, which all need to play a part in a modernised EUEuropean Union consensus. We began to write that story in the think-tanks report, and it is one the Commission should pursue. But it requires a different Green Paper, and a different card game: not poker, next time, but something more collaborative. Here’s one I found on Google. It’s called Terra, and is described as follows: ‘The world is in crisis. Ecological disasters, socio-economic difficulties and diplomatic challenges abound - Will you be able to help your fellow players save the planet while balancing your natural desire to come out ahead?’. Sounds just the ticket. What a pity it is out of print!