Commentary on the Review of the EEAS

This note offers a commentary on the development aspects of the European External Action Service (EEAS) Review, published in July 2013. It is written jointly with Rapahelle Faure and Mikaela Gavas, and was first published on the website of the European Development Cooperation Strengthening Programme.

We argue that the development recommendations are credible, but incomplete. In particular, proposals to strengthen the role of the High Representative/Vice President of the European Commission ( HR/VP) and the EEAS should be accompanied by:

The European External Action Service (EEAS) was established in 2010 following a Council Decision (Council of the European Union, 2010) which prescribes the organisation and functioning of the service. According to the Council decision, the High Representative for Foreign Affairs and Security Policy/Vice-President of the European Commission ( HR/VP) should provide a review of the organisation and functioning of the EEAS by mid-2013. The review offers an important first opportunity to assess its strengths and weaknesses, to address some of its shortcomings, and to provide new impetus for its further development.

This commentary on the EEAS Review (which was published in July 2013) builds on other assessments of the EEAS’ performance, including ODI’s earlier analysis. It focuses particularly on the proposals in the Review that relate to development cooperation.

The establishment of the EEAS was motivated by the increasingly evident incoherence of European Union ( EU) external policy. At an institutional level, the EU’s external affairs were split between the intergovernmental Common Foreign and Security Policy (CFSP) and the European Security and Defence Policy (ESDP) on the one hand, and on the other, Community policies such as neighbourhood, development and external trade. These policies were developed independently of each other, resulting in weak coherence and coordination.  The rationale for the EEAS was to bridge all fields of EUEuropean Union external action: at the global and regional level, structurally and in decision-making.

From a development perspective, the EEAS was designed to play a role in shaping strategy and in programming development cooperation for all regions of the world. The stated intention was to improve the links between development and foreign policy and to combine the European Commission’s technical expertise with the Council’s political weight, thereby enhancing the EU’s global role.

Criteria for assessing the EEAS’ effectiveness

An ODIOverseas Development Institute (London) submission to the UK House of Lords inquiry into the EEAS in 2010 set four criteria for the EEAS (Gavas and Maxwell, 2010). The tests require the EEAS to:

Since 2010, the primary effort has been on the organisational establishment of the EEAS. The policy focus has been on foreign and security issues, such as in the Horn of Africa, the Sahel and the Serbia-Kosovo dialogue.

A report by the House of Lords on EEAS performance considers that ‘thus far, the EEAS appears to have brought no significant benefit to the EU’s handling of trade and development issues’ (House of Lords, 2013). The report acknowledges the advantages of using EUEuropean Union institutions in a coordinating function to achieve coherence among the EU’s Member States, but also accepts this is sometimes a fraught process. While the HR/VP is responsible for the overall political coordination of the EU’s external assistance instruments,2 the HR/VP has apparently not called a meeting of the Group of External Relations Commissioners (the RELEX Group)3 since December 2011 and ‘turf wars’ prevail between the HR/VP and other Commissioners. Official figures show that the few staff in the EEAS who work in development are concentrated in the Development Cooperation Coordination Division, the department set up in the EEAS to coordinate work with the European Commission’s Directorate-General for Development Cooperation (DG DEVCO).

Scope and findings of the EEAS Review

The EEAS Review makes a total of 26 short-term and nine medium-term recommendations and is structured around four parts:

The Review was prepared by the HR/VP and the EEAS. It takes the legal framework of the EEAS as given, including the double-hatted role of the HR/VP, and the institutional particularities of the EEAS, including its tri-partite nature with respect to the European Commission, the Council and the Member States.

Broadly, the proposals attempt to enhance the coordinating role and capacity of the HR/VP and the EEAS over EUEuropean Union external policies, including development cooperation, and to clarify the division of labour between the EEAS and the European Commission.

The Review's recommendations suggest that, to date, the HR/VP has mostly focused on fulfilling her tasks under her High Representative role and that a rebalancing should occur with an increased emphasis on her role as Vice President of the Commission. Nevertheless, the actual measures intended to enhance the Vice President role remain vague and unspecific.

How good is the EEAS Review?

In April 2013, building on earlier analysis, we concluded with eight recommendations for the EEAS review (Maxwell, 2013a). The recommendations aimed to address the shortfalls under each of our four tests (highlighted above). See the table below or find it here. The table compares our eight recommendations with the proposals put forward in the review and highlights the discrepancies and the gaps. 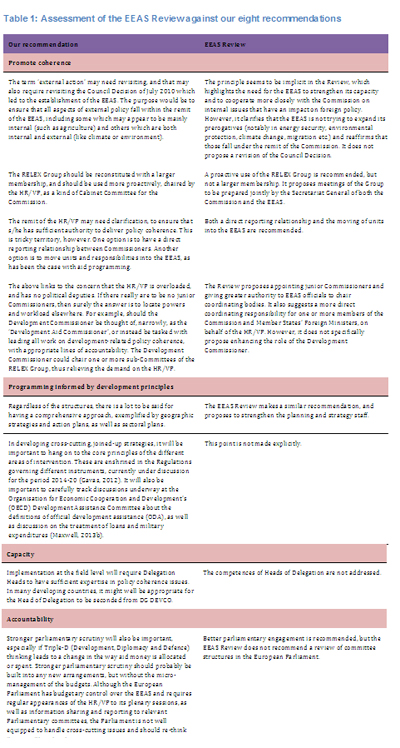 Most of the recommendations are taken up in the Review, albeit sometimes implicitly. There are some gaps, however. The Review says little about the obligation in the Lisbon Treaty to ensure that EUEuropean Union external action has a poverty focus. It does not mention the need to enlarge the membership of the RELEX Group. It does not specifically recommend strengthening the role of the Development Commissioner. It does not refer to the competences of EUEuropean Union Heads of Delegation in developing countries. Finally, it does not comment on the organisation of parliamentary committees.

Some of the omissions are perhaps not surprising, given that the Review is an internal report. However, they are not trivial, and indicate where the risks might lie.

Overall, the document offers a pragmatic vision for completing the establishment of the EEAS. For the most part, the recommendations stay within the boundaries of the Lisbon Treaty, making the suggested adjustments realistic. The Review also leaves some of the most difficult decisions – e.g. formalising the appointment of deputies to the HR/VP and clarifying the division of labour between the EEAS, DG Enlargement and DG DEVCO – to the next HR/VP and European Commission. While this will relieve the current HR/VP of difficult negotiations with other institutions, it should also ensure there is a sense of ownership for the next set of Commissioners and HR/VP in 2014.

Effective coordination and coherence of EUEuropean Union external action will continue to be the biggest challenge for the EEAS. As 11 EUEuropean Union Foreign Ministers argued in 2012, the aim is ‘to make the EUEuropean Union into a real actor on the global scene’.5 To do this, the EEAS will need to be at the forefront of negotiations on a wide range of external policy issues. It must play a key role in improving the EU’s internal coordination and the coherence of EUEuropean Union external action and instruments, as well as promoting a global development approach with a strong narrative on the challenges that need to be tackled. This will require the EEAS to enhance its capacity, knowledge and expertise in global development.

Maxwell, S. (2013a) 'Can the EUEuropean Union deliver joined-up thinking and action in international development? Eight steps for a better External Action Service', EDCSP Opinion, 24 May 2013.

2 See Article 9(2) of the Council Decision establishing the organisation and functioning of the European External Action Service, 2010/427/ EU.