Theses for the European Re-Formation

Theses for the European Re-Formation

In a lifetime roaming the world, Europe has been a binding thread.

An opportunity to reflect and reconnect.

First, we should not be leaving the EU, of course. It can be ponderous and inefficient, over-ambitious in its reach, misguided in its spending, and often better at policy proposals than actual change, but there are layers of culture and calculus underpinning our engagement with the institutions of the EU.

Second, it is hard not to be angry about Brexit. Angry with those who called the referendum. Angry with all those who failed to make the case to remain and reform. Angry with those who gave Brexit its prospectus and impetus. And angry with the EUEuropean Union itself, for the failings of the euro, the migration crisis, and the lack of democratic fizz. When we left the Pindus mountains, I read J’Accuse: it is time for a modern Emile Zola.

Third, we are still ‘European’ in geography and values. Article 2 of the Lisbon Treaty still acts as a signpost: ‘respect for human dignity, freedom, democracy, equality, the rule of law and respect for human rights, . . .  in a society in which pluralism, non-discrimination, tolerance, justice, solidarity and equality between women and men prevail.’ Don’t mention the backsliders.

Fifth, that means we must find new ways to collaborate with the EUEuropean Union – in trade, finance, security, climate, the movement of people, research. In the words of the Political Declaration that accompanies the Withdrawal Agreement, that means an ‘ambitious, broad, deep and flexible partnership’.

Sixth, who knows, one day we may rejoin.

In the meantime, though, what principles should guide us? What should the equivalent be of Martin Luther’s 95 Theses of 1517 (which I now learn, disappointingly, were probably not nailed to the door of All Saint’s Church in Wittenberg)? I can’t manage 95, but here are 27 ‘Theses for the European Re-Formation’.

On ethics and objectives

1. Article 2 of the Lisbon Treaty provides a guide: ‘respect for human dignity, freedom, democracy, equality, the rule of law and respect for human rights, . . .  in a society in which pluralism, non-discrimination, tolerance, justice, solidarity and equality between women and men prevail.’

2. The Sustainable Development Goals provide concrete expression of these ideals.

3. But the SDGs are a destination, not a road-map. Best to take them seriously, as has been said, but not literally.

On the development challenge

4. The development challenge is about more than plugging away at the SDGs.

6. That means rethinking development paradigms, as has been done in the past, for example (Structural) Adjustment with a Human Face.

7. The challenge for development leaders is to tread a path between neo-liberalism and populism of right and left.

8. Development cooperation is about hitting a moving target, and achieving the SDGs within countries and for all people, in poor and rich countries.

9. But that requires action also across national boundaries, to deliver regional and global public goods.

10. That is why multilateralism is essential to successful development action.

11. Aid is a vital instrument of development cooperation, but far from the only one. Finance, trade, migration, security, and climate action are all part of the development mix.

On the assets and advantages of the EU

12. Multilateralism is at the heart of development cooperation, and the EUEuropean Union is at core a multilateral organisation.

13. However, the EUEuropean Union is only one of many multilateral options open to development actors, so must always analyse its strengths, weaknesses, and comparative advantage.

15. The EUEuropean Union has global reach and global expertise.

16. But do not forget, the EUEuropean Union needs constantly to reform and renew.

On culture and calculus

17. An attachment to shared European values and enterprise play a big part in the commitment to the European Union. This is ‘culture’.

18. But self-interest also plays a role. This is ‘calculus’.

19. The European Union is most successful when it acknowledges both culture and calculus.

On UK-EU collaboration after Brexit

20. The UK is a world leader in development thinking and action, with a similar range of instruments to the EUEuropean Union and a similar geographical reach.

22. Partnership cannot mean one party subordinating its role or procedures or accountabilities to the other.

23. That means joint action on shared objectives – for example on climate change, fragile states, or growth in Africa.

24. Which might but probably does not mean merging programmes.

25. And does not mean that there will not be some competition, for example on investment opportunities in Africa. Instead the model is one of cooperative competition.

26. Underpinning future cooperation must be preserving the friendships and mutual understanding built up over many years.

27. So that one day, maybe, the route back will be unencumbered.

This is just a first list. I would like to crowd-source the next draft. Add your comments below. Or download a Word version of the Theses (here) and amend. Or just print what we have already in the form of a scroll (available here as an A3 pdf) and stick it in an undamaging and environmentally sustainable way to the nearest church or other public building. You can Tweet a photo of your work or post other comments. Use the Hashtag #Europeanre_formation. 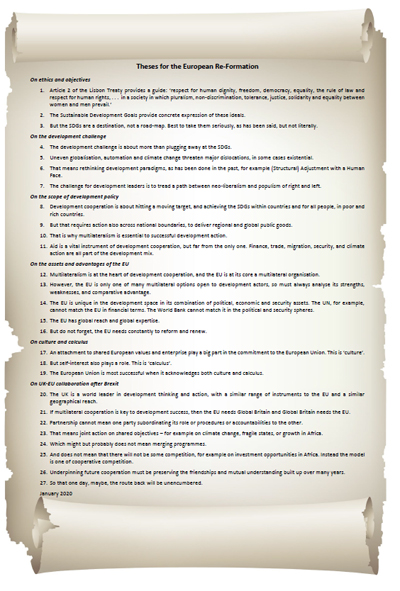 You can also download the emoji picture used above as a document (here) or A5 pdf (here).