This piece focuses on the Foreign and Commonwealth Office (FCO), which now manages about 7% of the aid programme. It focuses particularly on the Prosperity Fund (PF) and the Conflict, Stability and Security Fund (CSSF), and tackles six questions, viz:

There is no reason to doubt the competence of the Foreign Office, or its essential skills in dealing with the complex problems of fragile states. It does not have much experience of running programmes, but has recruited DFIDDepartment for International Development staff to do the heavy lifting. Nevertheless, decisions about the strategic objectives of development assistance, the allocation of funds, implementation, and accountability, all require high-level and unified Government leadership, as well as adherence to guiding legislative frameworks like the International Development Act. DFIDDepartment for International Development is well-placed to provide all those elements – and of course to benefit from the skills of the FCO, and make use of the National Security apparatus and the Foreign Office as implementing partners.

Where does the FCOForeign and Commonwealth Office fit?

Where does the FCOForeign and Commonwealth Office fit in overall spending? The answer is in Table 1, which shows the Department for Business, Energy and Industrial Strategy spending 5% of the aid programme, the CSSF over 4%, the Foreign and Commonwealth Office nearly 4%, and the Home Office nearly 3%. The Prosperity Fund accounted for another 0.3% in its start-up year. In fact, the CSSF, which is nominally managed by the National Security Council, channels nearly three quarters of its money to the FCO, and the Prosperity Fund some 90%, so the FCOForeign and Commonwealth Office now manages about 7% of the British aid programme, over 10% of the bilateral programme. That amounts to nearly £1bn a year, a number that is likely to rise as the Prosperity Fund scales up. 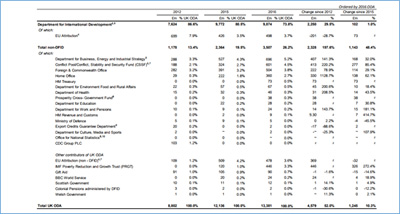 The changing roles in the management of UK aid were prefigured in the 2015 Aid Strategy, ‘Tackling Global Challenges in the National Interest’. This announced £1.3bn over 5 years for a new Prosperity Fund, to be led by the National Security Council, and an increase in funding for the CSSF, also to £1.3bn over 5 years. See here for my comments on the strategy.

A year ago, there was rather little information in the public domain about the Prosperity Fund (PF) or the CSSF, though DFID’s statistical publication did have information about spend on the CSSF. The PF, anyway, is new. This year, there is much greater transparency. In addition to the spend information in Statistics on International Development (Pgs 13 ff), both the PF and the CSSF have their own websites: here for the PF and here for the CSSF.

In addition, the National Audit Office (NAO) publishes regular reviews of the FCO; and the Independent Commission on Aid Impact (ICAI) has reviewed the PF and is in the process of reviewing the CSSF. The Parliamentary Joint Committee on the National Security Strategy reviewed the CSSF in a report published in 2017, and the International Development Select Committee took evidence on spending by other Government Departments in its review of the allocation of UK aid resources, also published in 2017: both expressed doubts about coherence, political leadership, management, transparency and accountability.

What is the exam question?

I don’t want to second-guess the reviews already undertaken or underway, but was asked to comment on the FCO’s engagement in the aid programme at the recent PwC conference on international development. I took the opportunity to try and focus the exam questions that policy-makers might try to answer.

To my mind, the exam question is not ‘Is it good to focus on big, cross-sectoral issues like peace and prosperity?’. The answer to that question is self-evidently ‘yes’: see my review of the Aid Strategy. Nor is the question ‘Is it good to have cross-ministerial collaboration in delivering international development?’. The answer to that question is also self-evidently ‘yes’, and has been for many years. Anyone remember Government-wide Public Service Agreements, which were a feature of Government policy-making from the late 1990s through to 2010?

If that is the case, the debate should not be about the changing development agenda, including the need to engage in fragile states or deal with the challenges of globalisation. Instead, it should focus on a different question, viz

‘Is it efficient and effective to have the FCOForeign and Commonwealth Office act as the agent to deliver (part of) big, cross-sectoral, cross-ministerial engagement?’

That question in turn resolves into six others, the focus of my intervention at PwC. The six questions are:

First, the focus of the PF is on issues that feature prominently across the aid programme, and indeed the UK Government’s overall policy on international development, including non-aid issues. Thus, the PF is described as providing ‘expertise and technical assistance in areas of UK strength to: promote economic reforms and remove barriers to trade; strengthen policy capacity and build strong institutions; and develop sectors which support growth such as infrastructure, energy, finance, education and healthcare’. This is mainstream for DFID, but also for the many multilateral bodies supported by UK oda, including the UN, the World Bank, the regional development banks, and the EU.

So, what is the Unique Selling Point? The PF is at pains to make clear that ‘all projects and programmes comply with the International Development Act including the International Development (Gender Equality) Act 2014, meet the OECDOrganisation for Economic Cooperation and Development Development Assistance Committee (DAC)’s criteria, are untied, and meet UK government transparency commitments on ODA spend’. That is all good, and mainstream. One source of deviation might be that the PF works in middle income countries, which it does, but so do the multilaterals.

A better answer is not evident on the PF website, but can be found in the ICAI review, which includes the following summary of the scoring criteria for PF bids, indicating that 25% of the weight is given to the strengthening of UK trade and investment opportunities (Figure 1). That is certainly not mainstream, and may well be thought controversial. Does it actually conform to the International Development Act? Probably it does, because the Act is rather loosely worded, specifying only (in Article 1) that ‘the Secretary of State may provide any person or body with development assistance if he is satisfied that the provision of the assistance is likely to contribute to a reduction in poverty’. That allows for multiple objectives. But is there a trade-off for the PF, at the margin, between poverty reduction and UK trade and investment interests? 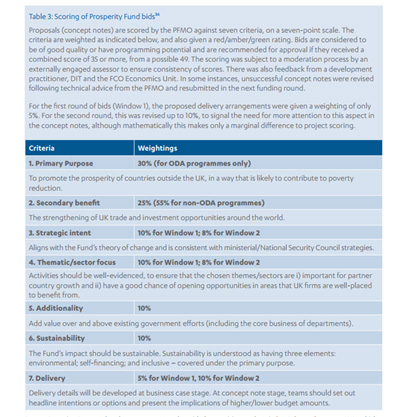 The CSSF is a more complicated case. This is because the CSSF appears to be less tightly bound by the provisions of the International Development Act (or at least does not reference it): the coverage of the Act with respect to Departments other than DFIDDepartment for International Development has always been ambiguous. In addition, there are many other options for delivering similar objectives. Consider, for example, that the UK supports, no doubt among others:

I can’t be absolutely sure, but my guess is that funding for all of these comes from DFID. Now, the CSSF is owned by the National Security Council, but DFIDDepartment for International Development is involved in its management (Figure 2). So how is the coordination of all these different delivery options managed? At what level in the hierarchy? Where is it reported? And which Secretary of State has final accountability? For example, do all the above multilateral funds receive less money because the UK has increased its bilateral (and earmarked) budget? And does that contribute to greater effectiveness on the ground?

Governance and accountability of the CSSF 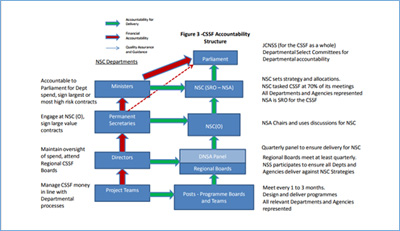 Note that this question about the bilateral-multilateral choice does not obviate the possibility that all CSSF spending classified as oda is pro-development. Answering that question would require more detailed analysis of the CSSF Annual Report and of project reports The overall balance of spending (Figure 4) and the geographical distribution (Figure 5) look broadly plausible, remembering especially that not all CSSF funding is intended to be oda: in 2016-17, in fact, only slightly under half of total CSSF spending was oda. But this is worth more detailed review. 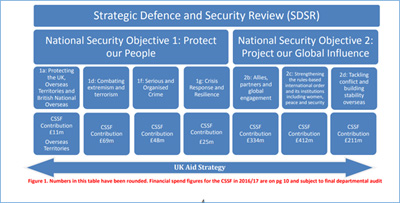 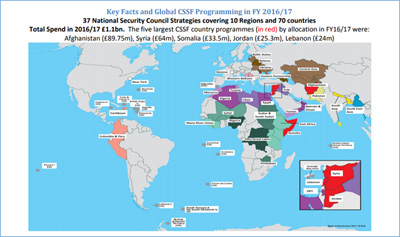 On tying, it is notable that the Prosperity Fund is explicitly untied (good), but that the CSSF makes no such commitment. It would be interesting, for example to market test the provision of oda-eligible services provided by the UK military. Readers with long memories may remember the fight between Clare Short and other ministers about the cost of UK helicopters used for flood relief in Mozambique in 2000.

Turning to the question of excessive earmarking, the PF and the CSSF are just two examples of the creation of free-standing funds. The number of these has proliferated in recent years. Others include the International Climate Fund, the Global Challenges Research Fund, and a number of specialised health funds, like the Ross Fund for infectious diseases and the Fleming Fund on drug resistance. Each of these may be worthwhile on its own terms, but the proliferation reduces flexibility in central programming and makes the UK aid programme notably less agile – and possibly less responsive to recipient country needs. There is a literature on earmarking aid (for example here and here), largely hostile. The United States is often cited as an egregious case: the DAC peer review in 2006, for example concluded that

‘Congress itself is viewed widely as limiting the efficiency and flexibility of American aid because of the cumulative impact of its extensive earmarking of funding allocations and other directives.’

The most recent peer review, in 2016, concluded that

‘the system is still marked by . . .  a myriad of initiatives and budget lines, a difficult authorising environment and overly complex procedures. This places the system under strain and presents a risk to effectiveness overall.’

Similar debates have arisen elsewhere, for example in designing the EUEuropean Union aid framework. For its 2007-2013 multiannual financial framework (MFF), the EUEuropean Union replaced 30 programmes and 90 budget lines with eight development instruments, creating a structure that has largely survived in the current framework.

It should surely be an objective of UK development policy not to move in the opposite direction.

Finally, on the question of multiple actors, the UK has been unusual in having a single agency, in this case a Ministry, responsible for all aspects of development aid, including multilateral and bilateral, as well as development and humanitarian. In many countries, multilateral contributions, for example to the World Bank and the EU, are handled by the Ministry of Finance, leaving the development agency with restricted command over the totality of aid.  In the US, the 2016 DACDevelopment Assistance Committee (of the OECD) peer review noted that

‘With over 212 government agencies implementing foreign assistance, ensuring coherence and complementarity rather than competition, remain a challenge.’

There is also a question of accountability. It is notable, for example, that the International Development Select Committee has found itself hampered in overseeing all UK aid. When it examined the question of policy coherence in 2015, the National Security Council refused to give evidence. The Committee concluded that

I concluded my presentation at the PwC event by saying that I was instinctively opposed to both greater earmarking and the proliferation of new primary agents. I don’t think this reflects merely a sentimental attachment to DFID. Decisions about the strategic objectives of development assistance, the allocation of funds, implementation, and accountability do require high-level and unified Government leadership, as well as adherence to guiding legislative frameworks like the International Development Act. DFIDDepartment for International Development is well-placed to provide all those elements – and of course to benefit from the skills of the FCOForeign and Commonwealth Office and to make use of the National Security apparatus and the Foreign Office as implementing partners.