Prosperity and Justice: A Plan for the New Economy

Prosperity and Justice: A Plan for the New Economy

In 1994, the Institute of Public Policy Research (IPPR) published the final report of its Commission on Social Justice: ‘Social Justice: A Strategy for National Renewal’. It became the playbook for the Labour Government which took office in 1997. This year, the Institute, which describes itself as the UK’s pre-eminent progressive think tank, has published the final report of a new Commission, this time on Economic Justice: ‘Prosperity and Justice: A Plan for the New Economy’. Will it be as influential? More important, will it be proved right?

My perspective is that of international development, so mostly I leave to others dissection of IPPR’s analysis as it applies to the UK – except when I don’t. The latest edition of The Progressive Review (autumn 2018) is a good place to find a debate. I need to say on my own account, though, that, from an international perspective, there is much to admire and learn from in the report. However, there are two missing chapters. These are, first, how change in the rest of the world will affect prospects for the UK; and, second, the agenda the UK should pursue externally. To my mind, the IPPRInstitute for Public Policy Research (London) Report is somewhat insular.

Critique apart, the report offers many ideas for the national development strategies of developing countries. Indeed, the analysis and recommendations are wide-ranging and often intriguing. Many of the prescriptions will be familiar: an active industrial policy, for example, supporting innovation; green growth; industrial clusters; decent work; agency and voice for workers; a National Investment Bank; a sovereign wealth fund; action to tackle inequalities; decentralisation . . .  There are also some interesting ideas which are less familiar: the definition of ‘the good economy’; the need to ‘hardwire’ economic justice into policy; integrating supply- and demand-side interventions; creating new social partnerships in the ‘partnership economy’. It is also striking that the Report talks about the 2020s as the ‘decade of disruption’.

What does the Report say?

The Report consists of 15 chapters. The first five set out the diagnosis and describe a new vision. The next ten describe a ten-point plan.

The diagnosis is of an economy that has a few world-beating sectors that offer innovation, high productivity, strong exports, highly skilled jobs and good pay, but overall suffers from slow growth, low investment, poor productivity, inadequate R and D, and a large trade deficit in goods. The financial sector is fine, as are aerospace, motor manufacturing, tech start-ups and the creative industries. Everyone else is in trouble, especially in the ‘lived economy’, where employment is poorly paid and precarious, the returns to labour are declining as a share of national income, and inequalities of all kinds are high and often rising – whether regional, gender, ethnic, or just in income and wealth.

A new approach begins by redefining prosperity and setting out a vision of economic justice. Prosperity is not just about income and wealth, but also a place in the economy, autonomy, voice,  the opportunity to learn, access to public goods like health and education, and trust in public institutions. Thus, economic justice can be thought of as having the following characteristics: no-one lives in absolute poverty; everyone is treated with dignity in economic life; there is no systematic or institutional exclusion; there are narrowing inequalities of wealth, income and power over time; no places are left behind; and the future is looked after as well as present. There is a Box which describes the ‘good economy’ (Figure 1). 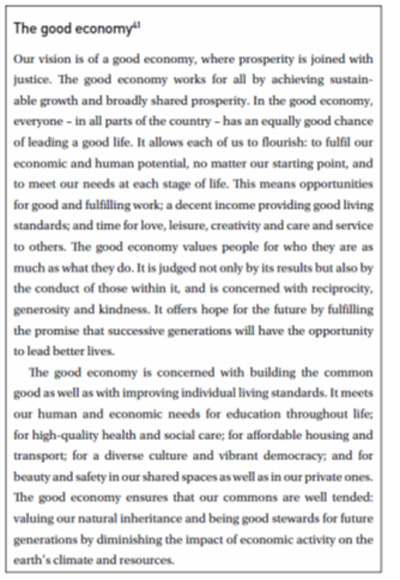 How can economic justice be hard-wired into the new economy? There are ten points:

A chapter is devoted to each of these, containing both analysis and prescription. There is a total of 67 recommendations, ranging from the creation of new statutory bodies to reform of the tax system and many measures to empower workers and strengthen unions. The recommendations are more easily read in the separate Executive Summary than in the main report. It is a pity there are no Infographics which pull it all together.

What to make of the Report?

It is tempting to trace the analysis and recommendations back to individual participants: Mariana Mazzucatto on innovation, for example; Frances O’Grady on unions and worker empowerment; Michael Jacobs on climate; Mustafa Suleyman (co-founder of Deep Mind) on AI and automation. Whatever the source, there is a lot here, a rich menu of policy options.

As a general observation, though, the report can be read (was read by me) mainly as a report about manufacturing, based on an explicit call to rebalance the economy. That justifies the emphasis on industrial clusters around universities, better targeted support to R and D, better access to ‘patient capital’, improved competition policy, reformed corporate governance, strengthened regional policy, and investment in skill development. The other elements, including personal taxation, asset redistribution and macro-economic frameworks kind of fit around this. The Report explicitly eschews any analysis or recommendations on welfare policy.

It seems a pity that other sectors, some in the long tail of poorly performing businesses, and some not, are not treated with the same enthusiasm. What do the arts need, for example, to continue their upward trajectory? Or come to that, the non-banking financial services industry, especially if the UK leaves the EU? How about the retail sector, languishing as the High Street erodes? Or health and care? Or tourism?

Those questions matter, because it is not axiomatic that manufacturing is the answer to the UK’s multiple problems. Will a high-tech, automated manufacturing revival really deal with problems in the labour market, let alone with great regional disparities? Will a focus on tradeables (including bundled services) solve the Balance of Payments problem? The case is not made. Nor are the linkages fully explored between manufacturing revival and non-manufacturing prosperity, for example in seaside towns. Will Blackpool receive a leg-up if the Northern Powerhouse succeeds?

This brings us to the first of the two missing chapters, the one dealing with the rest of the world. Despite a warm endorsement in the book from Dani Rodrik (‘bold’, ‘an inspiration’), there is little evidence that his views on premature deindustrialisation have had much influence. Nor is there much engagement with the reshaping of trade patterns by Global Value Chains (see Baldwin), or the long term problem of manufacturing employment (see the World Bank Report on Trouble in the Making, which examines the challenges of the 4th industrial revolution). See my review of Trouble in the Making for a discussion of all these issues. Of course, the issues are seen in the work cited from the perspective of developing countries, but many similar considerations apply in the UK.

Changes in the world economy make the debate all the more pertinent. The IPPRInstitute for Public Policy Research (London) report is strong on innovation policy to support ‘missions’, like clean growth or future mobility, but does not discuss the fact that many other countries are engaged in the same process. Korea has been a long-standing example, for example in the area of green growth. China has a Made in China 2025 strategy, explicitly aimed at upgrading manufacturing capability in ten key sectors, including robotics, aerospace and clean-energy cars.

Does there not then need to be explicit discussion of how the world economy might change and what the implications might be for the UK? Rather than focusing so strongly on the problems of the British economy today, this might have been achieved by starting with what the world will be like in 2030 or 2050, and working back to the present day for the UK. Given the future trajectory of globalisation, the question may not be ‘how to emulate the success of the aerospace industry?’, but rather ‘how to prevent the aerospace industry going the way of so much other British manufacturing?’. Probably, there is no alternative to a mission-driven approach which builds capabilities and sustains UK manufacturing, but a global perspective would inject additional urgency into the debate.

The second missing chapter would deal with the agenda the UK should pursue externally. Despite the discussion of public goods nationally (health and education, as mentioned, but also clean air, the natural environment, security, culture, and so on), the issue of global public goods is missed. There are many examples of issues that could or should be on the UK agenda: more ambitious global commitments on climate change; free trade in services; intellectual property protection; banking regulation . . . One might have expected an IPPRInstitute for Public Policy Research (London) Report to have something to say about trade rules and policy space, for example on the issue of public procurement or the incubation of new industries. Some of these issues will become even more urgent if the UK leaves the EU. And what happens if UK negotiators are not successful, in Brussels and elsewhere?

None of this will be news to the Commission’s Director, Michael Jacobs, whose book with Mariana Mazzucato on Rethinking Capitalism is a treasured reference. There are further links to that work it would have been good to make in the Commission Report.

Nevertheless, the Report does provide a storehouse of ideas, many of which will be of interest to developing countries. The idea of a ‘good economy’ is attractive, including the emphasis on decent work: the idea of a Good Jobs Standard might be of interest, and the Scottish case of a Fair Work Convention. Many will also be attracted by the idea of reshaping the Macroeconomic Framework, and by the many proposals for employee participation and partnership: not just union membership and representation on Boards, but also cooperatives and mutuals.

At the same time, the UK can learn on all these topics from some developing countries. There is good experience of Sovereign Wealth Funds, for example, and on the use of public funds to crowd-in private investment, including through blended finance.