Loaded after Covid: priming policy for after the pandemic

Loaded after Covid: priming policy for after the pandemic

The pandemic has a long way to go, and there is little point trying to fine tune policy until it is over. This is an emergency with no time to think long term. The priority is to secure lives and livelihoods.

No-one knows how long the global pandemic will take to run through its first, second and third waves; nor what the final cost will be in terms of human life. There are many uncertainties. However, we can be pretty certain that the world will be

Many people think that the post-pandemic period could be a moment of opportunity for new sustainable development policies (economic, social, and environmental): see e.g. Helen Mountford from WRI. Others think this could be a moment to rethink capitalism – see e.g. Larry Elliott in the Guardian. But for any option, it is easy to think of the opposite as being equally likely: not more environmentalism, but less; not more global governance, but less; not more regulation of the market, but, eventually, less. See David Steven and Alex Evans on the risks to the existing world order. 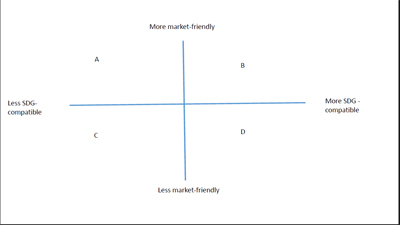 A: The unacceptable face of capitalism. A world of robber barons. Think the US before Theodore Rossevelt.

B: Capitalism with a human face. A world of liberal social democrats. Getting to Denmark.

C: The repressive state. A world of autocrats. North Korea? 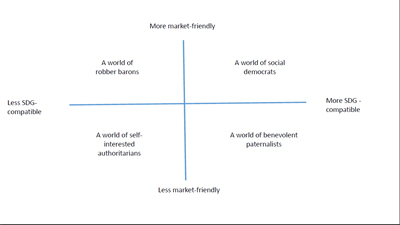 A: Trade rebuilds, role of the state in countries rolled back from pandemic levels. But countries are more self-interested and lack of resources means more short-termism. Not much interest in aid and development, except in a utilitarian context (stopping migration).

B: This is really back pretty quickly to the status quo ante (but NB from a wealth-reduced starting point). The WTO, the UNFCCC, the UN all back in business. Countries commit to the SDGs, at home and internationally.

C: is characterised by high levels of state involvement (in all ways, from ownership to regulation to state spending), probably with limits to individual freedoms, and in this case with not much interest in the SDGs, certainly internationally, and probably nationally as well.

D: has similar state involvement, and similar limits on personal freedom, but with policy committed to achieving the SDGs. A highly transactional relationship with multilateral institutions, however.

People will have different views on which of these is preferable. Probably those in our field would want to be on the right hand side. But there might be different views about the top and bottom. At the top, unrepentant globalisers and advocates of the free market. At the bottom, protectionists and advocates of nationalisation. New Labour versus Old Labour? Blair versus Corbyn?

The immediate task is to interrogate the structure of the scenarios, and change it if necessary, then to fill in the details of the different quadrants. At some point after that, value-driven (or maybe just evidence-based) positions have to be taken on what to do next in terms of policy, and when. Then there will be questions about how to get there – the psychological and behavioural drivers of change. On this, see Rebecca Nadin’s piece on the ODIOverseas Development Institute (London) blog.