Jobs in Africa: the role of a forward-looking food industry

Jobs in Africa: the role of a forward-looking food industry

The food industry offers great hope to African countries in need of jobs, but also presents the same countries, and their consumers, with risks. Consider the two syllogisms in Box 1, and ask what happens if they are both true. Probably, they are both true, up to a point. So, this is the conundrum food policy needs to solve. It can do so, combining the insights of a progressive industrial policy with those of the ‘new food policy’. A powerful framework can be discerned, for application globally and at country level. 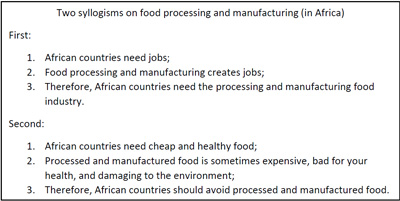 It is a commonplace to say that Africa needs jobs, and will need more in the future. It can be problematic to generalise about ‘Africa’, and the term ‘jobs’ needs to be approached with care in countries where the informal sector is the dominant source of livelihoods. But caveats aside, it remains true that Africa has a young and fast-growing population seeking work. The World Bank reports that ‘half of the population is under 25 years of age. Each year between 2015 and 2035, there will be half a million more 15-year-olds than the year before.’

Furthermore, the same report argues, even rapid growth in industrial wage and salary jobs will not absorb the growing labour force, because growth starts from such a low base: over the next decade, ‘the share of industrial wage jobs in total employment will rise only from 3 to 4.5 percent in Sub-Saharan Africa’.

This assumes that employment growth will continue. Recent work by the World Bank on technical change in manufacturing throws even that avenue of partial escape into doubt: see my review of the Report, ‘Trouble in the Making’. Two ‘stylised facts’ from that report are that

And this is before automation and the use of robots really kicks in on a large scale.

Thus, it is not surprising that youth employment has become subject to alarming commentary about a shortfall of 50 million jobs in Africa by 2040,  nor that it has become a political priority, for example at the recent AU-EU Summit, which had youth employment as its principal focus.

Now, I argued in my review of Trouble in the Making that the linkages between agriculture and agro-industry were poorly conceptualised, and that there might be more potential in the food industry than is implied by the rather dismissive phrase ‘commodity-based regional processing’. A similar lacuna can be inferred in a recent book on structural change in developing economies, edited by McMillan, Rodrik and Sepuldeva. In this case, the main potential for economy-wide growth is seen as being shaped by the speed with which resources can be transferred from the ‘traditional’ sectors (=agriculture) to the ‘modern’ sectors (=manufacturing).

Of course, it is true, as frequently observed, that just because a country has a comparative advantage in producing, say, cocoa, it does not necessarily offer the conditions for a successful competitive industry producing chocolate. Nevertheless, and especially given rapid urbanisation and changing food tastes, it is logical to think that food processing and manufacturing can help create jobs in Africa.

That is certainly the case in developed countries. In the UK, for example, 3.9 million people are employed in the agri-food sector, accounting for 13% of all jobs in the economy. Of these, only about 400,000 are in farming and fishing or in upstream industries.   Thus, only about one job in every ten in the agri-food industry is related to primary production. Killer fact: even as long ago as 2000, there were apparently more people in the UK working on the production lines that produced packaged sandwiches for sale in supermarkets than there were working in agriculture. The sandwich industry is worth £8bn per year. Two companies produce half of total output, as many as one billion sandwiches between them.

Industrialisation of the food industry is not untypical. Figure 1 below, again from the World Bank, shows that the share of food manufacturing and food services grows rapidly as per capita income increases.

For a specific example, see Vietnam, where

‘the GDPGross Domestic Product share of primary agriculture is expected to decline over the coming two decades, perhaps by 0.5 percent per annum. By the early 2030s, primary agriculture will then account for some 8–9 percent of Vietnam’s GDP. However, agro-industry, together with food distribution and logistical (and other) services could account for nearly double this share (15 percent of GDP). This means that the agro-food complex will still account for one-fourth of total GDP.’

Given this context, it is natural that the food industry should be a focus of discussion about economic development and jobs in poor countries. Indeed: UNIDOUnited Nations Industrial Development Organization has a programme called 3ADI (the African Agribusiness and Agro-Industry Development Initiative), part of a wider programme on agribusiness and rural entrepreneurship development) - and see a book from 2011, edited by Kandeh Yumkellah, on Agribusiness for Africa's Prosperity; FAOFood and Agriculture Organisation of the United Nations has just published work on agro-inustry for development (see e.g. here and here); AGRA made the business of smallholder-led value chains the theme of its 2017 African Agriculture Status Report; and the World Bank has recently publsihed a monograph on Shaping the Food System to Deliver Jobs. IFPRI has made important contributions to the debate, for example in successive Global Food Policy Reports; for Africa, see especially work led by Ousmane Badiane (see e.g. here)

Each of these institutions has its own approach, but they share a concern for both an enabling framework and sector specific interventions to create productive and job-generating value chains. For example, the World Bank jobs report has a summary of its policy prescriptions, as in Figure 2. AGRA has a specific focus on small farm transitions. And so on. All are optimistic.

Winners and losers in an industrialised food system

So, what is the problem?

First, there are issues related to industry structure, especially concentration and the concentration of power, both nationally and globally. This is a recurrent theme of critics like Tim Lang in Food Wars, or of the Fair Trade movement, or as in the Oxfam campaign, Behind the Brands, which scores the ten largest global food businesses on the quality of their supply chains.

The largest food companies are, indeed, very large. In the UK, for example, one supermarket chain, Tesco, has a turnover of over £50bn per year (admittedly not all on food) and has a 28% share of the UK grocery market. On the other hand, the most recent enquiry into the grocery sector by competition authorities in the UK, in 2008, found that competition is ‘effective and delivers good outcomes for consumers’, albeit with problems in the relationship between supermarkets and their suppliers.

For the future, this industry is as susceptible as others to the labour-displacing impact of technical change and increases in scale: Google Inside the Factory, a series of TV programmes available on Youtube, to be amazed by the sophistication and high level of supply chain integration of food manufacturing in the UK; or see these articles on the use of robots in production (here, here, here and here) or distribution (here).

Second, though, it is important to ask whether the food industry serves consumers and society more generally. Obviously, the term ‘food industry’ covers a wide range of enterprises, from cafes, restaurants and street food outlets, through to giant food manufacturing plants.  Some actors are no doubt unexceptionable, and it is certainly true that individual companies are giving higher priority than before to social and environmental issues.  Tesco, to continue with the same example, and without necessarily endorsing the adequacy of their performance, report regularly on a range of commitments: Figure 3 is from the latest corporate responsibility report.

The industry as a whole, however, attracts criticism: too many food miles; too much packaging; too many additives; too much sugar, salt and saturated fat; poor food hygiene; poor health and safety for workers in the factories; too much waste; and prices which are too high for the value of food provided. Again, there is a literature: see, for example, the work of Felicity Lawrence (here and here) or Joanna Blythman (here and here). On sugar, see the work of Robert Lustig (e.g. here). On the interaction between the food system and power and inequality in developing countries, see Naomi Hossain in the latest IFPRI Global Hunger Index Report.

Thus, there are risks in promoting a ‘modern’ food processing and distribution sector.

In the best case, many jobs will be created up and down the value chain, with benefits to consumers in the shape of cheap, safe, and nutritious food, and with companies adhering to high standards of corporate social responsibility. A steady or even rising share of GDP, even as agriculture falls, contributing tax revenues and foreign exchange . . . nine jobs off the farm for every one on the farm (plus others in ancillary industries like packaging) . . .  food diversification to support changing tastes in urbanising economies . . . secure and equitable supply chains . . . stable prices, for producers and consumers . . . high standards of food safety . . . lower waste . . . protection of the environment . . . and high levels of transparency and accountability.

In the worst case, there is a Faustian pact. The jobs are there, but the food industry acts as a force which drives inequality and food poverty, damages health, destroys the environment, and reinforces corporate power. Is this outcome more likely in poorer countries where governance may be weak, regulatory capture more likely, the food industry just beginning to emerge, and the new food policy perhaps less well understood? 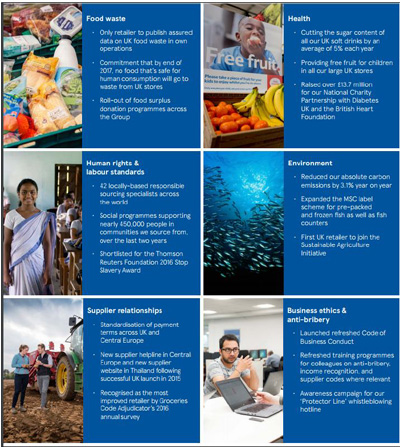 The hope must be that industrial policy and food policy can between them create the conditions to avoid the Faustian pact.

As far as industrial policy is concerned, I have recently proposed the elements of a progressive industrial policy, in the context of how to manage the simultaneous disruptive change associated with new technology, climate action, and the globalisation backlash – a challenge described as ‘Taming Cerberus’. This attempts to go beyond a market-oriented set of solutions, to focus also on the role of Government in fostering innovation and in supporting workers through transition. Political mobilisation also features. The key elements are:

In terms of food policy, the context is provided by earlier work on Food Policy Old and New, dating back to 2003 (Figure 4), supplemented by more recent thinking from 2015 on Next Generation Food Policy Research. The latter concluded (inter alia) as follows: 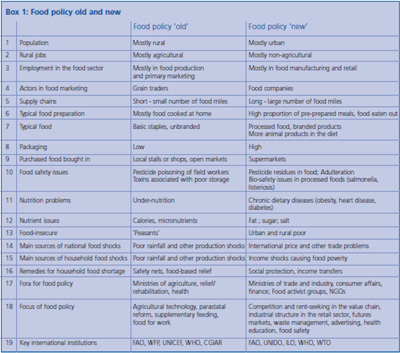 These are mostly familiar points, of course, from the authors cited earlier. They do, however, provide a food policy ‘gloss’ on new industrial policy: reinforcing the points about ethics and power; demanding a focus which is global in scope, especially as regards the operations of the private sector; and encouraging policy makers to think about the politics of policy change (on this see IFPRI’s kaleidoscope model).

The next challenge will be how to apply these insights at country level. For example, the World Bank Vietnam report, cited earlier, touches on many relevant issues. It has ‘Thematic Sheets’ on innovations systems, agribusiness incubation, payment for ecosystem services, contract farming, agro-based clusters, and food safety governance, all topics highly relevant to the new food policy (Figure 5). As an agricultural report, it perhaps has less on industrial concentration and consumer issues than a comprehensive report might provide. There is only one reference, in a footnote, to malnutrition, and just one to ‘plate waste’. There are, however, several references to the bargaining power of small farmers in the value chain. Definitely, this is an example on which to build. 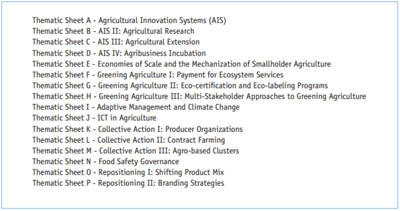 There was great enthusiasm in the late 1980s for national food security strategies, especially but not only in Africa. It seems to me the time has come to revisit the issue with a new, broader focus on the contribution the food sector can make to contemporary development challenges.