The UN Environment Emissions Gap Report has become an important and authoritative waymark in the annual round of climate change reports and meetings. The latest edition was published on 9 December. For anyone who has been on Mars for the past month, I summarise the main points below. But mainly, I want to draw attention to the important chapter on behaviour change in this year’s report. Declaration of interest: I have sat on the EGR Steering Committee since 2012.

So, the main points, widely reported in the press, and consistent with a number of other recent reports: 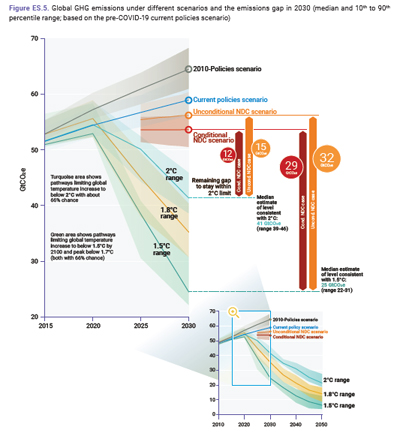 The report was published just a few days before the London climate ambition summit on 12 December, and just three weeks before the deadline for countries to submit revised or updated Nationally Determined Contributions to the UNFCCC. The situation with regard to commitments is therefore quite fast-moving. Thus, on 1 December, a  Report by the Climate Action Tracker confirmed that there is an urgent need for urgent, short-term action:

‘The recent wave of net zero targets has put the Paris Agreement’s 1.5°C within striking distance. . .  While 2050 net zero targets are commendable, governments must now adopt stronger 2030 targets (nationally determined contributions or NDCs) to deliver on their net zero goals, and close the remaining emissions gap to 1.5°C. However, there remains little positive movement by governments to improve their 2030 NDCNational Development Council targets since Paris in 2015.’

‘In 2020, global CO₂ concentrations continued to rise, reaching 412 ppm. This was despite a drop of -7% in annual emissions compared to 2019 as a result of the COVID-19 pandemic. The land sink was slightly weaker in 2020, thus there was a similar increase in atmospheric concentrations in 2019 and 2020.’

Can behaviour change be the way this crisis is solved? At first sight, the answer ought to be ‘yes’: we are constantly urged to eat less and/or less intensively-farmed meat, to fly less, to waste less, to recycle, and so on. However, the behaviour change chapter in EGR, led by Stuart Capstick, Radhika Khosla and Susie Wang, tells a more nuanced story.

First, it is true, household consumption accounts for around two thirds of global GHG emissions.

Second, however, not every household bears equal responsibility. The top ten per cent of income earners contribute 36-49% of the global total, the bottom 50% only 7-15% (Figure 2). About half of the top 10 per cent are in rich countries, the other half mostly in middle income countries. 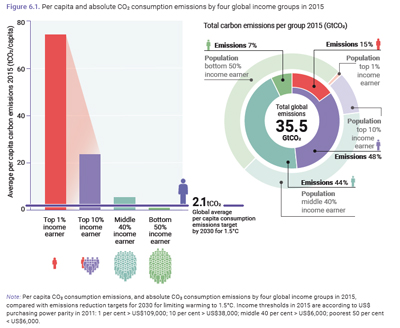 Third, large cuts are required by everyone above global average income if a Paris-compliant target of 2.1 t CO2 per capita in 2030 is to be reached – cuts of 90% for the top 10 per cent. The poorest 50% are below the target, however, and could increase consumption by three times.

Fourth, it is certainly possible to devise alternative lifestyle arrangements, for example in transport, food and housing. The standard analytical framework is Avoid-Shift-Improve (ASI): for example, travel less (avoid), travel by train rather than plane (shift), or increase fuel efficiency (improve). The chapter gives many practical examples.

Fifth, however, it is a mistake to assume that individuals can achieve lifestyle changes without institutional and cultural change. At the most basic level, ‘system change’ means, for example, providing low carbon transport infrastructure so that people have alternatives to cars or planes. Incentives play a role, as for example in subsidies for electric cars or home insulation. More fundamentally, however, people respond to culture and social influence, for example if there is a critical mass of people making lifestyle changes. See Figure 3 on the various mechanism to change lifestyles. In this context, citizen participation is key. As the report concludes:

‘Ultimately, the accomplishment of low-carbon lifestyles will require deep-rooted changes to socioeconomic systems and cultural conventions. The participation of actors and groups across civil society, as well as government, is needed to ensure this happens in a way that preserves people’s well-being while achieving substantial and rapid cuts in GHG emissions.’ 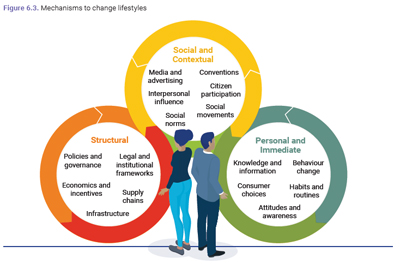 Point 5, in particular, is an important corrective to climate change narratives which point primarily at individual responsibility. I like Stuart Capstick’s Twitter strapline, which is ‘Dr Stuart 'individual AND system change' Capstick’. On the other hand, it is clear from the chapter that a bit of individual responsibility by the 800 million or so people in the world’s highest-income decile would not go amiss.