Counting carbon in global trade: why imported emissions challenge the climate regime and what might be done about it

Counting carbon in global trade: why imported emissions challenge the climate regime and what might be done about it

The two of us have collaborated on the rise of emissions traded across national borders, and the growing emphasis on measuring, reporting and certifying emissions, nationally and in global trade.

In 2019, we organized a workshop on the topic at ODIOverseas Development Institute (London) and published our reflections: ‘Climate action: why developed countries should track imported emissions, and how to make certification and labelling work for developing countries’.

Now, we have edited jointly a monograph with papers from the workshop: ‘Counting carbon in global trade: why imported emissions challenge the climate regime and what might be done about it’. We have also thought about the implications for the global climate regime.

The author list is extraordinary (Box 1): experts from Government and the private sector, from universities and think-tanks, and with developed and developing country perspectives. 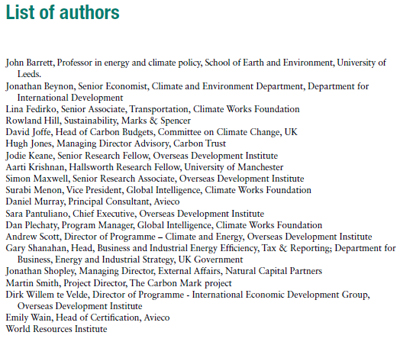 A full list of the 16 chapters in the report is pasted in at the end. Here, we summarise the main findings, dealing with the five questions we set out to cover. Examples and Figures are taken from the main report.

How and why is the geography of carbon emissions changing?

Three decades ago, most Greenhouse Gas (GHG) emissions originated in developed countries, and most were associated with domestic consumption. That is no longer the case. Emissions have grown rapidly in developing countries, but with a considerable share associated with exports. China now accounts for the largest share of total emissions, and with per capita emissions close to those of the EUEuropean Union (Figure 1). 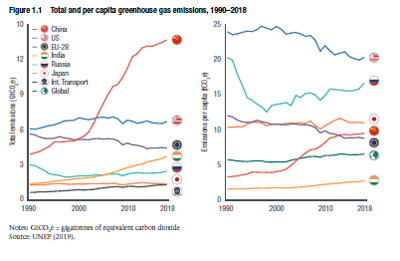 Emissions traded across national borders currently account for up to 38% of global emissions, with developed countries being net importers and emerging economies mostly net exporters (Figure 2). 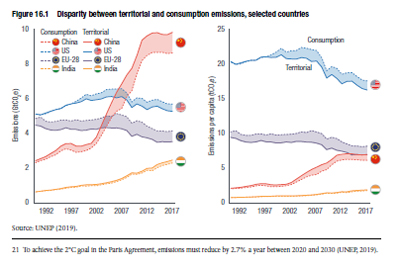 How are carbon emissions measured and how are the boundaries set?

National figures are mostly based on modelling. For companies to measure their own carbon emissions, or the emissions embodied in their products, they need to be able to define the boundaries of the company, and to allocate emissions correctly between subsidiaries, joint ventures and so on. They need to decide whether to include end-of-life and recycling issues. And, most important, they need to decide whether to count only the emissions included within their own direct control, or to include also emissions generated in the supply chain. The way to measure and report on carbon content is well established, thanks to initiatives like the GreenHouse Gas Protocol.

Emissions are formally classified as falling into Scope 1, Scope 2, and Scope 3:

It is easy to understand that measuring Scope 1 emissions is much easier than measuring Scope 3; and that measuring company emissions is much easier than measuring the emissions of dozens of different products, each of which contains dozens of different materials. In all cases, however, the principles are clear: accounting should be relevant, complete, consistent, transparent and accurate. Accounting should also be linked to action, through target-setting and reporting.

What are the opportunities and challenges of carbon reporting and certification?

There are various certification options available to companies large and small: for example footprint labelling from the Carbon Trust, CarbonNeutral Certification from Natural Capital Partners, or Smart Sustainability labelling from Avieco. In the UK, it is mandatory under the Companies Act 2006 to report on direct emissions within enterprises, and on energy use. New Streamlined Energy and Carbon Reporting arrangements were introduced in 2019, also covering Limited Liability Partnerships: more than 12,000 UK businesses are now covered by these regulations.

Standards can help spread best practice along supply chains and can create local spillovers, for example in technology or management practice. For example, Swire beverages reduced the packaging weight of soft drinks by 34%, and invested in more efficient refrigerators for retailers, saving up to 40% of electricity costs. Betty and Taylors, marketing tea and coffee, have worked with farming households in Kenya, Uganda and Malawi, to improve productivity and reduce pollution, for example by supporting clean cookstoves. Fair Trade offers a model, providing a premium payment for communities to invest in higher productivity and better community services.

On the other hand, the application of standards can be difficult and costly. Often, standards are adopted in developed countries and then pushed down the supply chain to second and third tier suppliers, offering few opportunities for consultation, and entailing additional costs. This can be described as a ‘green squeeze’ on suppliers.

There is also evidence of developing country companies outsourcing to other countries, in order to reduce their own headline emissions: a ban on domestic tanning factories led to India and China importing raw and tanned leather from Ethiopia, Kenya and Uganda, effectively externalising environmental costs.

What are the implications for developing countries?

Developing countries need to be aware of changing standards. Failure to comply may see them facing Border Carbon Adjustments, for example from the EU. To avoid a green squeeze, it will important for poorer countries and suppliers within them, including small farmers, to have a voice and to be able to participate in the design and implementation of standards. The objective is to be co-creators of rules and standards, rather than simply rule-takers.

Of course, being active in this way is not straightforward, especially when capacity is limited, resources are constrained, technology is carefully guarded, and power is concentrated elsewhere. Aid donors and philanthropic organisations have a role to play: in finance, technology and in support of innovative approaches to catalyzing action, for example by developing ‘climate clubs’.

How should the climate regime adjust to ensure efficient and equitable outcomes?

It is surprising that the international climate regime remains so strongly focused on territorial emissions rather than on consumption emissions and total footprints. Policy makers have begun to pay attention. For example, the Science and Technology Select Committee of the UK House of Commons has concluded that ‘we do not accept that territorial emissions should be the sole basis for international negotiations’. This seems an important point for the UNFCCC, given the renewed urgency of climate action, and the emphasis in 2020 on renewing National Determined Contributions, with greater ambition. The question is whether the UNFCCC, at an appropriate time, should consider asking countries submitting revised NDCs also to report on traded emissions, and propose how they might be reduced.

(A version of this summary was published here by the Climate and Development Knowledge Network (www.cdkn.org). A further article on the publication was published by the Thomson Reuters Foundation, here.) 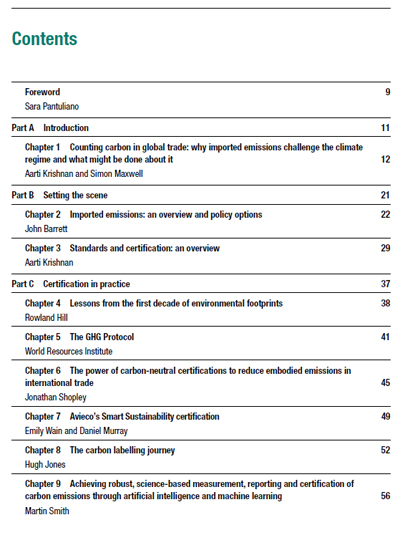 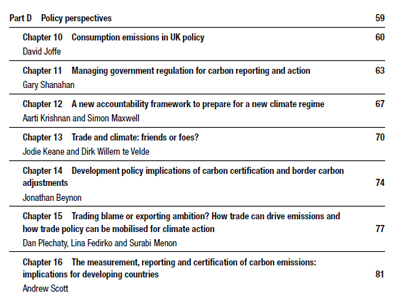