A commenary on aid reportage

A commentary on aid reportage

The Daily Mail and Mail on Sunday’s coverage of the aid issue has been striking, especially on the issue of 0.7 and the alleged ‘over-spend’ of £172m in 2015. The papers have initiated a petition against 0.7, which easily passed the threshold of 10,000 signatures required to trigger a Government response and 100,000 for a parliamentary debate: as of this morning, there had been 228,013 signatories. A DFID response to the media coverage does not seem to have dented the enthusiasm of aid critics. There will be a debate in Parliament on 13 June.

There are legitimate debates to be had about the volume of UK aid, its quality, and the specific mechanism of an annual 0.7 target. These are the daily meat and drink of those of us who work in the development community, and of oversight and scrutiny bodies like the International Development Select Committee, the Independent Commission on Aid Impact, and the National Audit Office. I write about these issues all the time – most recently here.

I was away when the Mail and Mail on Sunday stories came out, but read the Mail on Sunday story online.  I have posted a Word copy here. It is written by Simon Walters, the long-standing Political Editor of the Mail on Sunday, and runs to over 3600 words, plus 5 video clips. There are interviews with 13 MPs and Peers, several of them well-known critics of 0.7, who spoke against the legislation when it passed through Parliament in 2014/15.

I read the article several times, and then added annotations, as in this version, illustrated below. Apart from the occasional expostulation, there are links to sources which amplify or substantiate my comments. 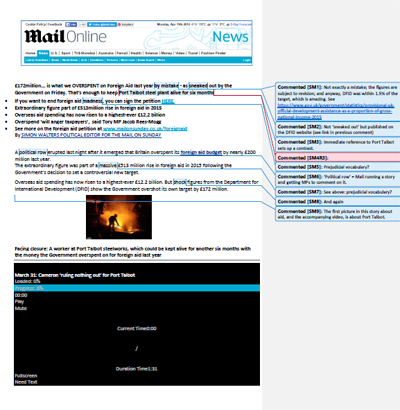 It would be interesting to hear the views of others about the article. I also think it would be a great exercise for development studies students to parse the article and learn about the issues.

It is important to emphasise that debate on these issues is entirely legitimate, especially when based on evidence.